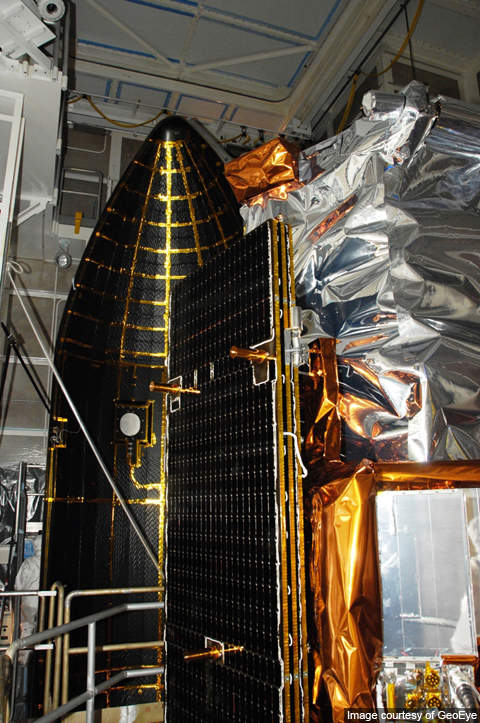 GeoEye-1 mounted on the booster – the satellite was prepared in a clean room environment. 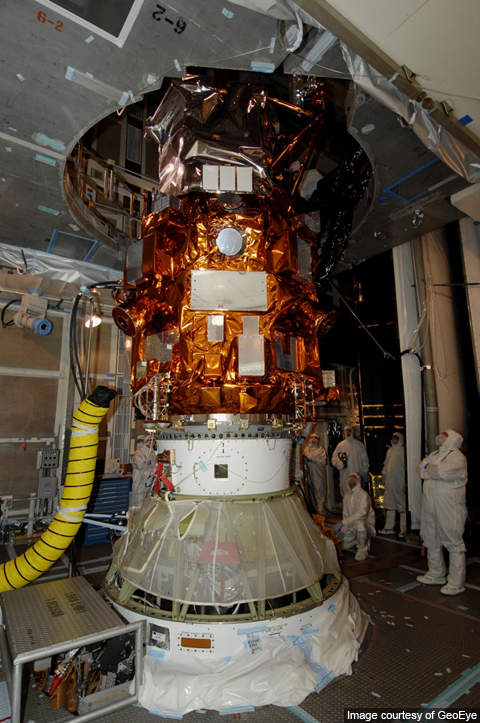 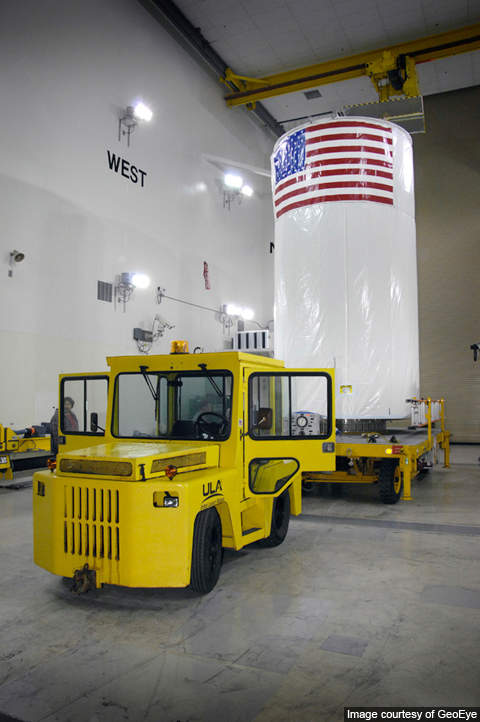 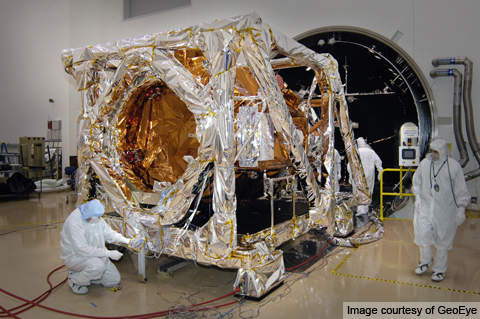 The spacecraft being packed to transport to Vandenberg Air Force Base for final launch preparations. 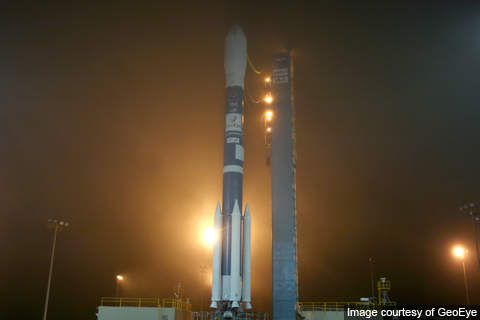 The GeoEye-1 (formerly known as OrbView-5) is an earth observation satellite (EOS) designed and manufactured by General Dynamics Advanced Information Systems (GDAIS) in Gilbert, Arizona, US.

Owned and operated by GeoEye, the next-generation spacecraft renders high-resolution images of the earth for civilian and military applications.

The satellite was launched into orbit on the piggyback of Boeing Delta II launch vehicle on 6 September 2008. It was released into sun-synchronous orbit 58 minutes after lift-off from Vandenberg Air Force Base, California. It operates at an altitude of 681km above the Earth with an inclination of 98° for a maximum of 98 minutes of orbital period.

“The GeoEye-1 (formerly known as OrbView-5) is an earth observation satellite (EOS).”

The satellite was launched under the National Geospatial-Intelligence Agency’s (NGA) NextView programme which was launched to procure high-resolution satellite imagery. It renders exact and relevant geospatial intelligence information to NGA for national security.

Google is the second major partner to access the GeoEye-1 imagery through GeoEye Archives. Both NGA and Google sponsored $502m in September 2004 to develop and launch the spacecraft within four years.

The GeoEye-1 was designed for a lifespan of seven years. It weighs around 1,995kg at launch and consumes 3.2kW of power. Designed to rotate with an orbital velocity of 7.5km/sec, the spacecraft accomplishes 12 to 13 orbits a day. It can revisit any geographic location on the earth for every three days.

ORBIMAGE signed an agreement with NGA in September 2004 to develop next generation Orbview-5 EOS which was renamed as GeoEye-1 upon the merger of ORBIMAGE and Space Imaging to form a new company named GeoEye.

GeoEye awarded a $209m contract to General Dynamics C4 systems in December 2004 to design and manufacture the GeoEye-1 spacecraft.

The environmental testing of GeoEye-1 was completed in April 2008. The satellite was scheduled for launch in April 2008 but delayed to August 2008. The launch date was postponed by a further month due to unavailability of the Big Crow telemetry relay aircraft.

The GeoEye-1 transmitted its first imagery of Kutztown University in Pennsylvania to GeoEye on 8 October 2008. NGA certified the satellite imagery as qualitative and accurate in February 2009. The operations of the GeoEye-1 were temporarily suspended in December 2009 due to constipation in the downlink antenna.

GeoEye is planning to launch the GeoEye-2 satellite in 2011 or 2012 to enhance the capacity of its forerunner, GeoEye-1.

An optical telescope, detectors and high speed processing electronic payload are also installed in the spacecraft.

“GeoEye-1 operates at an altitude of 681km above the Earth with an inclination of 98°.”

The Delta II was designed and built by Boeing Integrated Defence Systems. The vehicle can lift single, dual or multiple payloads simultaneously. It was assembled into two or three stage vehicles to conciliate wide range of mission requirements.

The ground station is designed and manufactured by MacDonald, Dettwiler and Associates (MDA) and installed at the Herndon headquarters in Virginia.

The satellite delivers large volume of data to four ground stations. The operational facility located at the City of Thornton in Colorado was also overhauled to utilise as a back-up ground station for the GeoEye-1. Communication between the control station and the spacecraft is enabled through a specific bandwidth assigned to the customer.