The Embraer ERJ-135 regional airliner, in service with Air France.

The ERJ-135 37 passenger jet airliner, seen here in the colours of Continental Express of Texas. 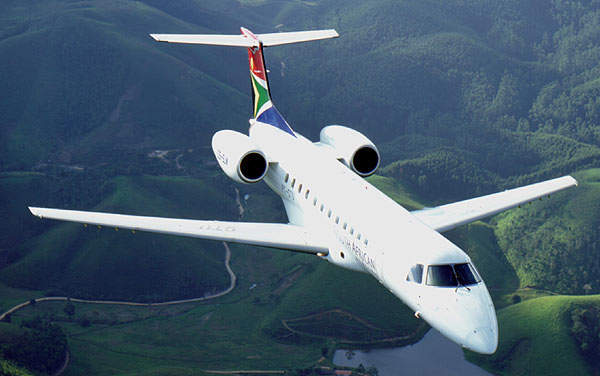 South African Airlink of Johannesburg has a fleet of ERJ-135 LR airliners.

The ERJ-135 is a 3,148km range, 37-passenger airliner and a member of the Embraer regional jet series. The launch of the aircraft was in 1997 and the first flight was carried out in July 1998. Certification from the Brazilian Centro Tecnico Aerospacial (CTA), the US Federal Aviation Administration (FAA) and the European Joint Aviation Authorities (JAA) was awarded in 1999.

A production facility for the ERJ-135 / 140 / 145 aircraft has been set up in Harbin, China, in a joint venture with Harbin Aircraft.

The aircraft will be based in Johannesburg, South Africa and will be deployed on regional routes.

Final assembly, systems integration and testing are carried out at Embraer’s aerospace manufacturing facilities in Sao Paulo. Manufacture of some sections of the aircraft is carried out by subcontractors and the subassemblies are transported to Sao Paulo for assembly. Norton supplies the nose radome, Sonaca of Belgium the rear and centre section of the fuselage, Gamesa of Spain the wings and ENAER of Chile the fin and tailplane.

The aircraft has a circular cross section fuselage, rear mounted high by-pass ratio engines, low mounted swept wings and a T-tailplane. The wings are of two spar wing design with a third spar to support the landing gear. The wing leading edges are made of aluminium.

The wings of the extra-long-range ERJ-145XR are fitted with winglets that increase lift and improve the efficiency of the wing at cruise speed by reducing the drag of the tip vortex. The T-tail is of aluminium box construction with aluminium leading edges on the tailplane. The fin leading edge is of composite construction.

An optional flight management system and global positioning system can be fitted. The aircraft has a Primus 1000 colour weather radar and a dual Primus II radio communications suite.

The main cabin, designed by the aircraft interior design company, C&D Interiors of the US, provides three-abreast seating for up to 37 passengers. The interior of the aircraft can easily be configured in a different arrangement to suit customers’ specific requirements.

There is an airstairs passenger door at the front port side of the cabin. The cabin and baggage compartments are air-conditioned and pressurised by a Hamilton Sundstrand air-conditioning system and Liebherr Aerospace pressurisation system. The oxygen system is supplied by EROS.

The aircraft has two rear-mounted Rolls-Royce engines mounted on pylons, supplied by Sonaca of Belgium. International Nacelle Systems supplies the engine nacelles and the optional clamshell thrust reversers. The engines are fitted with full authority digital engine control and the engine air intakes are fitted with an engine bleed air anti-icing system.

“The interior of the Embraer ERJ-135 regional aircraft can easily be configured in a different arrangement.”