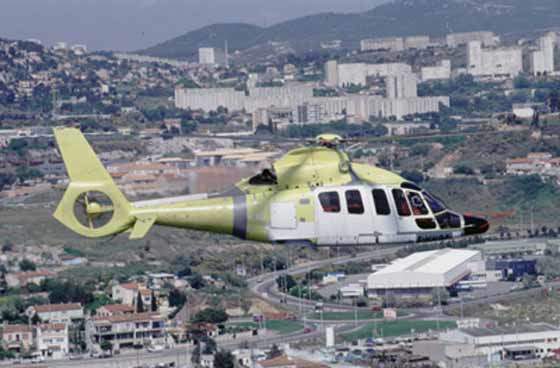 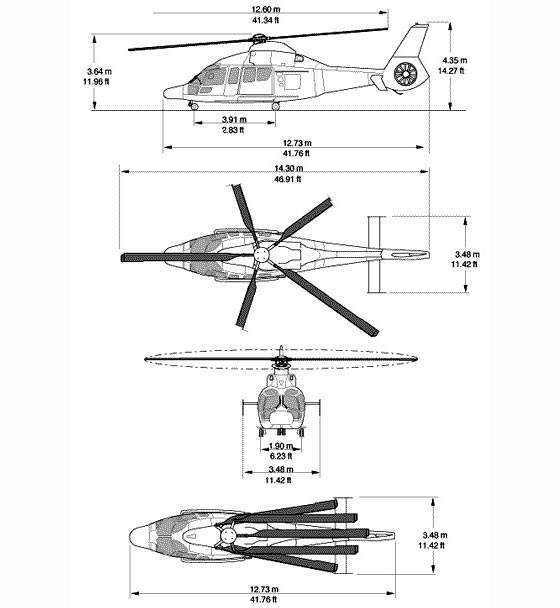 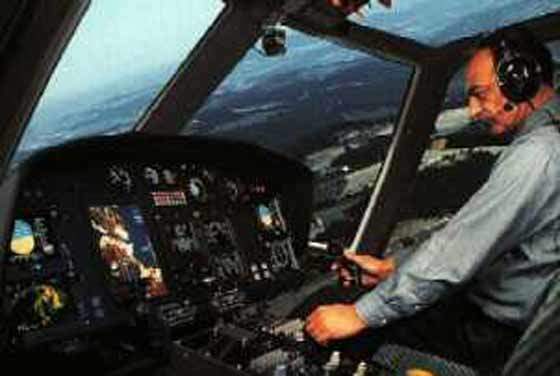 The view from the EC 155 helicopter cockpit. 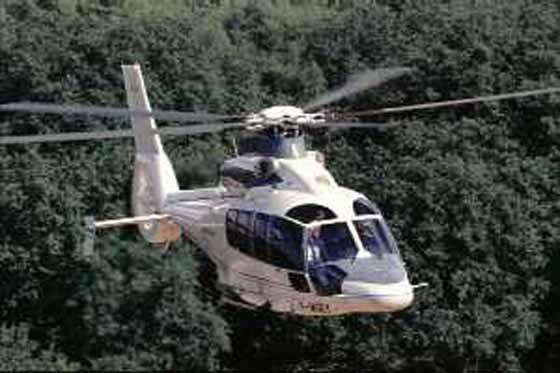 The Eurocopter EC 155 medium-lift twin engine helicopter is a development of the AS 365N Dauphin 2, with 40% larger cabin area, new rotor and ‘glass cockpit’. Eurocopter is a wholly owned subsidiary of the EADS (European Aeronautic, Defense and Space) company, formed by the merger of Aerospatiale Matra of France, DaimlerChrysler Aerospace of Germany and CASA of Spain. The 5t EC 155 is suitable for a variety of roles such as parapublic (law enforcement, fire fighting, emergency medical), commercial passenger transport, VIP/corporate and offshore operations.

The EC 155 first flew in 1997. It was certified by the French Civil Aviation Authority (DGAC) and the German Government Agencies (LBA) in 1999 and for single-pilot IFR (instrument flight rules) operations in January 2000.

Launch customer for the EC 155 B1 helicopter was the Hong Kong Government Flying Service. Deliveries of five helicopters began in November 2002. Over 60 EC 155 helicopters have been ordered, including 15 for the German Federal Border Guard (BGS), six for Shell Petroleum Development Company of Nigeria, four for Azerbaijan Airlines, three for Samsung in South Korea, two for the Royal Thai Police and one for Heli Air Monaco/Monacair for VIP transport of the royal family of Monaco.

An EC 155 helicopter has been used as a demonstrator for Eurocopter’s All Weather Helicopter (AWH) programme. First flight of the demonstrator took place in October 2002. The EC 155 was equipped with a DGPS (Differential Global Positioning System) and four-axis autopilot to allow steep approaches in zero visibility.

The EC155 has a new five-bladed Spheriflex main rotor with an extremely low vibration level. The shrouded Fenestron tail rotor was developed as part of the quiet helicopter research programme; it has ten blades asymmetrically spaced around the hub. The overall noise level of the helicopter is more than 3dB below the latest ICAO standards. The EC155B is also said by its makers to be the only helicopter in its class to offer an optional de-icing system.

The helicopter can be equipped with hoisting winches, cargo sling, fast-roping system, externally mounted life rafts and push out windows.

The EC 155 has an advanced integrated digital flight control system, the MEGHAS, from Thales (formerly Sextant) Avionics. The system is part of Thales ‘Avionique Nouvelle’ suite which is used in modular form on Eurocopter EC 120 and EC 145 helicopters. The system consists of four-axis autopilot and seven displays – two for flight controls including an electronic artificial horizon, two displaying route information, three central displays showing the engine and systems parameters and the warning indicator lights. An eighth optional, 6in x 8in multifunction screen is dedicated to mission equipment displays, for example electronic maps, FLIR (forward-looking infrared) and radar.

The EC 155 can carry up to 12 passengers with high-density seating, nine in the VIP configuration or six stretchers in the medevac role. The cabin is 2.55m long and 2.10m wide with one large sliding door on each side. The freight hold is aft of the cabin rear bulkhead.

American Eurocopter and Heritage Aviation Ltd, both based in Grand Prairie Texas, have developed the Advanced Iso-Quiet Cocoon Interior for the EC 155 helicopter, especially for VIP operations. The Advanced Iso-Quiet Cocoon Interior features a multi-wall cocoon concept with acoustical barriers embedded during manufacture of the composite wall panels. The Heritage interior allows the EC 155 to be equipped with a variety of seating configurations from a four-place VVIP configuration to a ten-place, high-density arrangement. An electrically actuated privacy window can be fitted. The interior system will be available for delivery in kit form in early 2003.

Four fuel tanks are sited under the cabin area and one in the bottom of the centre fuselage, giving a total standard fuel capacity of 1,225 litres.