Thrust Swivel, Side to Side 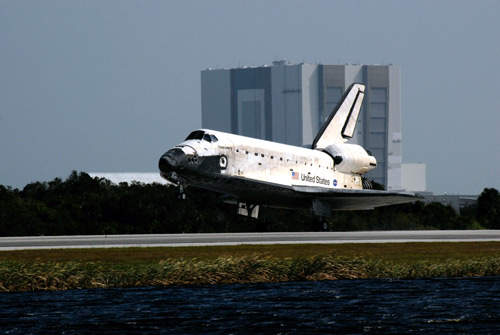 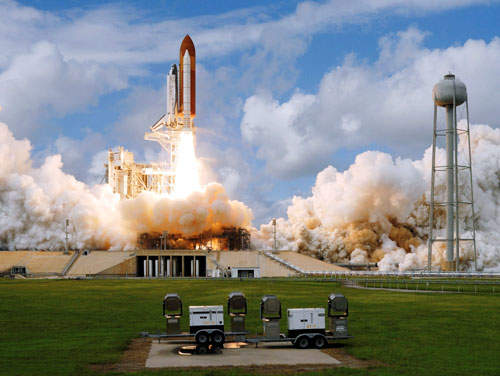 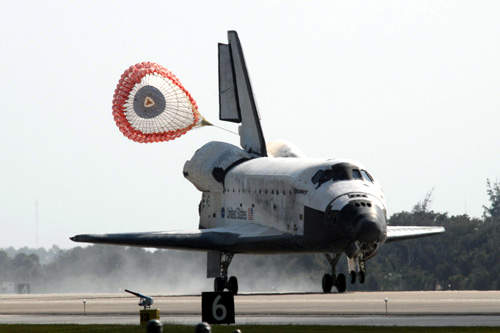 After touchdown, the speed-brake on the vertical tail and a drogue parachute are deployed to bring Discovery to a halt in November 2007. 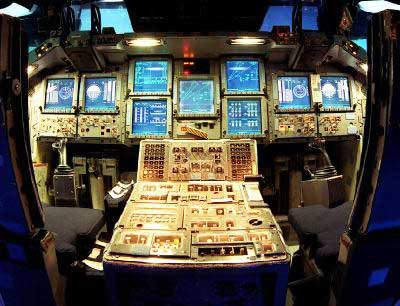 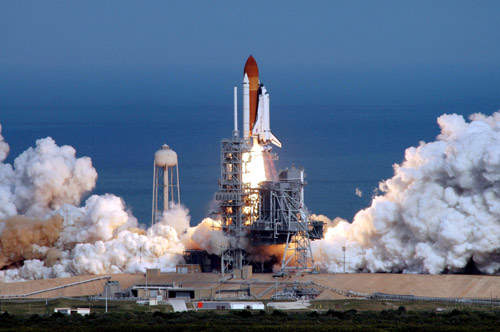 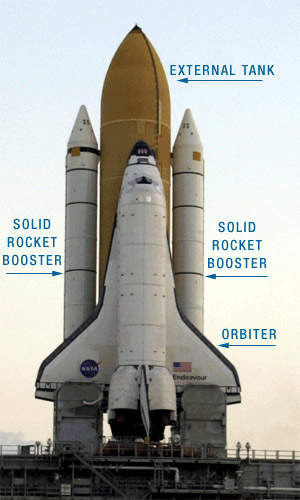 The NASA space shuttle with the Endeavour orbiter. 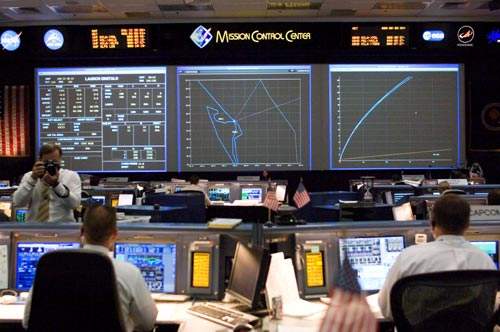 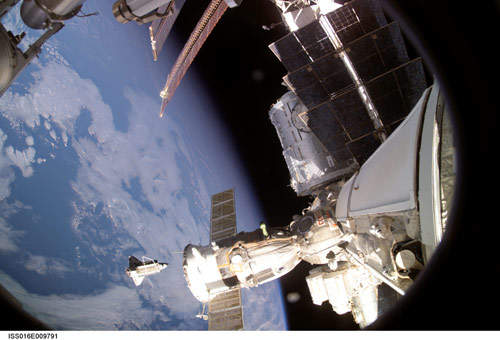 Space shuttle Discovery after undocking from the International Space Station in November 2007. A Soyuz spacecraft docked to the station can be seen in the foreground. 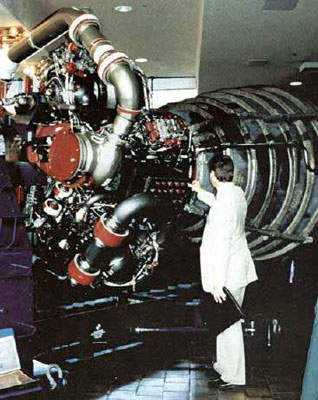 The space shuttle is the family of manned launch vehicles used by US National Aeronautics and Space Administration (Nasa) to place payloads and crews into low earth orbit. The first space shuttle was launched in April 1981. The first orbiter was the Enterprise which was a non-orbital test vehicle.

Nasa plans to retire the space shuttle programme in 2010, replacing it with the new Orion crew exploration vehicle (CEV) and Ares launch rocket, whose main mission will be to support exploration of the Moon and other destinations.

“Nasa plans to retire the space shuttle programme in 2010.”

The orbiter spacecraft is attached to two solid fuel rocket boosters which are recovered after launch and one external liquid-fuelled propellant tank that is ejected and not recovered. The orbiter space vehicle also has three main engines.

The shuttle missions, from lift-off to landing, take typically between seven and 14 days.

The three main stages of the mission are the launch and ascent into orbit, the orbit and mission activities, and then the re-entry and landing.

One of the main missions of the orbiter spacecraft is the delivery of systems and supplies to the International Space Station. Atlantis, Endeavor and Discovery successfully completed three missions during 2007.

Four missions were completed in 2008. In February 2008, the Atlantis orbiter transported the European Space Agency (ESA) Columbus science laboratory to the International Space Station (ISS), which was then installed by the crew. In March 2008, Endeavour delivered the first section of the Japan Aerospace Exploration Agency’s new laboratory module, Kibo, to the ISS. In May 2008, Discovery delivered further elements of Kibo and, in November 2008, Endeavour transported elements to complete the assembly of the ISS.

The first mission of 2009 is scheduled for February when Discovery will deliver the final pair of power-generating solar array wings and truss element to the ISS. This will be the 125th flight of the space shuttle programme.

The orbiter vehicle, built by Boeing Space Systems Division in Downey, California, is of mainly aluminium alloy construction. The propellant tank and the rocket boosters are jettisoned during ascent and only the orbiter space vehicle goes into orbit.

The orbiter space vehicle has swept double delta wings with four elevons and a swept vertical stabiliser with a rudder speed brake. Fairchild was responsible for the manufacture of the stabiliser tail. General Dynamics manufactured the centre fuselage section.

The fuselage is fitted with a very large payload or cargo bay approximately 18.3m in length and 4.6m wide. The three Orbiter space vehicles have the capability of carrying payloads up to 24,400kg and delivering them into a low earth orbit.

“The orbiter is attached to two solid fuel rocket boosters.”

Thermal radiators on the inner surface of the payload bay doors radiate collected heat into space and form part of the shuttle’s temperature control system.

The crew compartment is configured in three decks. The top deck is the flight deck which accommodates the cockpit and pilot’s seat, the commander’s station, and an aft control station. The glass cockpit is fitted with an 11-panel full-colour display multifunction electronic display system (MEDS).

The aft control station houses the controls and displays for docking and rendezvous manoeuvring, for the operation of the manipulator arm and for managing the deployment of payloads.

The orbiter is equipped with a global positioning system (GPS) and a suite of gyroscopes supplied by Northrop Grumman Electronics and Systems Integration for measuring attitude.

“The shuttle missions, from lift-off to landing, take typically between seven and 14 days.”

There are five AP-101S data processing and flight control computers from Loral Federal Systems at Bethesda, which monitor and control the orbiter systems.

The orbiter’s three main engines, manufactured by the Rocketdyne Division of Boeing at Canoga Park, California and each weighing 3,039kg, are installed at the rear of the fuselage in a triangular configuration. The engines are 4.3m in length and the engine nozzle is 2.3m in diameter.

The engines are gimbal mounted to provide control over the direction of thrust of the engines. The engines use liquid hydrogen fuel and liquid oxygen as the oxidiser, which is stored in the external fuel tank. The engines burn the fuel in two stages, in the first chamber and then in the main combustion chamber. The exhausted water vapour from each engine generates up to 2.09 million Newtons of thrust.

The vehicle’s orbital manoeuvring system (OMS), supplied by Boeing, is used to manoeuvre the vehicle into orbit, to carry out adjustments to the orbit and to change orbit, for example to carry out a docking manoeuvre. The system is contained in two housing pods located on the sides of the vertical stabiliser tail.

The OMS pods contain the hypergolic engines which burn monomethyl hydrazine fuel (CH2NHNH2) and nitrogen tetroxide (N2O4) as the oxidiser. Each engine can produce a thrust of 26,400N. The fuel and oxidiser tanks are pressurised by helium. The orbital manoeuvres are carried out by firing one or both of the OMS engines.

The attitude (direction of pointing) of the orbiter vehicle is adjusted or changed using the vehicle’s reaction control system (RCS) designed and manufactured by Boeing. Changes to the vehicle’s attitude are necessary for pointing telescopes and other research instruments and for deploying satellite payloads.

“The orbiters use satellite communications operating at S and Ku bands.”

The large external fuel tank is designed and manufactured by Lockheed Martin at the Nasa Michoud Assembly Facility in New Orleans. The tank carries two million litres of propellant, the liquid oxygen and liquid hydrogen fuel for the orbiter’s three main engines. The fuel tank is approximately 48m in length and 8.4m in diameter.

The two solid rocket boosters, on either side of the orbiter and the fuel tank, are manufactured by the ATK Thiokol Propulsion Group at Brigham City, Utah. The solid rocket boosters provide just over 70% of the thrust needed to launch the space shuttle. The other 30% of the power required for launch is provided by the orbiter’s three main engines.

“The engines are gimbal mounted to provide control over the direction of thrust of the engines.”

The shuttle’s main engines are ignited at six seconds before lift-off (T-6 seconds). At the designated lift-off time (T-0 seconds), the solid rocket boosters are ignited and the shuttle lifts off from the launch pad.

After lift-off, at T+1 minute, the shuttle’s three main engines are at full throttle. At T+2 minutes and at an altitude of 45km, the two solid rocket boosters separate from the orbiter space vehicle and the fuel tank and fall under gravity.

When the mission is completed, the procedure is started to prepare for re-entry and landing. The bay doors are closed. The reaction control system thrusters are deployed to rotate the orbiter from a nose-first to tail-first position with the bay doors pointing away from the Earth.

“The shuttle’s main engines are ignited at six seconds before lift-off.”

The friction resulting from orbiter’s speed through the atmosphere, approximately 28,000km/h, causes the surface temperature of the vehicle to rise to 1,600°C on re-entry.

Reinforced carbon-carbon materials protect the lower surface and the wing surfaces. Other sections of the vehicle are fitted with ceramic insulators and Nomex blankets.

After the re-entry phase the orbiter flies and glides, using banking turns to slow its descent. In the final approach to the Kennedy Space Center or to Edwards Air Force Base, the orbiter uses a steep angle of descent of about –20°. The Ku-band microwave landing system is supplied by AIL Inc. After touchdown the speed-brake on the vertical tail and a drogue parachute are deployed to bring the vehicle to a halt.