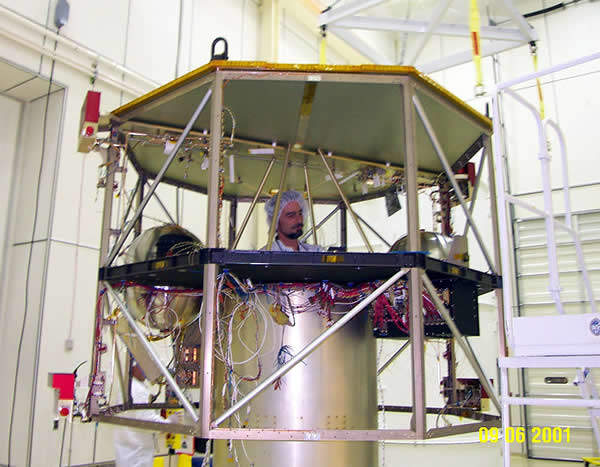 A technician working on the Contour spacecraft. 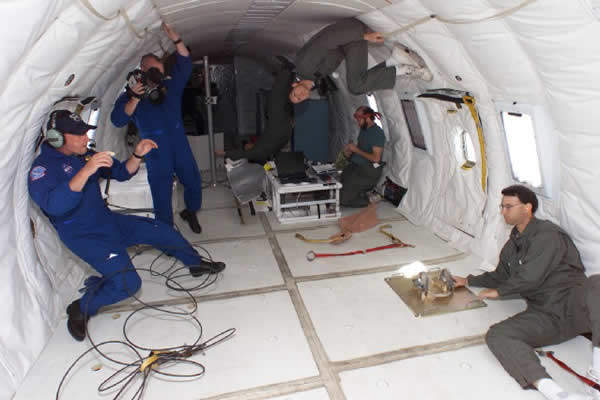 The Traveling Wave Tube Amplifier (TWTA) flight unit #1 being integrated on the spacecraft. 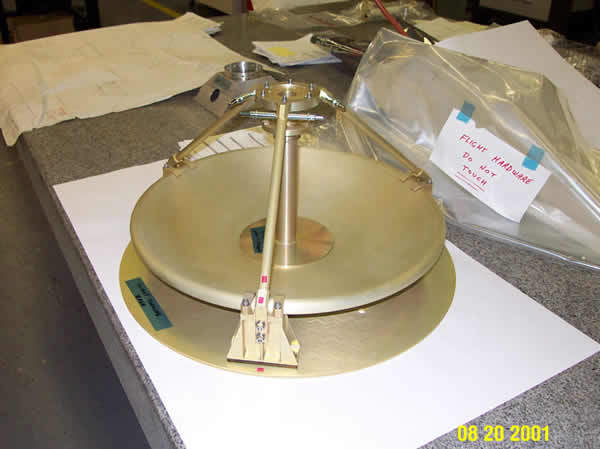 The high gain antenna in the process of assembly. 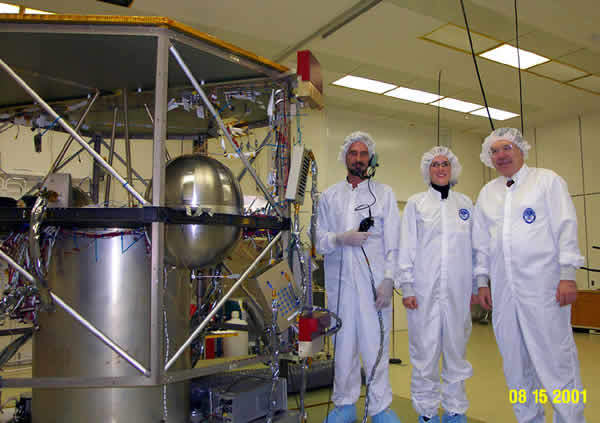 The Contour spacecraft is subject to extensive testing. 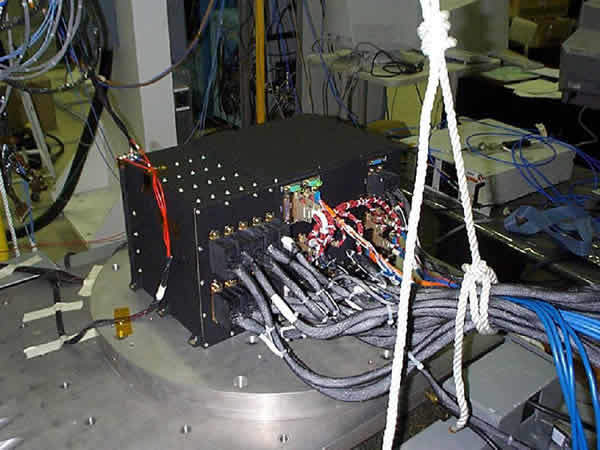 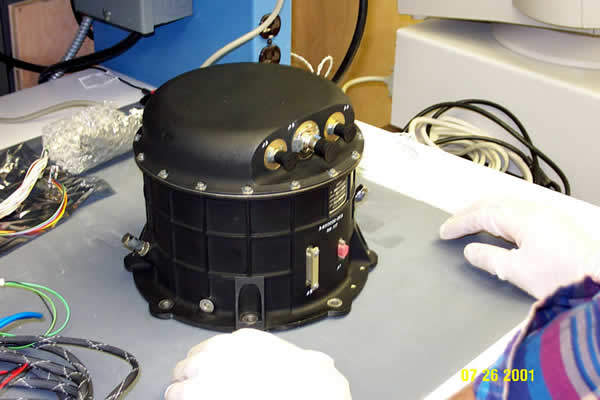 The Contour gyro was supplied by Honeywell. 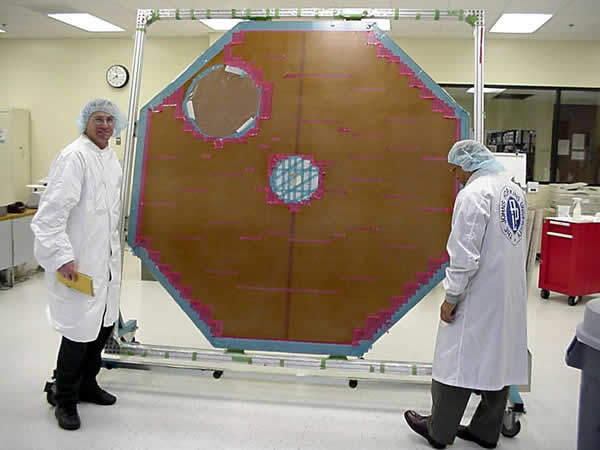 The aft panel of the Contour spacecraft. 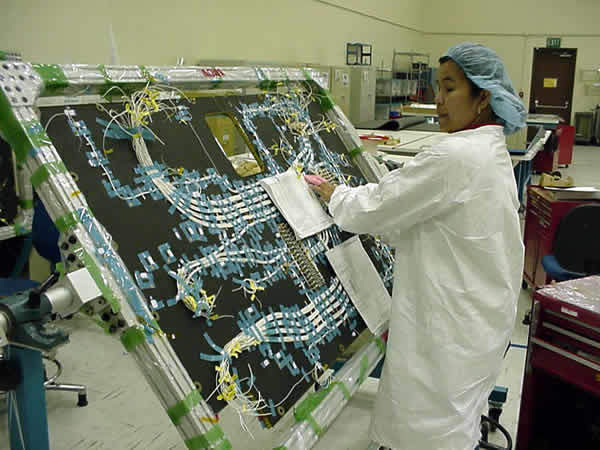 Backside wiring on the Contour spacecraft.

Contour was part of Nasa’s Discovery programme. It was a joint project between the Johns Hopkins University Applied Physics Laboratory (APL), Maryland, and Cornell University, New York. Its aim was to send a small spacecraft to examine comets Encke and Schwassmann-Wachmann 3 and bring samples back to Earth. Other participants in the $154 million project were Von Hoerner & Sulger and Nasa’s Goddard Space Flight Center.

The design of the spacecraft was simple, with few articulated mechanisms. The solar array was body mounted and did not require drive motors. The mission geometry allowed it to use fixed, passive, existing antenna designs.

Other than the Contour remote imager spectrograph (CRISP), all instrument and antenna pointing was controlled by moving the spacecraft. A dust shield made of Nextel and Kevlar protected against impacts for the dust sizes and densities expected at the three encounters.

Contour was launched from Cape Canaveral. On 12 November 2003, the Contour spacecraft was due to visit Encke, which has the shortest orbital period of any known comet – 3.2 years to circle the sun. Schwassmann-Wachmann 3 has probably come close to the Sun less often than Encke has so it is likely that a smaller fraction of its ice has evaporated. Several large pieces split off the nucleus in 1996, and it was hoped that when Contour flew by on 18 June 2006, it would see areas of exposed, relatively unaltered subsurface material.

Three Earth-gravity assist manoeuvres would have been used to achieve the two comet encounters over the three-year period. The mission design was flexible enough to allow the spacecraft to visit and examine any as yet unknown comets that came close enough to the Earth. To identify suitable candidates for interception as early as possible, the Contour project supported a worldwide early warning search programme for comets approaching from the fringes of the solar system.

A Contour mishap investigation board was set up by Nasa to examine the probable causes of failure. The board concluded that there could have been four possible causes – overheating of the spacecraft due to solid rocket motor exhaust, failure of the solid rocket motor, collision with space debris or meteoroids and loss of control of the spacecraft.

The Contour remote imager / spectrograph (CRISP) weighed 8.6kg and used 29.1W of electricity. CRISP was supposed to actively track the comet’s nucleus near the spacecraft’s closest approach, taking high-resolution images, colour images through ten filters and an infrared spectral map. The imager could pick up wavelengths from 450nm to 770nm and take pictures with a resolution of 1,024 by 1,024 pixels. The spectrograph could pick up wavelengths of 800nm to 2,550nm and its picture pixel resolution is 256 spatial by 256 spectral.

“Contour was launched from Cape Canaveral.”

CRISP’s scan mirror was the critical component that would have allowed the instrument to take high-resolution images (as good as 4m a pixel) while passing as close as 100km from its target at high velocity. The imager and spectrometer both ‘look’ at a scan mirror. The mirror steers the fields of view to track the comet nucleus and take out its relative motion so that images can be obtained without smears.

The Contour aft imager (CAI) weighed 1.8kg and used 2.5W. Both the CRISP and the CAI were supplied by the John Hopkins University APL.

The dust analyser (CIDA) weighs 11kg and requires 2.5W and was supplied by Von Hoerner & Sulger.

The neutral gas ion mass spectrometer (NGIMS) weighed 9.3kg and used 23.3W. It was to measure the abundance and isotope ratios for many neutral and ion species in the coma of each comet during the flyby. These measurements together with data from the dust experiment would have contributed to the understanding of the chemical composition of the nucleus itself and allow differences between the comets to be studied. This instrument was supplied by Nasa’s Goddard Space Flight Center (GSFC).