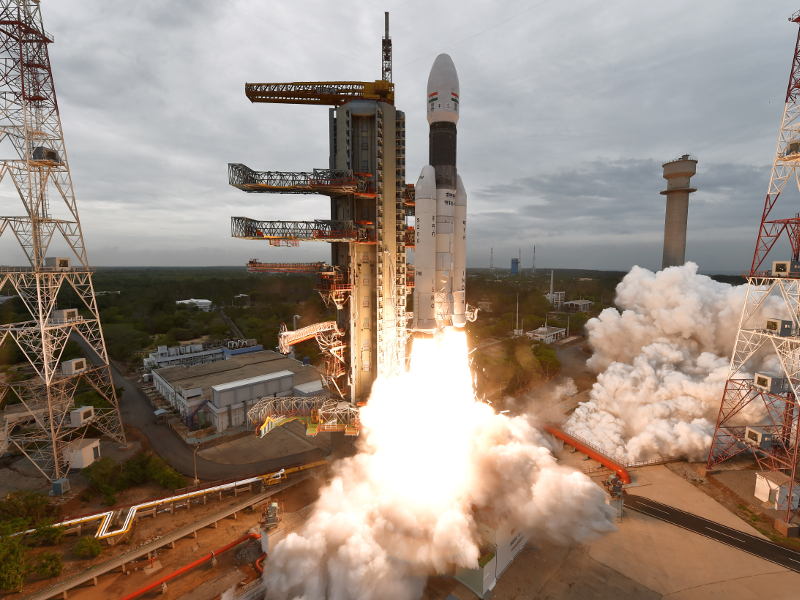 Chandrayaan-2 was successfully launched on 22 July 2019. Image courtesy of ISRO. 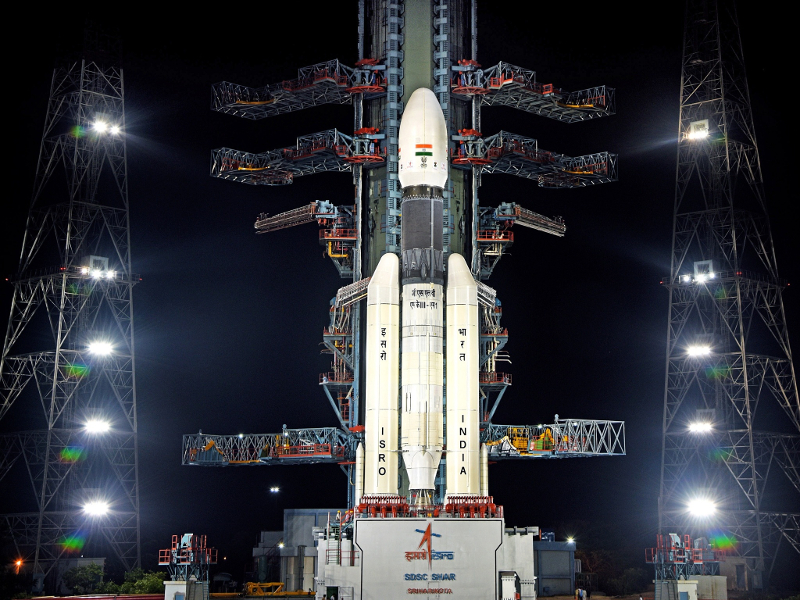 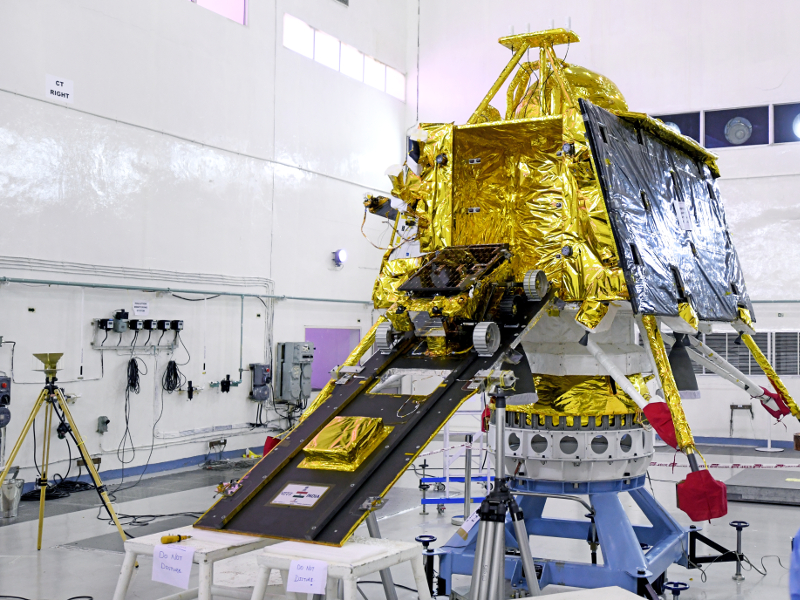 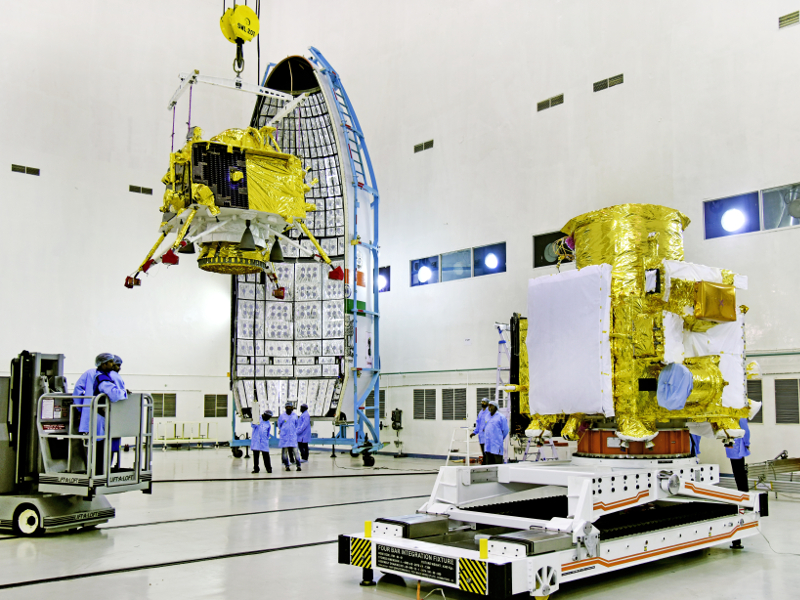 The Chandrayaan-2 lander is named Vikram. Image courtesy of ISRO. 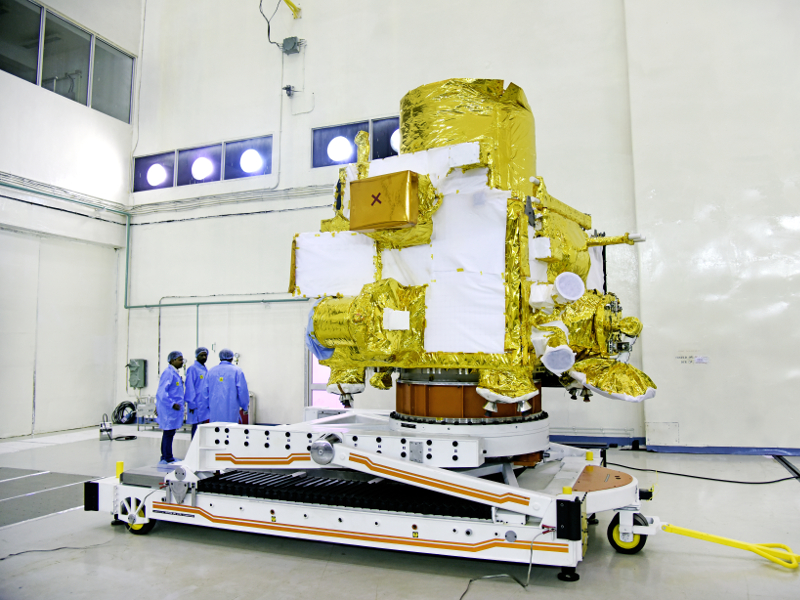 The Chandrayaan-2 orbiter was designed to orbit the moon. Image courtesy of ISRO.

Chandrayaan 2 is Indian Space Research Organisation’s (ISRO) second lunar exploration mission. It is the advanced version and continuation of the successful Chandrayaan-1 mission launched in 2008.

The Chandrayaan-2 mission was designed to demonstrate ISRO’s capabilities in soft landing and deploying a rover on the moon’s surface to conduct in-situ experiments and tests.

It was intended to study the lunar topography, geology, conditions of the lunar exosphere, presence of hydroxyl elements, and forms of water on the moon’s surface.

The mission included an orbiter, a soft lander, and a rover. The orbiter was designed to orbit the moon, whereas the lander carrying the rover was intended to reach the lunar surface.

Chandrayaan-2 was to be launched on 15 July 2019, but postponed to 22 July as a technical issue was identified in the launch vehicle system, GSLV Mk-III. ISRO successfully launched Chandrayaan-2 from the second launch pad at Satish Dhawan Space Centre SHAR, on 22 July 2019.

Upon completion of two successful de-orbiting manoeuvres, the lander deviated from its pre-planned trajectory during the powered descent phase and crash-landed on the moon’s surface in September 2019.

The Chandrayaan-2 mission was the next advancement in Indian lunar exploration following the Chandrayaan-1 spacecraft, which was launched aboard PSLV launch vehicle carrying a lunar orbiter fitted with 11 instruments, which comprises five that are Indian, three European, two American, and one Bulgarian.

The mission life of Chandrayaan-1 ended in August 2009 after successfully meeting its objectives. The mission’s major accomplishment was the detection of water molecules near the poles of the moon.

Chandrayaan-2 was originally scheduled at the beginning of the decade but was delayed due to the exit of Russian Federal Space Agency (ROSCOSMOS), which was to provide a rover for the mission. It sought for a programmatic re-alignment in 2013.

With a total weight of 3,877kg, the spacecraft carried 13 Indian payloads along with a passive experiment.

“The payload for Chandrayaan-2 mission included three modules, an orbiter, a lander named Vikram, and a rover named Pragyan.”

The integrated module was initially placed in the geosynchronous transfer orbit (GTO), from where the payload was supposed to reach the moon’s orbit with the help of the orbiter propulsion module.

The GSLV Mark III launch vehicle is a three-stage heavy-lift rocket with two solid strap-ons, a core liquid booster, and a cryogenic upper stage. The vehicle can carry a 4t class of payload to the GTO.

GSLV Mark III is 43.43m tall and has a diameter of 4m and a lift-off mass of 640t. Its cryogenic upper stage, designated C25, is powered by cryogenic engine (CE)-20, which operates on gas generator cycle using LOX/LH2 propellants.

The total cost of the Chandrayaan-2 mission was estimated to be approximately Rs10bn ($141m), of which 25% was spent on the launch and 75% on the satellite.

The payload for Chandrayaan-2 mission included three modules, an orbiter, a lander named Vikram, and a rover named Pragyan.

The 3,200kg orbiter carrying five instruments was planned to be placed in the lunar polar orbit 100km above the moon’s surface.

The Chandrayaan-2 large area soft X-ray monitor (CLASS) and solar X-ray monitor (XSM) instruments were designed for mapping the elements available on the moon’s surface, while the second instrument, which was an L and S-band synthetic aperture radar (SAR), was intended for identifying the constituents of lunar surface such as water ice.

An imaging IR spectrometer (IIRS) instrument was designed for mapping the lunar surface over a wide wavelength to study the presence of water, hydroxyl, and other minerals.

A Neutral Mass Spectrometer (ChACE-2) was fitted to perform a detailed study of the moon’s exosphere. Terrain Mapping Camera-2 (TMC-2) was installed to prepare a three-dimensional map for studying the lunar mineralogy and geology.

Details of Vikram, the Chandrayaan-2 lander

Vikram was supposed to land on the lunar surface using a four-leg landing unit.

The Pragyan rover was a six-wheeled vehicle, which carried a laser-induced breakdown spectroscope (LIBS) and an alpha particle-induced X-ray spectroscope (APIXS) to perform an elemental analysis of the surface.