1 pilot and 9 passengers, or 2 pilots and 8 passengers 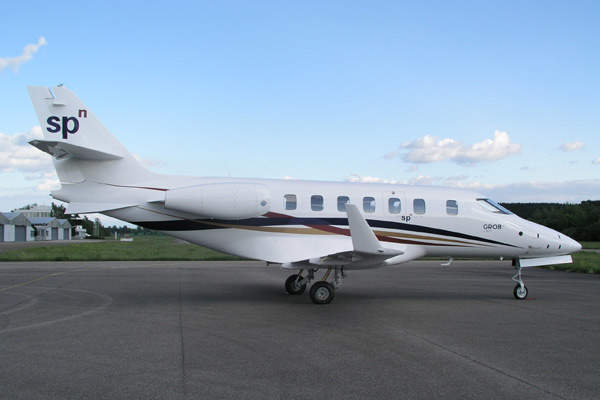 The all-composite SPn combines the speed of a jet aircraft with the flexibility of a turboprop. 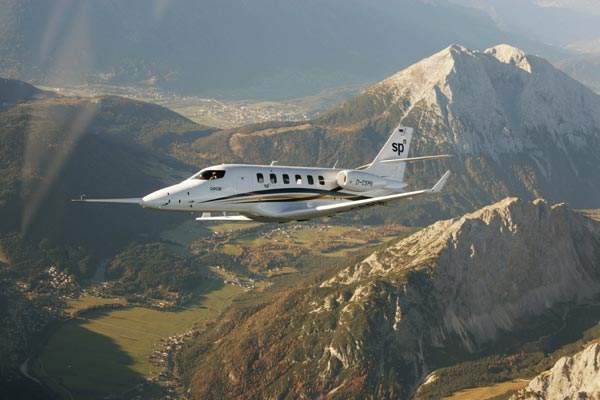 The maiden flight of the Grob Aerospace SPn aircraft took place in July 2006. 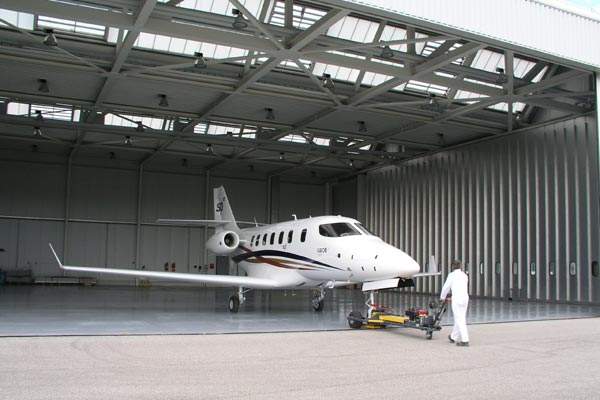 The SPn can use small and unpaved grass or gravel runways close to the passengers' destinations. 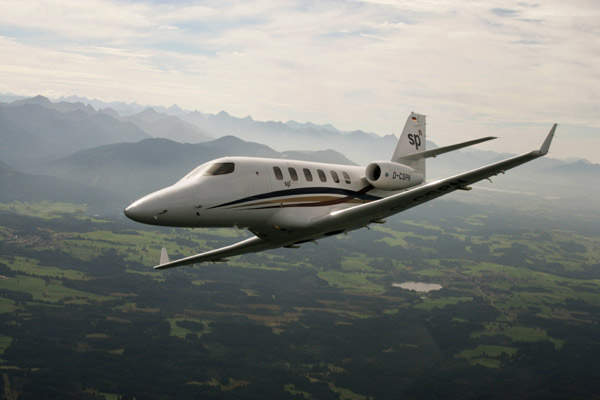 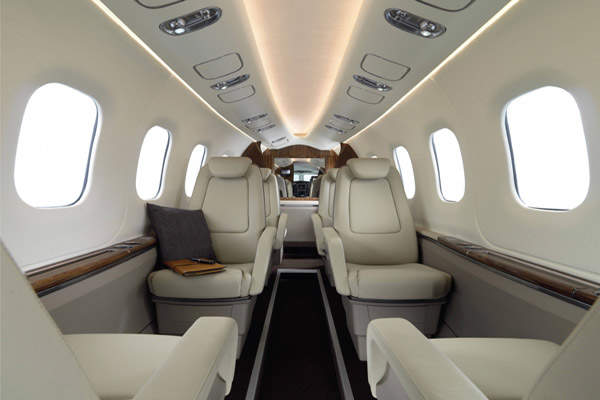 The SPn can seat eight passengers in a business layout or six passengers in the executive layout (shown). The interior has been designed by the Porsche Design Studio. 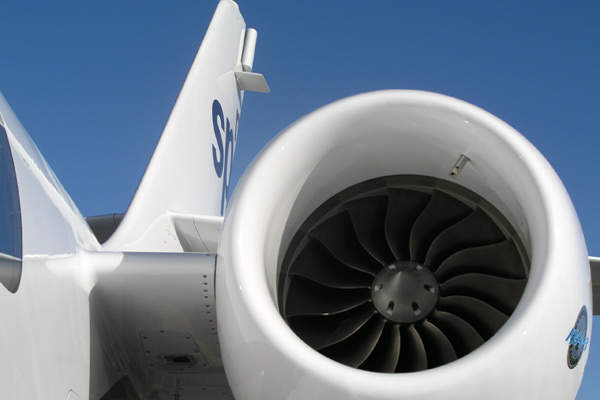 The SPn is powered by two Williams FJ44-3A turbofan engines, fitted with FADEC and rated at 1,270kg thrust. 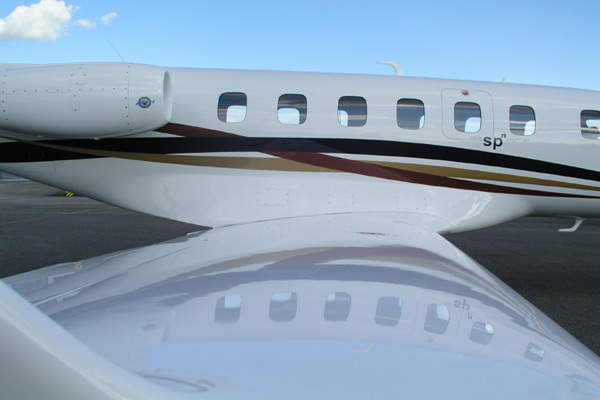 The SPn cabin can be rapidly converted for passenger, cargo or air ambulance missions.

Grob Aerospace announced the development of the Grob SPn light business jet in June 2005 at the Paris Air Show. The first full-size aircraft was assembled in May 2005 at the Grob Aerospace design and production centre in Tussenhausen-Matissies, near Munich.

The all-composite SPn combines the speed of a jet aircraft with the flexibility of a turboprop. It has a range of 3,334km and maximum payload of 1,130kg but can use small and unpaved grass or gravel runways close to the passengers’ destinations.

The SPn can operate as an up to eight-passenger jet, a combined passenger and cargo aircraft, an all-cargo aircraft or as an air ambulance for one or two stretcher patients.

Grob Aerospace’s partners in the development are: Williams, which is supplying the engines; Honeywell, which is responsible for the avionics system; and ExecuJet Aviation Group based in Switzerland. ExecuJet is responsible for maintenance support and has been appointed as the sales distributor.

In August 2008, Grob Aerospace GmbH filed for preliminary insolvency, citing delays in the SPn programme as the cause. The company has been unable to secure additional funding and was declared insolvent on 31 October 2008.

The aircraft will be compliant for single-pilot operation under both VFR day / night, IFR and known icing conditions.

Orders have been received for over 100 aircraft, including 25 for PlaneSense, a US fractional ownership company.

The Grob SPn utility jet is a low-wing, twin-engine jet, with conventional tail design and carbon-fibre airframe and wing structure. The high-strength composite structure is lighter than a similar-sized metal aircraft and also contributes to lower maintenance and operating costs.

The minimum certified service life of the airframe is 28,000 flight hours. The major airframe parts withstand loads up to +3.1g to -1.24g. In addition to the carbon fibre structure, the wing attachment points are of titanium construction.

“The SPn combines the speed of a jet aircraft with the flexibility of a turboprop.”

The throttle, spoilers, flaps, park and emergency brake controls, and the engine control panel are installed in the console between the pilots.

The large cabin has a volume of 11.5m³ and is 164cm high. The cabin shape provides comfortable head space and the length (5.10m) accommodates eight seats in a double club configuration.

There is a choice of two different layouts – an eight-seat business or six-seat executive layout. The interior has been designed by the Porsche Design Studio.

The cabin has a quick-change capability with a plug-in modular interior for fast rearrangement of the seating, cabin units or cargo facilities. The seats are track-mounted with easily released pressure clamps. Custom track-mounted interior units, e.g. for an air ambulance or an optional cargo netting system, can be installed. The cabin can be converted from an all passenger layout to a cargo cabin or vice-versa in less than an hour. The cabin can carry standard sized pallets.

The aircraft is powered by two rear-mounted Williams FJ44-3A turbofan engines, fitted with full authority digital engine control (FADEC). The engines are rated at 1,270kg thrust, providing a thrust to weight ratio of 0.40.

The integral wing tanks formed by the wing shell, webs and ribs have a capacity of 2,000kg, approximately 660gal. There is a gravity refuelling port on each wing and a single-pressure refuelling system can be installed optionally. During normal operation, fuel feed is via one main jet pump per engine. Each engine is also fitted with a second electrically driven submerged centrifugal boost pump to provide pressure for starting and to serve as a backup for the main pump.

The jet is fitted with a 28V DC power system, with two Honeywell 28V-400A starter generators and two lead acid batteries. A 28V DC external power socket can be used for charging the main aircraft battery while the aircraft is on the ground.

Grob Aerospace has selected Honeywell to supply the RE100 auxiliary power unit (APU) as an option for the SPn. The RE100, controlled by FADEC, weighs 115lb and delivers pneumatic output of 35lb a minute at 50psi and electrical output of 400A at 30V DC. It has an operating ceiling of 9,150m.

Liebherr Aerospace is supplying the main trailing link landing gear as well as the nose landing gear. The extra clearance provided by the landing gear and carbon brakes allows the SPn to land on unprepared airfields.

A 206bar hydraulic system, driven by a DC electric motor, activates the landing gear extension and retraction, the brake system, nose wheel steering and operation of the spoilers.