Baron G58 taking off from the HBC service centre. 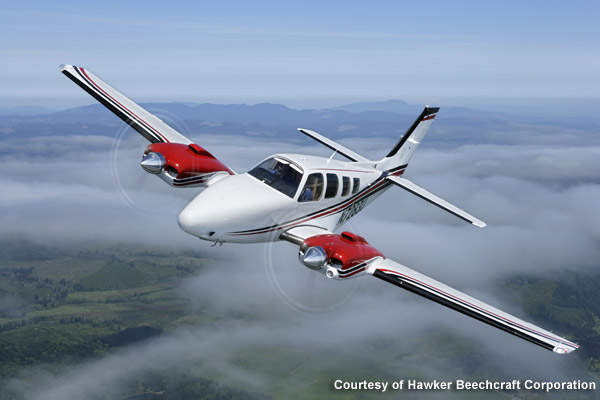 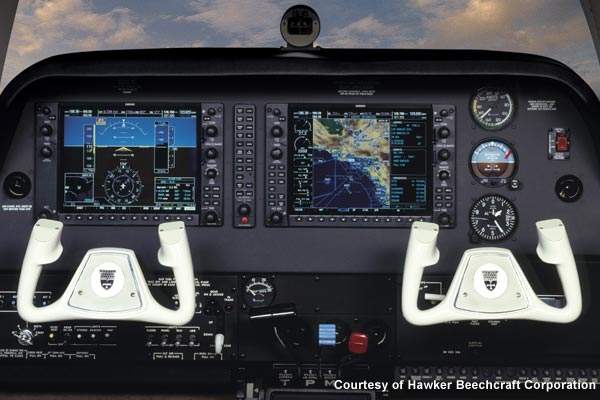 Baron G58 is equipped with the Garmin G1000 avionics suite.

In 2004 Raytheon upgraded the aircraft with a fully integrated glass cockpit along with a Garmin G1000 avionics suite. The aircraft’s name was changed to Beechcraft Baron G58 in April 2005, and it was certified in December 2005.

The Raytheon Aircraft Company was acquired by Hawker Beechcraft Corporation, US (HBC) in 2007. The aircraft is currently manufactured by HBC.

The upgraded Beechcraft Baron G58 made its public debut at the 36th annual Sun ‘n’ Fun Fly-in Expo held between 13th and 18th April 2009 in Lakeland, Florida, US.

On 21 June 2010, the Beechcraft Baron G58 was certified by the Civil Aviation Administration of China (CAAC).

In July 2010, the Beechcraft Baron G58 became the first aircraft of HBC to be approved for operations at the London City Airport.

The Baron G58 has two variants known as the turbocharged Baron G58TC and the pressurised Baron G58P.

Both variants were introduced in 1976 and are powered by 240kW (325hp) Teledyne Continental TSIO520 engines. The panel system layout, which encompasses a throttle, gear, flap, propeller and mixture controls, was replaced with industry-standards features in 1984.

The limited and restricted head room for the pilot and co-pilot resulted in the termination of Baron G58TC / G58P aircraft’s production in 1985.

As of 2007, around 38 G58 aircraft had been delivered to different customers worldwide. On 20 May 2008, the Artur Przygoda of Poland awarded a contract to the Hawker Beechcraft Corporation (HBC) to supply the European Aviation Safety Authority (EASA) certified Baron G58 piston aircraft. The delivery was made in May 2009.

The Baron G58 features an ice and rain protection system, which encompasses automated pneumatic de-icing boots, a standard electro-thermal propeller de-ice system, and standard heated stall warning vane and fuel vents. The aircraft also includes a stand-by alternator and secondary back-up battery for providing the required electricity to the engine when the primary battery’s function fails. The multiple aircraft buses have increased the reliability and redundancy of the G58.

The flight deck of the Beechcraft Baron G58 features a fully integrated Garmin 1000 avionics suite. The aircraft is equipped with two large-format liquid crystal displays (LCDs) for providing flight data, engine performance, and graphical navigation. A GFC 700 autopilot system is installed in the flight deck to reduce the workload of the pilot.

“Multiple aircraft buses have increased the reliability and redundancy of the Baron G58.”

The Beechcraft Baron G58 features a comfortable 137ft³ cabin. The spacious and comfortable cabin can accommodate a pilot and five passengers with more leg room for all the occupants. A large one-piece wrap around windshield and six very large side passenger windows are fitted in the cabin to enhance the visibility for both passengers and pilot.

The squared oval-shaped cabin also features an XM satellite entertainment system and nose baggage area for placing the luggage, which is fully accessible to passengers during the flight.

“The cabin accommodates a pilot and five passengers.”

The IO-550-C engine is a six-cylinder, fuel-injected, air-cooled engine equipped with overhead inclined valve design. It can produce a crankshaft speed of 2,700rpm.

The dry and average weights of the engine are 188kg and 210kg respectively.

The Beechcraft Baron G58 is fitted with a throttle-controlled retractable landing gear. The landing gear is equipped with an electromechanical extension and retraction system.

The service ceiling of the aircraft during take-off is 5,669m, while it is 2,133m during landing. The maximum take-off weight is 2,495kg.