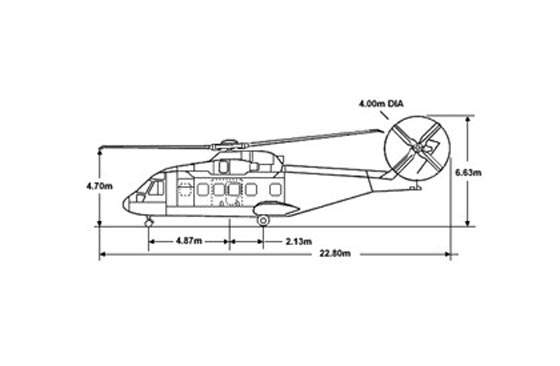 Technical drawing of the AW101 helicopter: side elevation showing dimensions. 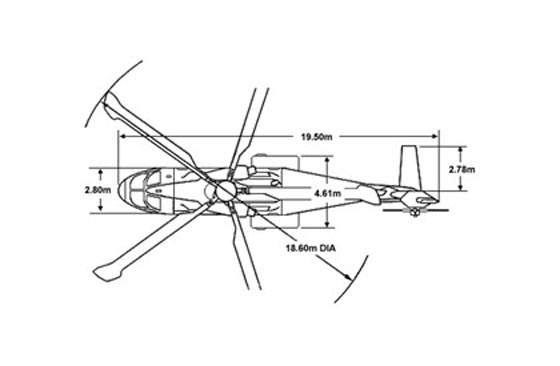 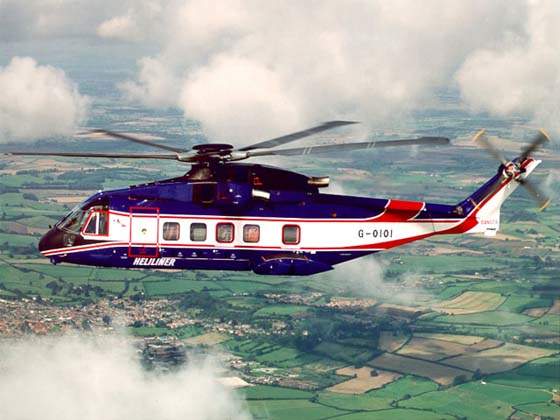 AgustaWestland AW101 (previously the EH101) medium-lift helicopter has been developed to be a multi-role rotary-wing platform. 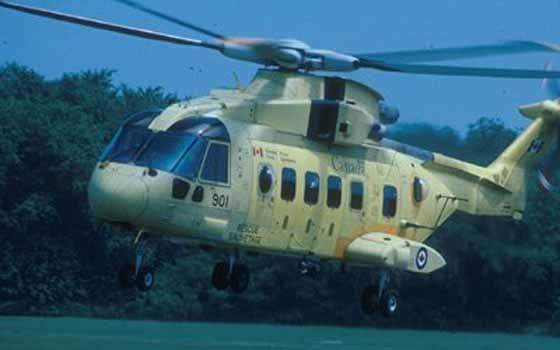 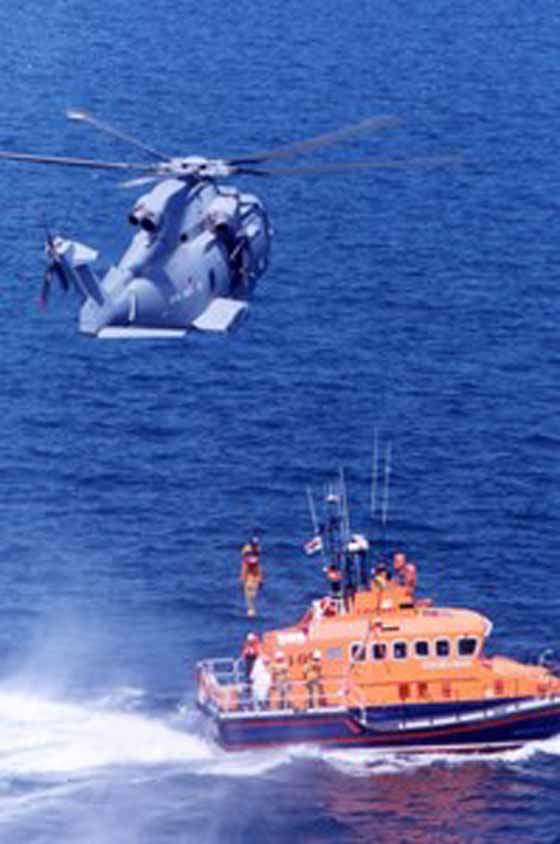 A Royal Navy AW101 winching aboard a 'victim' from a RNLI lifeboat. 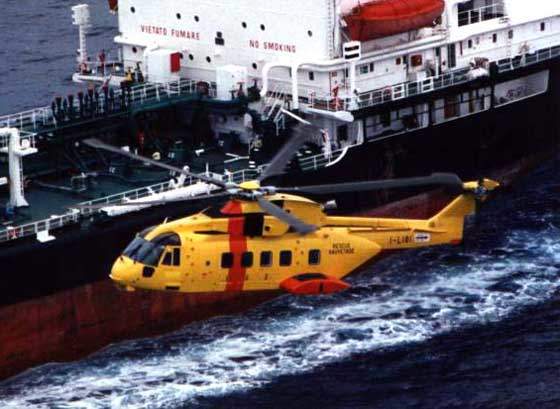 The AW101 search and rescue model. 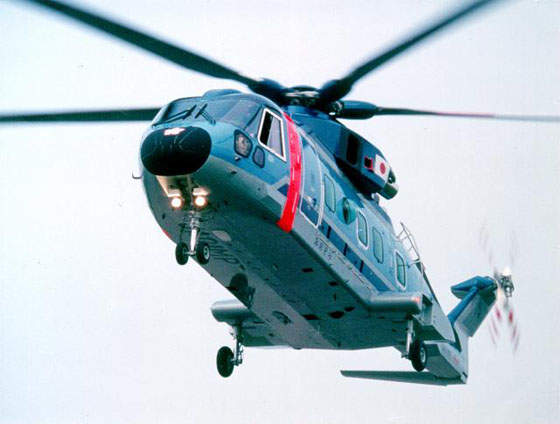 An AW101 of the Tokyo Metropolitan Police. 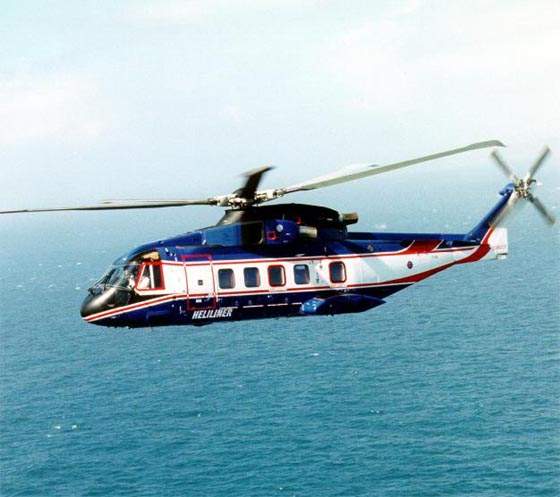 The AW101 Heliliner passenger carrying model has a capacity of 30 seats.

The AW101 medium-lift helicopter is manufactured by AgustaWestland International (formerly EH Industries), a joint venture company formed by Agusta of Italy and UK company GKN Westland. The EH101 helicopter programme has been developed for both civil and military applications.

The AW101 programme was given the go-ahead by the UK and Italian Governments with the signing of an agreement on 25 January 1984. This provided for joint funding of the project through development to the production stage. The first pre-production EH101, PP1, made its maiden flight in October 1987. The civil variant first flew in 1997.

Over 140 AW101 variants have been ordered and more than 120 delivered. The commercial utility version is in service with the Tokyo Metropolitan Police. The military version is in service with the UK Royal Air Force (as the AH101 Merlin HC3), the UK Royal Navy (HMA1 Merlin), Canadian armed forces (AH101 Cormorant for search and rescue) and the Italian Navy (in anti-submarine, airborne early warning, utility and amphibious support roles).

“The EH101 helicopter programme has been developed for both civil and military applications.”

The helicopter was proposed by Team US101, led by Lockheed Martin and was supposed to enter service in 2009. In June 2009, however, the US Navy terminated the entry of US101 into service. It decided to use its funds to upgrade the existing VH-3D and VH-60N helicopter fleets.

The AW101 Heliliner variant can carry up to 30 passengers and has been designed for commuter, VIP or offshore operations. The helicopter has an active vibration control system and low noise levels for passenger comfort.

As air ambulance, the cabin has room for a medical team and 16 stretchers. For SAR there is room to accommodate at least 20 survivors and for disaster relief as many as 55 evacuees.

“A version of the EH101 medium-lift helicopter is on offer for the US military market.”

The utility helicopter has a rear ramp and can carry rappelling kit, underslung load provision, search light, rescue hoist and stretchers. The heavy duty cabin floor and ramp are equipped with flush tie-down points, a roller conveyer for palleted freight and a cargo winch for non self-loading freight.

An underslung load hook is capable of carrying external loads up to 12,000lb, and the load measurement is displayed in the cockpit. A rescue hoist and a hover trim controller are fitted at the cargo door.

The fuselage is mainly of aluminium-lithium construction. The aerodynamic rotor blades are constructed from carbon / glass with nomex honeycomb and rohacell foam. Active vibration control of the structural response (ACSR) uses a vibration cancelling technique.

The cockpit is equipped with dual flight controls for the pilot and co-pilot but the helicopter is capable of being flown by a single pilot. The Smiths Industries electronic instrument system includes six high-definition full colour displays.

The EH101 is powered by three General Electric CT7-6 turboshaft engines, rated at 1,491kW (2,000shp). Each engine is fed from a dedicated self-sealing fuel tank using dual booster pumps and a cross feed system. The three tanks hold 3,222l of fuel. The fourth tank acts as a reservoir supply to top up the main tanks during flight.

There is capacity for an additional transfer tank to increase the helicopter’s range. A computerised fuel management system is fitted. Military variants have the capability for hover in-flight refuelling (HIFR).