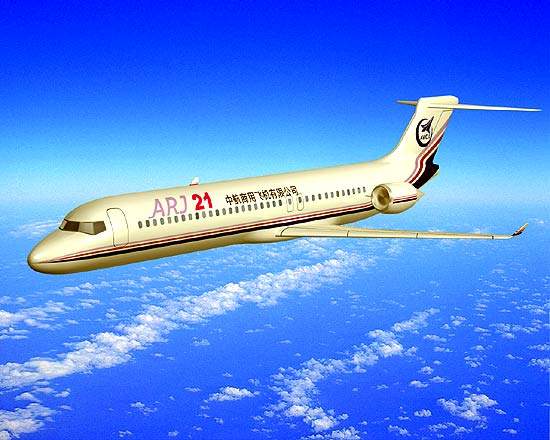 The ARJ21 regional jet is being developed in China, by the AVIC I Commercial Aircraft Company (ACAC), based in Shanghai. 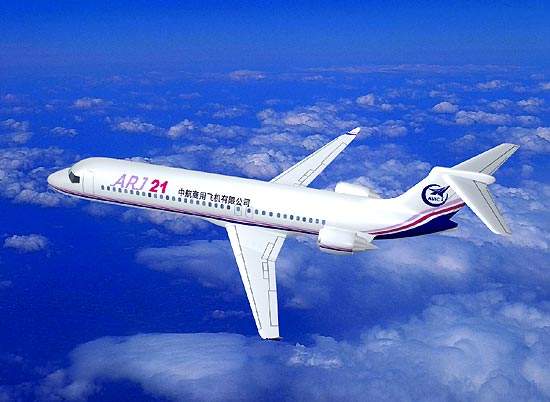 The first flight took place in November 2008 and certification by the Civil Aviation Administration of China (CAAC) is scheduled for late 2009 with entry into service in 2010. 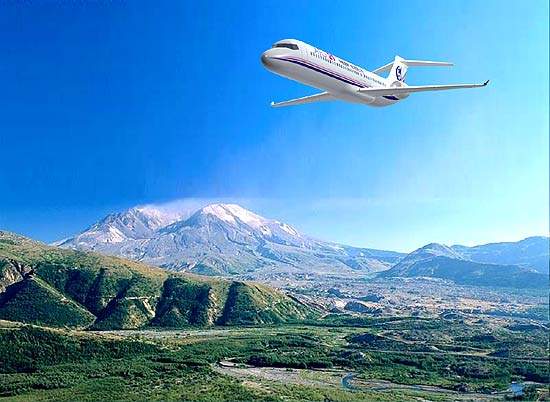 The 25° sweptback supercritical wing is fitted with winglets for improved cruise performance. The cruise speed is 0.78 mach (500ktas) and the standard aircraft has a range of 2,225km. 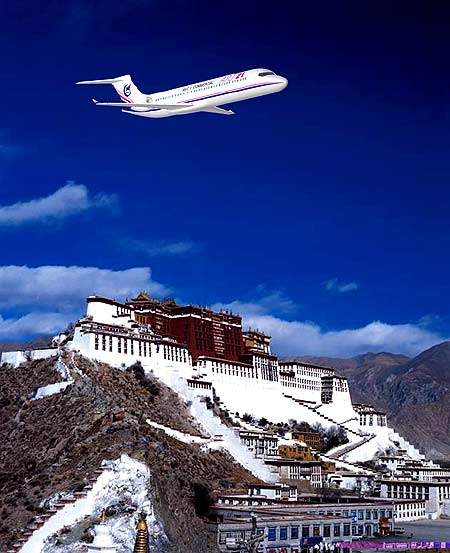 The ARJ21 performance parameters meet the diverse and demanding conditions in China, including the hot-and-high altitude conditions in Western China. 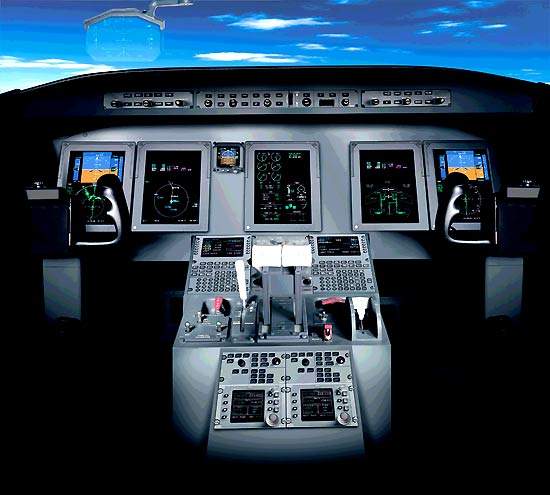 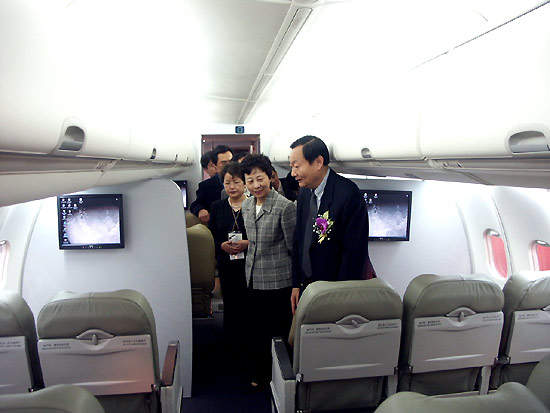 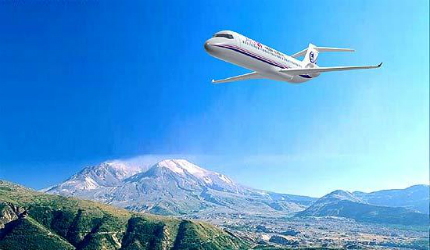 The ARJ21 regional jet is being developed by the AVIC I Commercial Aircraft Company (ACAC), based in Shanghai, which is a consortium of six companies and aerospace research institutes carrying out the development and manufacture of the aircraft.

"The ARJ21 regional jet is being developed by the AVIC I Commercial Aircraft Company (ACAC), based in Shanghai."

Final assembly began in March 2007 and the ARJ21-700 aircraft was rolled out in December 2007. The first flight took place in November 2008 at Shanghai’s Dachang Airfield. The aircraft obtained CAAC type certification in December 2012.

Certification by the Civil Aviation Administration of China (CAAC) was delayed, with entry into service planned by 2014.

The ACAC consortium, formed in 2002, includes the Shanghai Aircraft Research Institute and the Xian Aircraft Design and Research Institute, along with several aerospace companies: Chengdu Aircraft Industry Group, which is responsible for the construction of the nose, Shanghai Aircraft Company, which carries out final assembly, Shenyang Aircraft Corporation, which is manufacturing the empennage (complete tail unit) and the Xian Aircraft Company, which is responsible for manufacturing the aircraft wings and fuselage.

The ARJ21 advanced regional jet was awarded State Council approval in 2002. The first phase of the programme is directed to the development of the baseline passenger version with 70 to 80 seats.

The development will then progress to the stretched version (95 to 105 seats), standard range and extended range versions, including all passenger, freight and business jet variants.

ACAC consortium was acquired by the Commercial Aircraft Corporation of China (COMAC) in 2009.

ARJ21 underwent cold weather ground and flight testing in the utmost cold of the inner Mongolia autonomous region in January 2011. The cross wind tests of the ARJ21 700 were completed in May 2011.

MA60 is a twin-engine passenger airliner designed and manufactured by Xi’an Aircraft Industrial Corporation (XAIC) of China for short and domestic air routes.

In November 2006, Shanghai Electric Leasing (SE Leasing) signed a memorandum of understanding (MoU) for 30 aircraft, and in August 2007, Lao Airlines of Laos signed a MoU for two aircraft. In December 2007, Kunpeng Airlines ordered 50 aircraft (plus 50 options).

In June 2007, AVIC I announced an agreement with Bombardier Aerospace to co-develop the ARJ21-900 and promote long-term strategic cooperation in the 90 to 149-seat commercial aircraft market. AVIC I launched the ARJ21-900 in 2009 though service entry is delayed.

Chengdu Airlines became a launch customer by placing an order for 30 ARJ 21s in January 2010. Deliveries will begin in 2014. Merkukh Enterprises signed a memorandum of understanding for nine aircraft in May 2010.

Myanmar Airways placed an order for two aircraft in June 2011. COMAC was awarded a $30m contract by the Hebei Aviation Investment Group in November 2011 to supply ten ARJ21 jets. As of November 2011, customer orders for ARJ21 regional jets stand at 340.

The variants of the series include the baseline ARJ21 700, the extended ARJ21 900 version, the dedicated freight carrier ARJ21F and the business class aircraft ARJ21B.

The ARJ21F is a freighter variant which can carry five LD7 containers or PIP pallets. Its maximum payload capacity is 10,150kg.

The ARJ21B is a business jet model built to accommodate 20 passengers.

The flight deck is fitted with five Rockwell Collins 10in x 8in high-resolution liquid crystal adaptive flight displays. Honeywell is supplying the fly-by-wire flight control system. The avionics suite is based on the Rockwell Collins Pro Line 21 system, including a VHF-4000 voice and data transceiver and an IRU-4000 digital data and audio processor.

The integrated cockpit panel assemblies and the cockpit lighting control are supplied by Eaton Corporation.

Sagem is providing the flight deck control system which interfaces with the fly-by-wire system, including columns, pedals and a central console.

Cargo hold and engines of the Chinese ARJ21 regional jet

The cargo hold capacity is 20.415m². The aircraft is powered by two General Electric CF34-10A engines which are pod mounted at the rear of the fuselage forward of the swept T-tail.

"The ACAC consortium was acquired by the Commercial Aircraft Corporation of China (COMAC) in 2009."

The aircraft is fitted with Liebherr Aerospace twin-wheeled tricycle-type landing gear, Goodrich tyres and brakes and a Parker Hannifin hydraulic system. The take-off and landing field lengths are 1,700m and 1,550m.

The 25° sweptback supercritical wing is fitted with winglets for improved cruise performance. The cruise speed is Mach 0.78 (500kt true air speed) and cruise altitude is 10,668m. The standard aircraft has a range of 2,225km and the extended-range version has a range of 3,700km.

In March 2006, ACAC awarded a $13m contract to CAE to develop and provide the first full flight ARJ-21 simulator for ACAC flight training centre based in Shanghai.