Ukraine, Iran, Russia and so on

Maximum Weight (with out fuel) 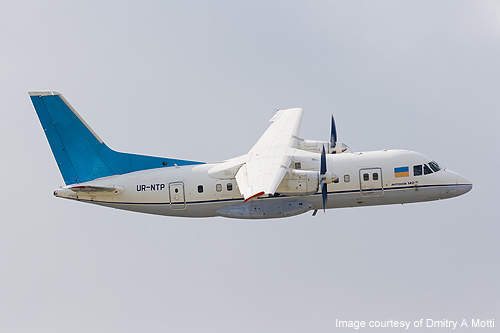 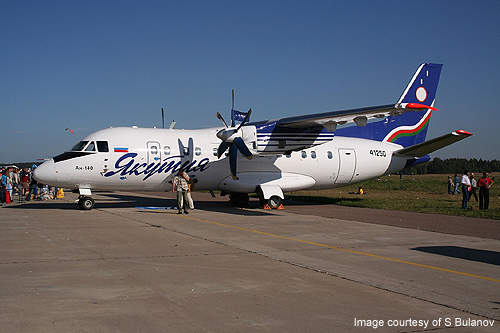 The An-140 is designed and manufactured by Antonov ASTC of Ukraine. 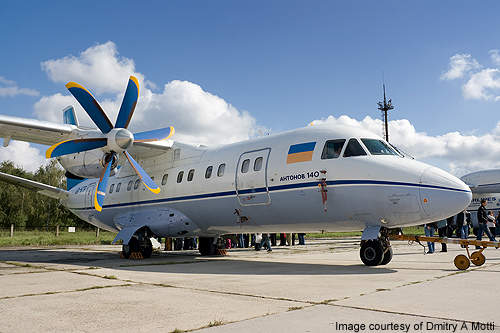 The aircraft is fitted with a freight door on the front starboard to load and unload cargo pallets. 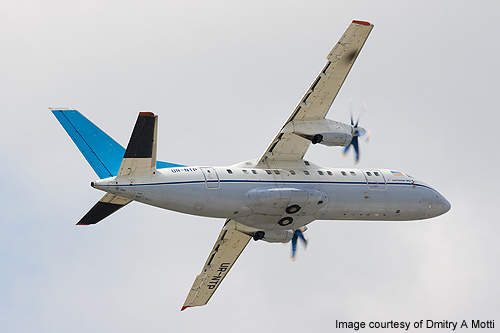 An-140 performing its maiden flight in September 1997.

The An-140 is a twin-engine passenger / cargo aircraft designed and developed by Antonov ASTC of Ukraine to operate in the regional air routes. It was built to replace the An-24 aircraft which was operational since 40 years. A total of 25 An-140s were operational worldwide as of August 2010.

The An-140-100 is a military version built in 2003 to supersede the ageing An-24, An-26 and Yak-40. This variant executes maritime patrol, medical, aerial photography, geological exploration, freight and fishery exploration missions. It features a lengthened fuselage, higher maximum take-off weight and longer range.

The An-140T is a freight model powered by TV3-117-SBM3 engine. Deployed by the Russian Navy, the variant is equipped with a large cargo door on the rear fuselage.

The An-140VIP carries 30 passengers onboard.

The Russian Air Force ordered seven An-140s from Ukraine in May 2011, reported M&C.

The An-140 is of conventional design and operates during both day and night even under worst climatic conditions. The AI9-3B auxiliary power unit integrated at the tail section of fuselage allows the aircraft to takeoff and land from semi-prepared airstrips, unpaved airfields, snow covered ice fields and short runways.

The development of An-140 began in 1993 at Kharkov State Aircraft Production Plant in Ukraine. Production was also assigned to its partner AVIACOR Aviation Plant JS (Samara, Russian Federation). HESA plant obtained manufacturing license from Antonov in 1996 to produce the license built Iran-140 Faraz at Esfahan in Iran. Production is also expected to migrate to Kazakhstan.

Three An-140 prototypes were built, of which the first came from the Kiev Factory in June 1997. The prototype took off for its maiden flight in September 1997 and entered service in October 1999. The second prototype was introduced in 1998.

The An-140 features a passenger entrance door with built-in stairs at the aft fuselage section. The aircraft is equipped with a freight door on the front starboard to load or unload the cargo. It also houses mating connector, wing navigation red light, air outlet, clamping ramp and warning horn supplied by Goodrich Corporation.

The An-140 features a large cabin with plenty of space for passengers onboard. The cabin seats 52 passengers in a four abreast seating configuration. It is divided into three zones which include exclusive lounge boasting four seats, business class fitted with 22 seats and economy class with 26 seats.

“The An-140 features a large cabin with plenty of space for passengers onboard.”

The aircraft also boasts luggage and cargo compartments of 9.1m³ volume beneath the passenger cabin and in the aft fuselage section. It can accommodate 1.84t of freight, which is 1.3 to 1.5 times larger than the capacity of a conventional aircraft of the same category. Palletised cargoes can be placed in the front portion of the passenger cabin.

The An-140 is powered by two TV3-117VMA-SBM1 turboprop engines driven by two six-bladed AV-140 composite propellers. Each engine can generate 1,838kW of output power. The engines are manufactured by Ivchenko Progress Zaporozhye, Klimov Scientific Industrial Enterprise and Motor Sich.

The aircraft can operate at ambient temperatures ranging between -550C and + 450C from airfields located 2,500m above the sea level.