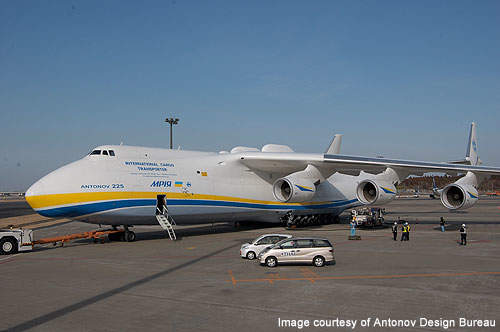 An-225 is designed and built by Antonov Design Bureau. 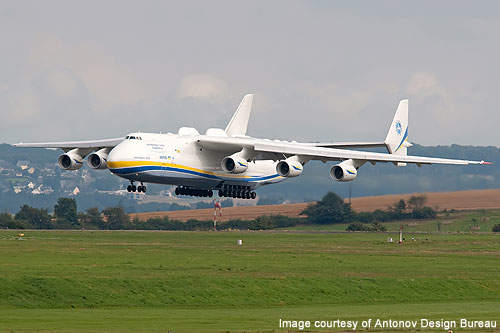 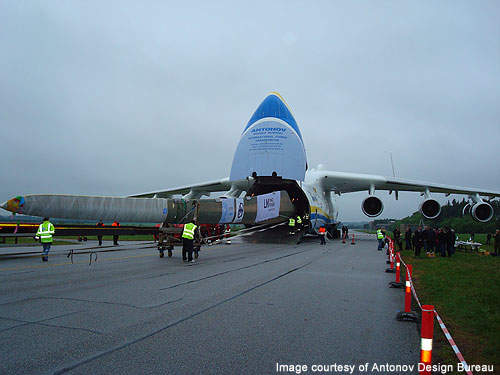 The cargo door is fitted with ramp for quick loading and unloading of cargo. 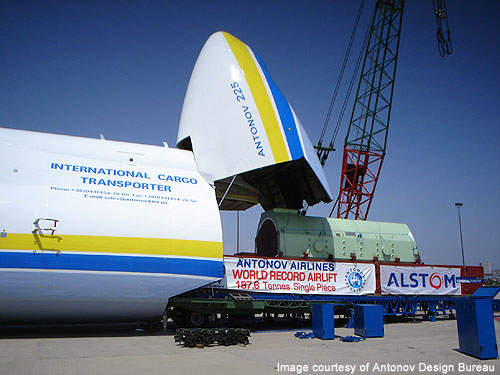 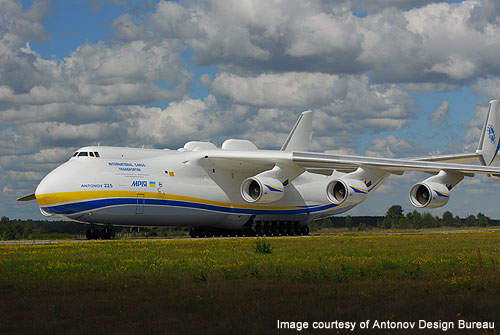 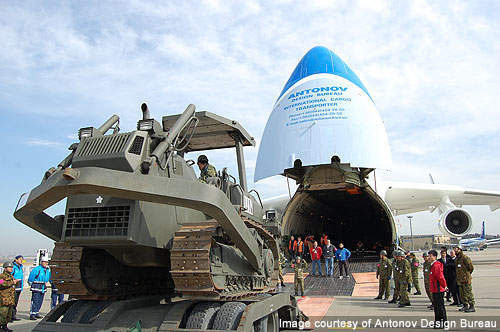 The aircraft can carry 640t of cargo on its freight compartment.

The Antonov An-225 Mriya is a six engine, strategic heavy lift cargo transport aircraft designed and manufactured by the Antonov Design Bureau (ADB) of Ukraine. The term Mriya refers to the word dream or inspiration in English. Its NATO reporting name is Cossack.

The aircraft was derived from the An-124 Ruslan (NATO: Condor). Cossack is the heaviest fixed wing aircraft in the world to carry 640t of cargo. It is bigger than an  Airbus 380 airliner, the An-124 and the Boeing 747 Freighter.

An-224 is the original designation of An-225. This variant features an additional rear cargo door.

An-225-100 is an improved version of the An-225. This variant is upgraded with better communication gear, navigation equipment and a traffic collision avoidance system (TCAS) for use in commercial operations.

An-325 is an extended variant of An-225. It is fitted with an additional engine on each in-board pylon, which increases the payload carrying capacity.

The An-225 is designed to execute both military and civil operations even in the worst weather conditions. It is designed principally to carry Energia rocket’s boosters and the Buran space shuttle from its service area to the launch site as part of the Buran Space Shuttle Program.

Oversized payload can be carried in its spacious cargo deck as well as on an externally fixed mount.

ADB developed two An-225 Mriya prototypes. The development of the first prototype began in early 1984 and its maiden flight took place in December 1988. It entered into service in 1989.

The modifications included the lengthening of fuselage and wingspan, addition of two engines, redesign of the tail with twin vertical fins, increase in the number of landing gear tires to 32 and the removal of the rear cargo doors. The aircraft initially had a maximum gross weight of 600t which was increased to 640t by the additional floor area under a $20m upgrade program.

The development of the second prototype began in the late 1980s with the aim of achieving more effective cargo transport aircraft. The prototype was upgraded with a rear cargo door and a redesigned tail fitted with a vertical stabiliser. Its development was, however, debarred in 1993 due to lack of funds and collapse of the Soviet Union in 1991.

Following the cancellation of the Buran Space Shuttle Program, ADB placed the An-225 in storage during 1994-2000. The increase in demand for heavy freight transport aircraft resulted in resuming the development of second prototype in September 2006. The development was again deserted in August 2009, however.

The Cossack features an airborne cargo handling system and a cargo door fitted with a ramp to carry out loading or unloading missions quickly and easily. It also features a fuselage barrel extension on the front and rear of the wings to increase the span. The load securing system attaches uniquely size cargoes to the upper fuselage section.

The aircraft features an IFR compatible, all digital flight deck, which can accommodate six crew including a pilot, co-pilot, navigator, radio operator and two flight engineers. The flight deck is incorporated with automated navigation and flight control systems for quick analysing and servicing.

The An-225 Mriya is powered by six Ivchenko Progress Lotarev D-18T, three shaft turbofan engines, each of which can produce a maximum thrust of 229.5kN.

It is fitted with a bucket-shape thrust reverser, a jetpipe, a drive box, an exhaust nozzle, a fan turbine, a combustion chamber,an  intermediate drive, a fan stator blade and fan wheel.

The aircraft is fitted with a 32-wheel landing gear system. The nose landing gear features four wheels in the front fuselage section. The rear fuselage constitutes 16 dirigible wheels out of 28 tires fitted to the main landing gear. The aircraft can take full turn on a 60m wide runway.