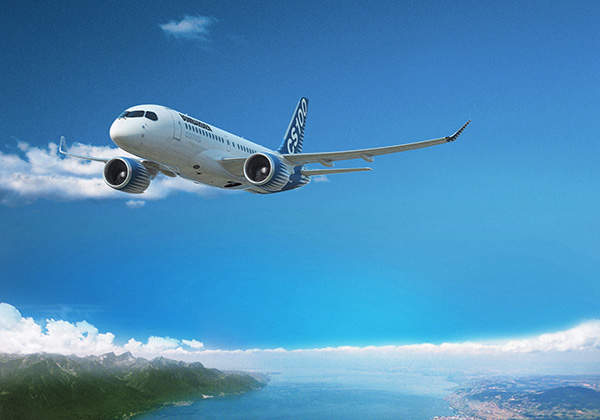 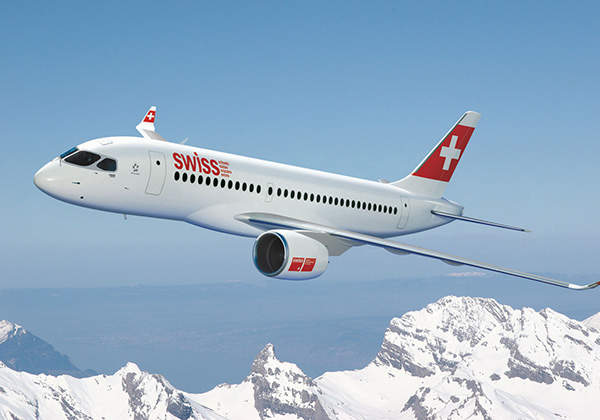 An artist's impression of the CS100 in the colour scheme of Swiss International Air Lines. 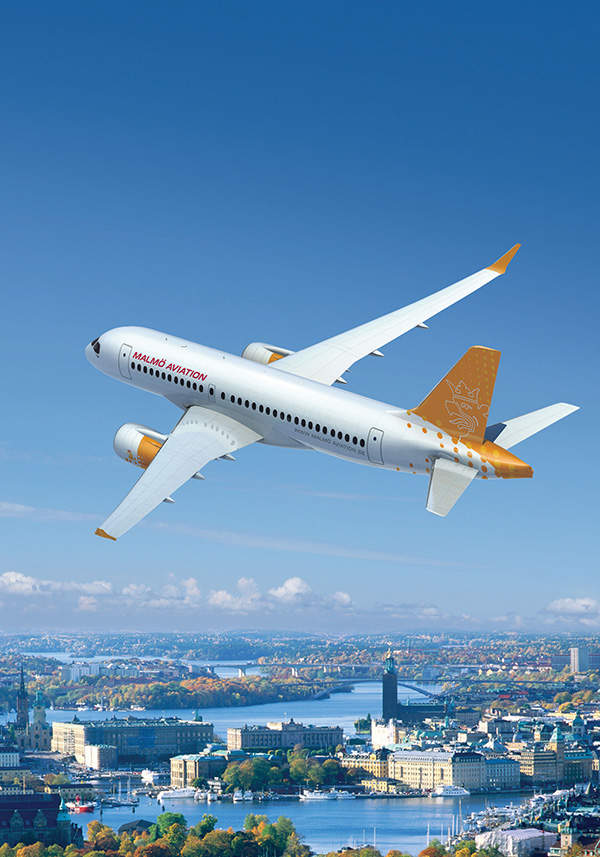 A generated image of the Malmö Aviation CS100 aircraft. 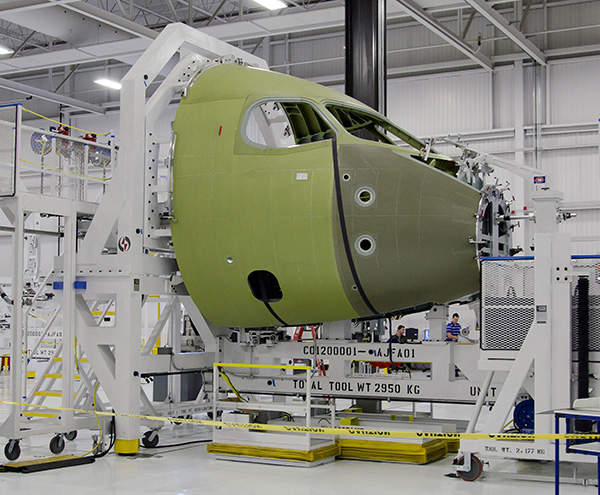 The Airbus A220-100 (previously Bombardier CS100) jetliner is a single-aisle, long-range passenger aircraft developed by Bombardier Aerospace. The CS100 can accommodate 100 to 125 passengers based on the seating configuration.

Bombardier Aerospace launched the CSeries aircraft programme in July 2008. The CSeries includes two models: CS100 jetliner with options of 100 to 125 seats, and the CS300 jetliner with 130 to 145 seat layouts.Systems integration began at the Complete Integrated Aircraft Systems Test Area (CIASTA) in April 2012. The first flight was completed at Montréal -Mirabel Airport in Québec in September 2013.

The aircraft obtained a type certificate from Transport Canada in December 2015. The aircraft secured type validation by European Aviation Safety Agency (EASA) and the Federal Aviation Administration (FAA) in June 2016. The first aircraft was delivered in July 2016.

Bombardier orders and deliveries of A220-100

In March 2009, Deutsche Lufthansa signed a firm purchase agreement with Bombardier for 30 A220-100  aircraft for its subsidiary Swiss International Air Lines. SWISS converted ten of its 30 firm-ordered A220-100 aircraft to A220-300 aircraft in June 2015. SWISS received the sixth aircraft in March 2017.

Braathens Aviation placed a firm order for five A220-100s in June 2011. An unidentified European customer placed a $628m firm order for ten A220-100 aircraft in the same month of that year.

In January 2012, PrivatAir placed a firm order with Bombardier for five A220-100 aircraft. The contract also includes options for an additional five aircraft.

Delta Air Lines placed a$5.6bn contract with Bombardier for 75 A220-100 aircraft in April 2016. The order also includes options for an additional 50 aircraft. The operator received the first aircraft in October 2018

The CS100 aircraft incorporates a clean-sheet design. The airframe is made of advanced structural materials for achieving weight savings. The fuselage is made from aluminium. Advanced composite materials have been used for the empennage, rear fuselage, nacelle and wings.

“The aircraft features wider aisle for quick boarding and de-boarding of passengers.”

The flight deck can be equipped with an optional dual electronic flight bag, single or dual head-up display (HUD), and Cat IIIb autoland capability. The line-replaceable modules (LRB) are housed in two physically separated cabinets to ease the maintenance and optimise weight.

The CS100 aircraft features a five-abreast cabin delivering more seat width for every passenger. The extra large windows offer better view angles. The cabin offers highest overhead bin volume per passenger compared with that of the currently in-service narrow-body aircraft. The aircraft features a wider aisle for quick boarding and de-boarding of passengers.

The CS100 offers a variety of seating options to meet the requirements of the airlines. The interior can be configured for single-class seating (110 seats), mixed-class (100 seats), and high-density class (125 seats) seating.

Bombardier Global 6000 is the most luxurious business jet built by Bombardier Aerospace.

The CS100 jetliner is powered by two Pratt and Whitney PurePower PW1500G engines. Each engine can generate a maximum thrust of 93.4kN. It uses a fan-drive gear system, and advanced combustion technology for delivering high performance. The engine is monitored by an engine health display system.

The CS100 aircraft is fitted with PW1500G, which offers a 15% lower operating cost and 20% fuel burn advantage over similar aircraft.

The fuselage is supplied by Shenyang Aircraft, and winglets are delivered by GKN Aerospace. The actuation systems and low-pressure distribution systems are provided respectively by Goodrich and Senior Aerospace. Alenia Aeronautica delivers electric and flight control systems, lights and antennas, while Fokker Elmo is responsible for the wiring and interconnection system.