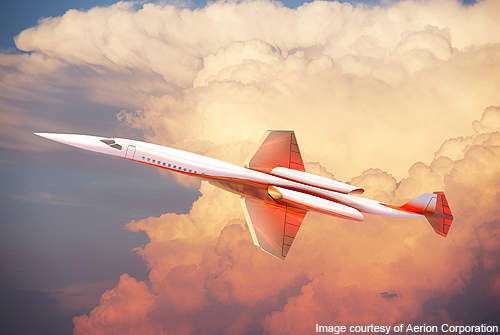 The Aerion SBJ will reduce the journey time between NewYork and Paris to 4.25 hours. 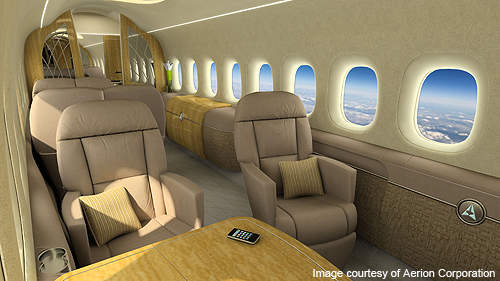 The Aerion SBJ cabin is fitted with 12 seats. 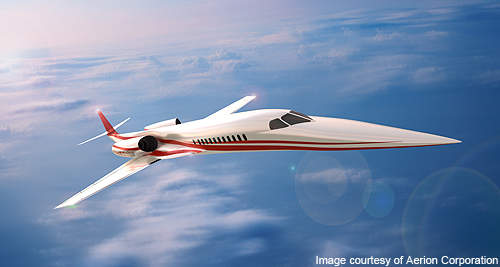 A rendering of Aerion SBJ.

Aerion SBJ is a supersonic business jet designed and manufactured by Aerion Corporation. A superfast executive plane, the SBJ can fly continuously from Europe to North America and vice versa within a day. Each SBJ will cost approximately $80m. The development cost of the Aerion SBJ will vary between $1.2bn and $1.4bn.

The maiden flight of the aircraft took place at the Edwards Air Force Base, California in 2010. The aircraft achieved a top speed of Mach 2 during the aerodynamic flight testing and reported positive results in October 2010. The aircraft is expected to enter into service in 2014.

Sheik Rashid Bin Humaid Al Noaimi was the first potential customer to provide a $250,000 deposit for the supersonic business jet. The company is expecting orders for about 8,300 business jets by 2014.

“The Aerion SBJ has been designed to adhere to the existing sonic boom regulations.”

The Aerion SBJ has been designed to adhere to the existing sonic boom regulations. It has a low sonic boom with an initial pressure of 0.8psf which can be reduced to 0.5psf by making small modifications to the design. The wings and tail have been shaped similar to those of the F-104 Starfighter.

The wings of SBJ are built using supersonic natural laminar flow (SNLF) technology, which decreases the total airframe drag by 20% compared to delta wing technology adopted in the F-104.

The Aerion SBJ will reduce the journey time between New York and Paris to 4.25 hours saving three hours off the trip. It will also decrease the journey time from New York to Tokyo to 9.5 hours including a one hour stop off for refuelling.

The construction of the first prototype of the Aerion SBJ began in 2004. The project will include five SBJ prototypes (two for testing on ground and three in air). A Texas billionaire has financed the project.

The jet is being constructed using a range of conventional materials and modern technologies to reduce programme risk. The delta wings are being made up of carbon epoxy material to accomplish structural rigidity and low weight.

The aircraft body is coated with titanium for erosion resistance. The fuselage section, empennage and nacelle are of aluminium and composite materials.

The Aerion SBJ has a spacious flight deck with two seats for pilot and co-pilot. The automatic fly-by-wire control system offers higher flexibility. The system is being designed to meet advanced safety regulations and modern standards.

The cabin provides plenty of luxury space for passengers. The cabin can accommodate 12 passengers on-board.

It has a restroom, kitchen, a four-seat sofa, a flat bed and a shower. The passengers can transmit or receive emails, use telephones and conduct meetings or conferences. The internal cabin is 1.88m high.

“The Aerion SBJ has a spacious flight deck with two seats for pilot and co-pilot.”

Each engine can produce a maximum of 87.19kN of thrust. The aircraft meets the International Civil Aviation Organization (ICAO) standards in Stage 4 or Chapter 4 noise regulations. The engine is fitted with an E-kit which reduces 25% of NO2 emissions, unburned hydrocarbons (99%) and 25% of smoke.

The fan tip diameter of the engine varies between 1m and 1.24m. The length of the engine ranges between 3m and 3.91m. The initial time between overhaul (TBO) is expected to be 3,000 hours.