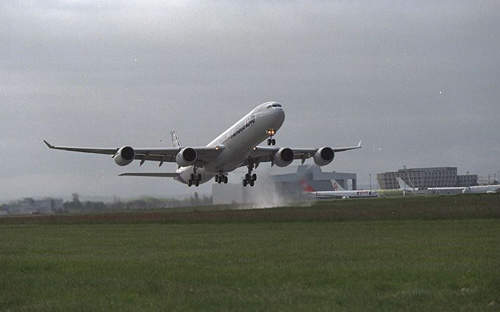 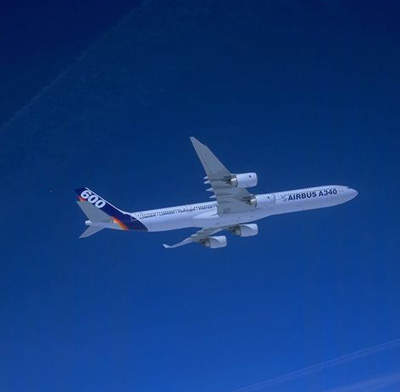 First flight of the A340-600, the largest of the Airbus jetliners. 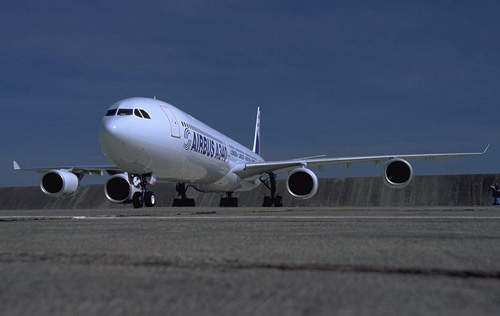 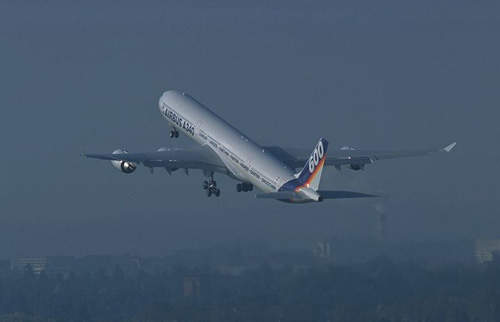 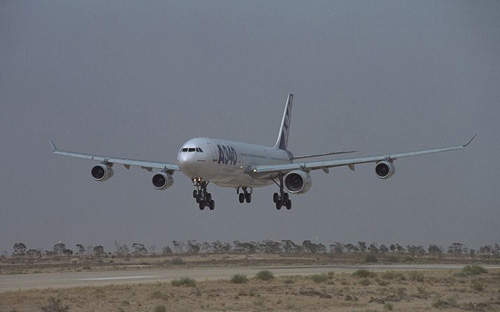 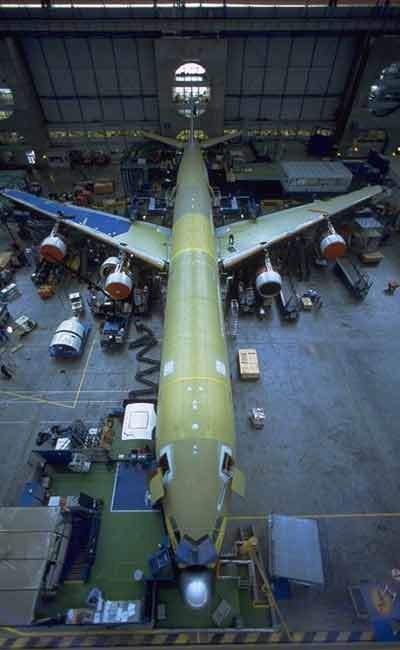 The aircraft in the assembly building. 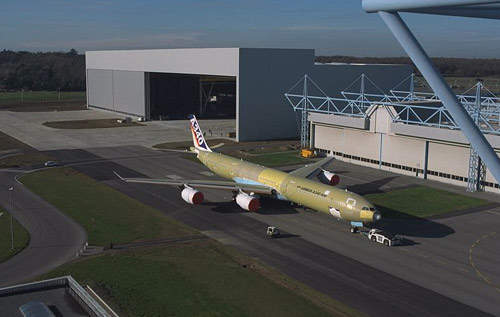 The advantages of the aircraft's four engines include a reduction in maintenance costs, less thrust is required for take-off with no second segment climb limitation.

The Airbus A340-600 is the largest of the Airbus jetliners and is a super-stretched version of the A340 family of aircraft. One of the largest commercial aircraft in the world, the A340-600 provides a passenger capacity of 380 and a range of 13,900km.

The A340-600 inaugural flight took place on 23 April 2001 and the aircraft was awarded type certification in June 2002. The aircraft entered service with Virgin Atlantic Airways (launch customer with 20 aircraft on order) in August 2002 when it took its first commercial flight from London Heathrow to JFK New York.

In December 2006, Airbus delivered the first VIP version of the A340-600 to SAAD Air of Saudi Arabia. The VIP version seats about 80 passengers.

The ultra-long-range A340-500, which made its first flight in February 2002, is 6.5m shorter and is capable of carrying 313 passengers with a range of 15,750km. The aircraft received European certification in December 2002 and entered service with launch customer Emirates in November 2003.

A new variant of the A340-600 made a maiden flight in November 2005. It is equipped with upgraded Rolls-Royce Trent 500 engines and uses construction techniques developed for the A380 such as laser beam welding. Its range is extended to 14,600km. The upgraded aircraft was certified by EASA (European Aviation and Safety Agency) in April 2006 and delivered to launch customer. Qatar Airways shortly after.

In February 2008, an A340-600 was successfully tested with a new electric braking system developed by Messier-Bugatti with Airbus. The test included landings with automatic braking and rejected take-offs.

The flight deck on the A340-600 is almost identical to that of the basic A340 and there is very little difference between the operating procedures of the two aircraft. As a consequence any pilot qualified to fly the A340 will need only one or two days briefing to be flight rated for the A340-600. The Airbus Cross Crew Qualification (CCQ) program, enabling pilots to transit from one Airbus fly-by-wire family to another through difference training, reduces training time by 65% to 95% and significantly lowers training costs.

The multi-purpose control and display unit of the new flight management system developed by Thales and Smiths Industries has six 6.25in x 6.25in liquid crystal displays.

The fly-by-wire controls of the A340-600 result in reduced turbulence and improved flying comfort. A high degree of redundancy and integrity is incorporated into the electronic flight control system, which includes five main computers and segregated power supplies and signalling lines. A Rockwell Collins Integrated Information System provides high-speed data communication links.

A two bunk rest area for the crew can be provided just aft of the flight deck. The rest area has a wardrobe, folding meal table communication and entertainment equipment. The upper bunk can be lowered to allow landing and take-off seats for two crew.

Thales Avionics developed a digital head-up display which is planned for certification on the A340 in 2006. The HUD has a 35° x 26° field of view and uses liquid crystal displays.

The A340-600 has 20 more frames (structural members) than the A340-300 making it 10.6m longer. Advanced composites were used for the empennage (complete tail unit) structure, all empennage and wing trailing edges, all fairings and floor panels. Superplastic foaming and diffusion bonding have been used on the inspection hatches, the tail cone cap, the slat mechanism cams and parts of the canopy.

A typical three-class layout in the A340-600 accommodates 380 passengers with 12 first-class, 54 business-class and 314 economy-class seats. A two-class layout provides 419 seats. The cabin can be reconfigured very quickly for changes in fleet deployment. There are six temperature sensor location zones along the cabin to provide comfortable conditions for the passengers. The modular in-flight entertainment system provides the passenger with a single interface unit for telephone and fax, for credit card facilities and for interactive video and games.

The new wing design, with wing area 439.4m², accommodates larger fuel tanks and provides increased lift. The wing is 20% larger in wing area than that of the A340-300. The enlarged wing allows the aircraft to cruise economically at speeds in excess of Mach 0.83.

The lower decks can be allocated to provide additional crew or passenger facilities such as crew rest areas, bunks and sleeper cabins.

The four-engine configuration means that the aircraft is free from the constraints of ETOPS, the rules that govern the operation of twin-engine aircraft on very long flights. Long-Range Operations (LROPS) rules, that will replace ETOPS, allow the A340-600 aircraft to overfly extreme regions such as the poles or the Himalayas. In an exceptional event of an engine failure, the aircraft can continue to fly safely over these extreme regions to the final destination without diversion.

The Rolls-Royce Trent 556 engines, yielding 53,000lb to 56,000lb thrust, give fuel efficiency with low emissions. Advantages of quad-engine performance include a reduction in maintenance costs by about 15% because four small engines are cheaper to maintain than two large engines, less thrust requirement for take-off, improved performance from hot and high airports and no second segment climb limitation.