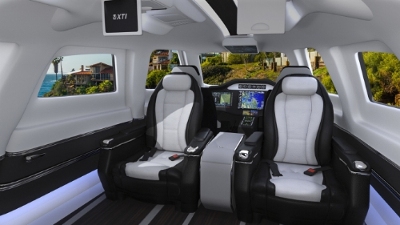 Equity crowdfunders worldwide contributed their shares to support the development of TriFan 600.

The TriFan 600 can take off and land like a helicopter, while operating at the same speed, range, and comfort of a business jet.

TriFan 600 is a six-seater vertical takeoff and landing airplane, which aims to provide door-to-door transportation rather than airport-to-airport.

"We will file with the SEC in the next few months and, once approved, will allow participants to turn expressions of interest into share purchases."

Since last August, XTI has been assessing public interest under the terms of Regulation A, or Reg A+ of the JOBS Act.

In addition, the company is raising funds through venture capital, private equity and accredited investors to help finalising its technical solution. It is also in discussions with vendors to finalise the prototype design.

"The public response has been tremendous so far."

XTI has been backed by its present chairman David Brody and receives support from other industry veterans, including Pino, former president and chief executive of Sikorsky Aircraft, Charlie Johnson, and the former president of Cessna Aircraft.

The company expects to achieve 40 to 100 TriFan sales per year, setting a new standard for private business jets, fulfilling a demand for fast, runway-free transportation.

Before delivering the TriFan, XTI will initiate a pre-sales programme, where buyers will be able to make a refundable deposit, reserve their place in line, and retain that priority position into production.

A TriFan 600 will cost between $10m and $12m. XTI hopes generate gross revenue of more than $1bn from approximately 100 orders.

Image: The TriFan 600 is being developed by XTI Aircraft as the world’s first commercially certified vertical takeoff airplane. Photo courtsey of PR Newswire