X
Advertise with us
Mrinmoyee 21 February 2016 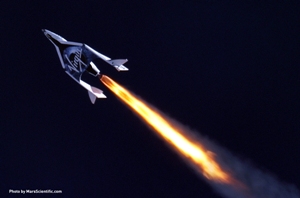 The spaceship could take tourists and researchers into space.

The new vehicle, called Virgin Spaceship (VSS) Unity, is designed to carry a crew of two pilots and a maximum of six passengers to space.

Manufacturing of VSS Unity started in 2012 and each component underwent rigorous testing before assembly.

As VSS Unity has been manufactured and unveiled, The Spaceship Company will undertake integrated systems verification, followed by ground and flight tests in Mojave and ground and air exercises at Spaceport America, New Mexico.

"Together, we can make space accessible in a way that has only been dreamt of before now, and by doing so can bring positive change to life on Earth."

VSS Unity is the first vehicle to be built by The Spaceship Company, which already started work on its next SpaceShipTwo.

Virgin Group founder Sir Richard Branson said, "Together, we can make space accessible in a way that has only been dreamt of before now, and by doing so can bring positive change to life on Earth.

"Our beautiful new spaceship, VSS Unity, is the embodiment of that goal and will provide us with an unprecedented body of experience, which will in turn lay the foundations for Virgin Galactic’s future."

Developed on the basis of the SpaceShipOne design, VSS Unity has the ability to reach altitudes of 100km above Earth and offers a few minutes of out-of-seat weightlessness and a view of the planet from the space.

Approximately 700 people registered themselves for the space rides that cost $250,000 each, reports Reuters.

Virgin Galactic CEO George Whitesides said: "We seek to open space to people from all walks of life, and today’s milestone is a big step toward that goal."