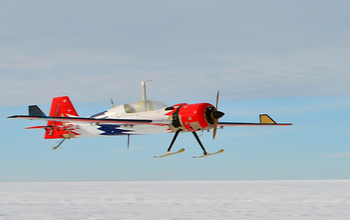 Scientists at the Center for Remote Sensing of Ice Sheets (CReSIS) at the University of Kansas have tested a compact radar system fitted on a small unmanned aircraft system (UAS) to study behaviour of polar ice sheets.

The testing is intended to address the need for quicker and less expensive ways to measure and eventually predict behaviour of the polar ice sheets, which hold a vast amount of Earth’s freshwater.

The new airborne tool has been designed to allow radar measurements and map the topography underlying rapidly moving glaciers that would have been expensive or difficult to carry out with a manned aircraft.

The UAS was tested at a field camp in west Antarctica with support from the National Science Foundation’s Division of Polar Programs and the State of Kansas.

CReSIS aerospace engineering associate professor and associate director of technology Rick Hale said: "The results of this effort are significant, in that the miniaturised radar integrated into a UAS promises to make this technology more broadly accessible to the research community."

The portable UAS has a takeoff weight of about 38.5kg and a range of approximately 100km, while the compact radar system weighs just 2kg with the antenna integrated into the wing of the aircraft.

"The results of this effort are significant, in that the miniaturised radar integrated into a UAS promises to make this technology more broadly accessible to the research community."

It can be used to collect data over flight tracks around 5m apart, resulting in thorough coverage of a given area. The measurements were the first successful sounding of glacial ice with a UAS-based radar.

Researchers will now analyse the data collected during this field season, further reducing the size of the radar and decreasing its weight to 1.5kg or less, and increasing the UAS radar transmitting power.

Additional test flights will be conducted in Kansas in the coming days in order to further evaluate the avionics and flight-control systems, as well as optimise the radar and transmitting systems.

In 2014 or 2015, the UAS will be deployed to Greenland to collect data over areas with extremely rough surfaces and fast-flowing glaciers, such as Jakobshavn, one of the fastest flowing glaciers in the world.

Image: The UAS lands in Antarctica. Photo: courtesy of University of Kansas.