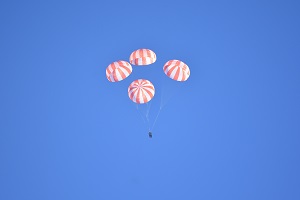 Space Exploration Technologies (SpaceX) has tested the system that will be used in its spacecraft Crew Dragon to transport astronauts to and from the International Space Station (ISS).

During the test, four parachutes unfurled above the desert near Coolidge, Arizona, and landed carrying a mass simulator, which represented the weight of a spacecraft.

Equipment was carried thousands of feet above the ground in a C-130 cargo aircraft and released.

SpaceX is developing Crew Dragon as part of Nasa’s Commercial Crew Transportation Capability (CCtCap) programme, which envisages the use of commercial services for human transportation to the ISS.

SpaceX plans to launch Crew Dragon on its Falcon 9 launch vehicle, while Boeing is developing CST-100 Starliner to be launched on ULA’s Atlas V.

"Equipment was carried thousands of feet above the ground in a C-130 cargo aircraft and released."

The US expects to cut costs on transportation missions by involving private companies. Each seat on Crew Dragon or CST-100 is estimated to cost $58m compared to $81m on Russia’s Soyuz.

The two human space transportation systems are expected to be developed for less than $5bn, with $1.2bn estimated to be required in 2016.

SpaceX and Boeing will be guaranteed an order of two missions with a maximum of six missions, and a maximum potential value of $2.6bn and $4.2bn, respectively.

Recent tests evaluated the four main parachutes, while drogue chutes, needed for a full landing system, will be tested in later stages.

Initial ISS missions will have parachutes landing on water, but subsequently the vehicle will land on the ground with support from eight SuperDraco engines.

SuperDraco thrusters will slow the vehicle’s return to Earth through the atmosphere and set the spacecraft and its crew down gently.