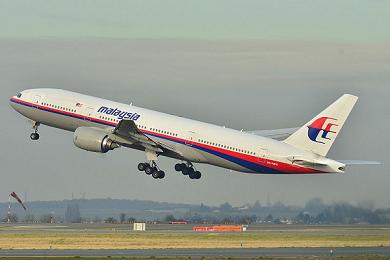 US and the Ukranian authorities are saying that the Boeing 777, which was on its way to Kuala Lumpur from Amsterdam, was hit by a ground-to-air missile.

The Ukranian Government and the pro-Russia rebels in the country have blamed each other for shooting the plane with a missile.

According to Ukraine, the aircraft was brought down by rebel forces, who were also responsible for shooting down two cargo planes earlier this week.

"If it transpires that the plane was indeed shot down, we insist that the perpetrators must swiftly be brought to justice."

"While we do not yet have all the facts, we do know that this incident occurred in the context of a crisis in Ukraine that is fuelled by Russian support for the separatists."

A statement issued by the US White House read: "While we do not yet have all the facts, we do know that this incident occurred in the context of a crisis in Ukraine that is fuelled by Russian support for the separatists, including through arms, materiel, and training.

"This incident only highlights the urgency with which we continue to urge Russia to immediately take concrete steps to de-escalate the situation in Ukraine and to support a sustainable cease-fire and path toward peace that the Ukrainian government has consistently put forward."

Russian President Vladimir Putin said: "The country in whose airspace this happened bears responsibility for it."

Meanwhile, the separatists have agreed to provide an international team access to the crash site to undertake investigation.

Boeing said it will provide the required assistance to the investigating authorities.

According to news agency Interfax, the black box has been recovered by the separatists and sent to Russia.

The Malaysian Airlines lost two planes in four months this year. The MH370 disappeared in March and has still not been found.