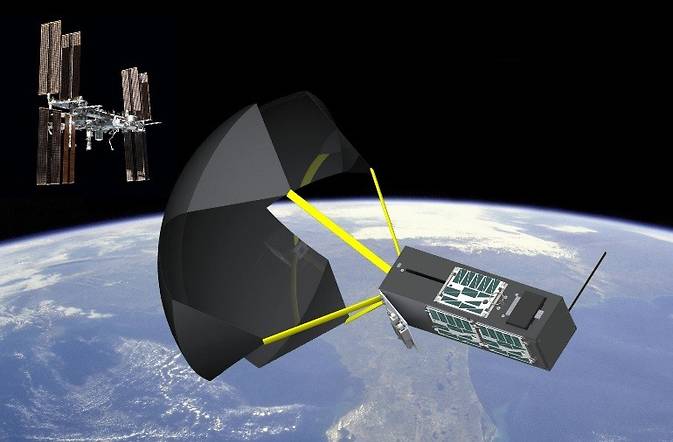 TechEdSat-4, a small satellite launched from the International Space Station (ISS) by Nasa has successfully entered its orbit, paving way to test technology that could allow returning satellites from their orbit to Earth’s atmosphere.

Approximately 30 minutes after the launch by Nanoracks CubeSat Deployer, the free-flying TechEdSat-4 deployed its parachute-like exo-brake, which is designed to operate as an aerodynamic drag device.

TechEdSat-4 satellite will perform a series of manoeuvres in the next few weeks, which will cause the satellite to de-orbit and re-enter the Earth’s atmosphere.

The spacecraft is said to have demonstrated satellite-to-satellite communications technologies such as providing accurate information about the spacecraft health and position.

Nasa Ames Research Center TechEdSat-4 principal investigator Marcus Murbach said: "The exo-brake is a self-stabilising exospheric de-orbiting mechanism that will allow us to return a payload to earth fairly rapidly from an orbital platform, like the International Space Station.

"We were able to send commands and receive data to and from the satellite via the onboard modem using only a laptop and email account."

"The technology could enable safe return of scientific samples and cargo from orbital platforms at a lower cost, as well as facilitate future small or nanosatellite missions to Mars and other planetary bodies."

The technology could enable safe return of scientific samples and cargo from orbital platforms at a lower cost, as well as facilitate future small or nanosatellite missions to Mars and other planetary bodies.

Launched aboard Orbital ATK’s Cygnus spacecraft in July 2014, the TechEdSat-4 is equipped with a data satellite modem and a GPS receiver for communication functions.

Mr Murbach said: "We’ve already developed a sample canister that during atmospheric re-entry could slip out the back of the satellite and safely be recovered on Earth.

"This could also be adapted to future Mars satellites as a piggy-back or ride-along payload that could jettison independently and study the mid-latitude or other scientifically interesting regions of Mars."

In 2012, a Japanese small satellite orbital deployer released TechEdSat-1, which included the basic communications subsystem and radiation-tolerant controller. TechEdSat-2 was used in a satellite communication system flight test in April 2013.

The TechEdSat-3 was the first exo-brake and the first nanosatellite to deploy from the ISS.

Nasa’s Ames Research Centre is working on the TechEdSat-5 satellite, which is scheduled for launch this year.

Built on the TechEdSat-4 design, the TechEdSat-5 will introduce a modulating exo-brake, which will allow the satellite to precisely enter the atmosphere.