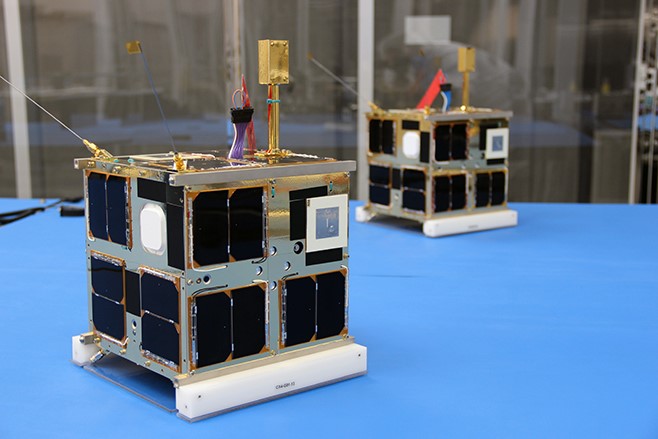 A pair of nanosatellites has completed the world’s first demonstration of autonomous spacecraft-to-spacecraft orbit manoeuvring.

CanX-4 and CanX-5 are a pair of identical nanosatellites with the primary mission to demonstrate on-orbit formation flying.

Formation flying involves two or more satellites controlling their position and orientation with respect to one another to achieve a predefined configuration necessary for co-ordinated operations.

"This experiment was a key demonstration of a critical capability for multi-spacecraft asteroid missions, as well as constellations of spacecraft in Earth orbit."

The orbit change was done using an onboard propulsion system over a shared S-band inter-satellite link (ISL) radio.

DSI intends to use a small spacecraft for initial asteroid prospecting missions in the next five years.

DSI chief engineer Grant Bonin said: "This experiment was a key demonstration of a critical capability for multi-spacecraft asteroid missions, as well as constellations of spacecraft in Earth orbit.

"It was also a first step in demonstrating ship-to-shore command relay in space, which could potentially reduce the difficulty of communicating with very small spacecraft at long range.

"The ability to relay commands from spacecraft to spacecraft, and perform in-space maneuvers autonomously, without operator intervention, is a critical capability that has major implications for mission-level redundancy, not just for asteroid missions, but also for low-cost Earth orbit constellations.

"This also shows that, if necessary, we can take the operator entirely out of the loop during a mission, which can translate into significant savings."

DSI and SFL plan to work together to offer low-cost space technologies and missions to market, and enable low-cost asteroid missions.