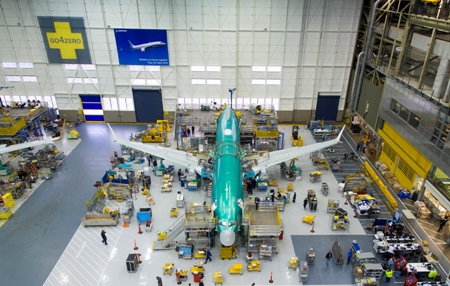 Boeing has started final assembly of the first 737 MAX 8, the initial member of its single-aisle family, at its Renton, Washington plant in the US.

Technicians have started installation of flight systems and insulation blankets, and then mechanics moved the fuselage to the wing-to-body join position on the production line, and later attached the wings to the aircraft body.

Boeing Commercial Airplanes 737 MAX programme vice-president and general manager Keith Leverkuhn said: "We continue to meet our plan on the 737 MAX programme thanks to the dedication of our employee team and our suppliers.

"We have a lot more work still ahead of us but we’re very pleased with our progress to date."

"Seeing the new winglet design we validated in the wind tunnel years ago now on the first new aircraft is incredible."

The 737 MAX will be initially built on one production line at Renton factory, and later extended to the other two final assembly lines.

The 737 MAX wings feature Boeing’s advanced technology winglets, which are claimed to deliver up to 1.8% in fuel-efficiency over the existing winglet designs.

Leverkuhn said: "Seeing the new winglet design we validated in the wind tunnel years ago now on the first new aircraft is incredible.

"It’s just one of the features that differentiate the 737 MAX and make it an amazingly fuel-efficient machine."