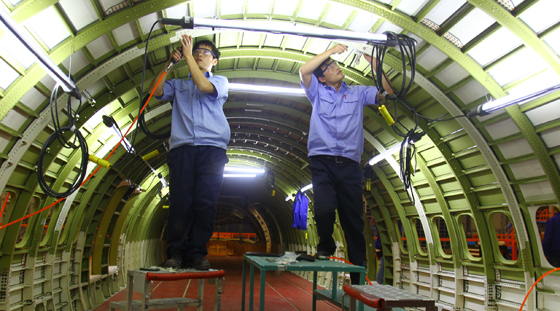 The company completed basic assembly of the aircraft, and plans to roll out the C919 off assembly lines later this year, reported Xinhua.

The Shanghai-based aircraft manufacturer received C919 vertical fin and the back end of rear fuselage from local producers.

"Powered by two CFM International LEAP 1C engines, the C919 is believed to compete with Boeing 737 and Airbus A320."

The C919 aircraft is part of COMAC’s efforts to break the duopoly of aviation companies Airbus and Boeing in the segment.

The programme was hit by a series of delays due to lack of technical expertise with domestic producers, and local industry-specific talent.

Powered by two CFM International LEAP 1C engines, the C919 is believed to compete with Boeing 737 and Airbus A320.

COMAC’s twin-engine ARJ-21 received a first type certificate from Civil Aviation Administration of China in December 2014. The ARJ-21 is designed to compete with Embraer and Bombardier aircraft.

According to Airbus 2014-2033 Global Market Forecast, China will have the highest domestic air traffic worldwide in the next ten years.

The country is estimated to require more than 5,300 aircraft with a total market value of $820bn.