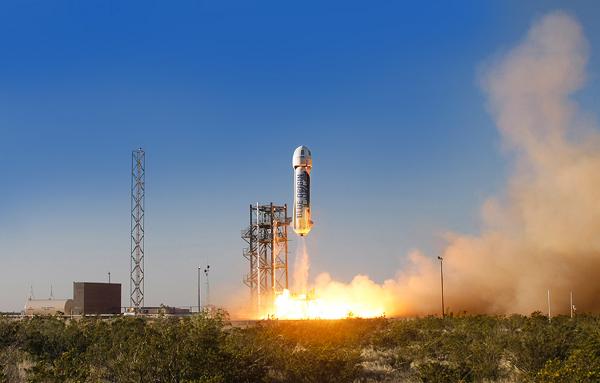 During the flight, the spaceship reached an altitude of 307,000ft prior to capsule return to Earth via a parachute.

The New Shepard was powered by 110,000-lbf thrust BE-3 engine, filled with liquid hydrogen, liquid oxygen.

Bezos said in a blog post: "The in-space separation of the crew capsule from the propulsion module was perfect.

"Any astronauts on-board would have had a very nice journey into space and a smooth return."

However, the company failed to recover the propulsion module as the pressure in the hydraulic system was lost during descent.

"Blue Origin intends to design the spaceship with the capacity to carry passengers and payloads to around 100km above the Earth."

Bezos said that the company is working on an improved hydraulic system, as well as assembly of propulsion module serial numbers 2 and 3, with plans to fly again soon.

Blue Origin intends to design the spaceship with the capacity to carry passengers and payloads to around 100km above the Earth.

Blue Origin president Rob Meyerson was quoted by Reuters as saying earlier that the company plans to conduct repeated unmanned flights before test pilots are on-board.

The company is also working on BE-4 engine which can generate 550,000lbf thrust at sea level, and has partnered with United Launch Alliance (ULA) for the BE-4 programme.

Among other companies that are developing privately owned spaceships include Virgin Galactic, Space Exploration Technologies, and Boeing.

Image: The New Shepard spaceship reached an altitude of 307,000ft during the test flight. Photo: courtesy of Blue Origin.