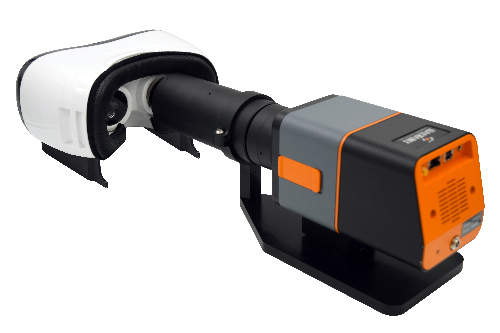 The AR/VR lens features a unique optical design specially engineered for measuring the visual quality of near-eye displays (NEDs) inside virtual (VR), mixed (MR), and augmented reality (AR) headsets. The lens design simulates the size, position, and field of view of the human eye, featuring an aperture at the front of the lens to position the imaging system’s entrance pupil within NED headsets at the same location as the human eye.

Radiant Vision Systems chief solutions officers Doug Kreysar said: “In order to correctly assess the quality of near-eye displays as viewed by a human observer, the measurement system should replicate the ability of the human eye to receive immersive visual input, and at a similar distance from the display.

“The challenge is that existing photometric measurement devices have been designed to evaluate more traditional displays like televisions and smartphones.

“In these systems, standard optical components position the aperture deep within the lens enclosure, limiting the camera’s ability to capture the full angular field of view of the display without occlusion by NED headset hardware.

“The Radiant Vision Systems AR/VR lens, by comparison, features aperture characteristics that replicate the human eye in NED headsets, including an entrance pupil positioned directly at the headset eye lens. In addition, we are able to measure a large 120° field of view, suitable to measure advanced VR devices.”

Radiant TrueTest™ Software provides the leading test suite for display measurement, as well as specialised tests required in AR/VR testing, with the capability to sequence tests for rapid evaluation of all relevant display characteristics in a matter of seconds, applying selected tests to a single image captured by the camera.

Standard tests in TrueTest include luminance, chromaticity, contrast, uniformity, mura (blemishes), pixel and line defects, and more. Unique tests for AR/VR display analysis include Slant Edge Contrast (for MTF measurement based on ISO 12233), Image Distortion (for distortion characterisation), Image Retention/Sticking, and X,Y position reported in degrees (°). With this complete Radiant solution configured for exact application needs, manufacturers can realise an efficient measurement process with the benefit of a single provider with end-to-end support.

The AR/VR lens is an optional mounting accessory for Radiant’s 16 or 29-megapixel CCD-based ProMetric Y Imaging Photometer or ProMetric I Imaging Colorimeter. By mounting a lens directly to a ProMetric imaging photometer or colorimeter, the AR/VR lens offers the most efficient means of measuring NEDs as a turnkey, compact camera / lens solution that requires minimal setup and integration time, equipment, or expertise.

The AR/VR lens can easily be removed and replaced with standard lenses for additional display measurement applications such as testing displays outside of headset equipment or on the production line.