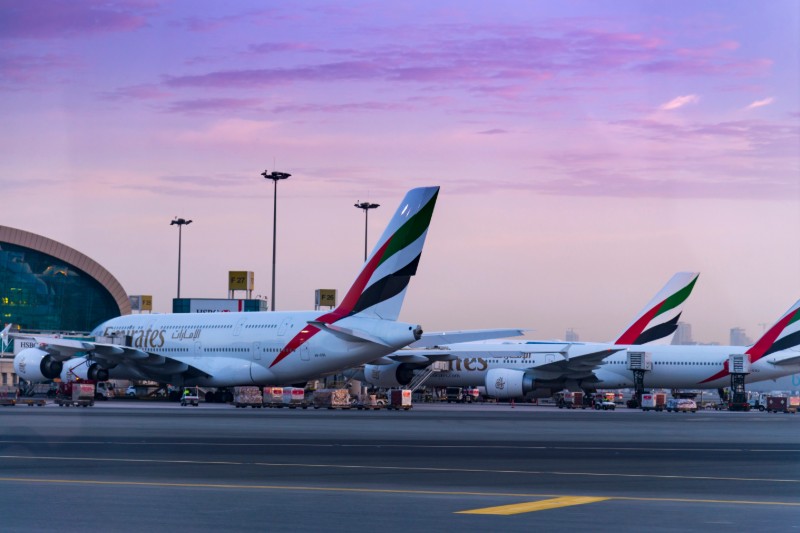 Emirates has suspended all passenger services for a period of three months. Credit: iamlukyeee / Shutterstock.

On 22 March, the Middle East’s Dubai-based Emirates Airlines announced the shocking news that it was suspending all passenger services for three months from 25 March due to the Covid-19 crisis. Its planes were to be grounded and the company’s 103,000 employees were to receive reduced pay, with many going down to half pay.

With their distinctive red, white, green and black tailfins, Emirates’ aircraft have been the standard bearer for Dubai’s stellar rise over the past three decades. The carrier’s fleet of ultramodern wide body aircraft has carried passengers to and from every corner of the planet via the airline’s Dubai hub. Its army of pilots, cabin crew and ground staff have brought hundreds of millions of people to live, work, holiday and spend money in the UAE.

But just as Emirates has spearheaded the rise and growing global outreach of Dubai and the UAE, it has now become the primary symbol of a crisis that has engulfed the global economy.

As the airline industry reels from the impact of global travel restrictions aimed at slowing the spread of coronavirus (Covid-19), Emirates decided the best way to get through the crisis was to stop doing business.

“The world has literally gone into quarantine due to the Covid-19 outbreak,” he said. “We want to avoid cutting jobs. When demand picks up again, we also want to be able to quickly ramp up and resume services for our customers.”

In the weeks ahead, Emirates’ actions will be replicated by companies around the world.

The social restrictions being implemented to slow the spread of Covid-19 are shutting down the global economy for an indefinite period.

Faced with a collapse in revenues, the only practical option available to many companies is to cut costs, and even suspend core operations. Some businesses may never restart.

The question facing every country is simply: How do we get through the crisis?

The immediate challenge is that it is a public health crisis that, if not brought under control quickly, could see the collapse of healthcare systems around the world. But the actions being taken to prevent that from happening threaten to create a deep economic crisis caused by the widespread failure of businesses.

Bankruptcy fears in the Middle East

This raises fears of widespread social instability triggered by mass unemployment, and also the spectre of a new global financial crisis caused by a rise in loan defaults at the same time as bank balance sheets are deteriorating rapidly due to loss in the value of their assets.

“The biggest economic risk is that many companies become insolvent and more face bankruptcy at a scale and frequency that is unprecedented in modern history,” says Omar al-Ubaidly, director of research at Bahrain-based think tank Derasat. “This will hit other sectors such as banking and increase unemployment and social risk.”

Central banks have moved swiftly to introduce monetary easing policies such as cutting interest rates to lower the cost of borrowing, and quantitative easing. These measures aim to ensure that money is available to banks to allow them to ease loan repayment terms in order to help keep people and businesses afloat.

Saudi Arabia’s Minister of Finance and Acting Minister of Economy and Planning Mohammed bin Abdullah al-Jadaan on 20 March announced financial support and stimulus measures totalling SR70bn ($19bn) to help the economy deal with the disruption caused by the pandemic.

Riyadh is also reviewing its 2020 budget and funding will be reallocated to sectors that need the most support, such as healthcare. The announcement adds to the SR50bn of support previously announced by the Saudi Arabian Monetary Authority.

On 14 March, the UAE Central Bank launched AED100bn ($27bn) of credit and capital, along with a series of other financial measures to provide temporary exemption from principal payments and interest on existing loans to all private sector companies and individuals affected by the coronavirus outbreak in the country.

On 22 March, the UAE approved a AED16bn ($4.4bn) economic stimulus package that includes measures to accelerate major infrastructure projects across the federation. The measures include a renewable six-month suspension of work permit fees and reduction of labour and other charges.

Globally, it is arguably the biggest financial intervention in history. In effect the entire global economy has been put on unemployment benefit.

Most economists say that these actions will be enough to prevent a financial crisis. But nobody can be certain. “It depends on how long it lasts,” is the most often repeated phrase.

The health crisis will pass. And business activity will recover. Only then will it be possible to understand the true extent of the economic impact of Covid-19. But few places will feel it as much as the Middle East.

For the past three years, the region’s oil producers have worked closely with non-Opec oil producers such as Russia to curb oil production in order to stabilise oil prices at between $50-$70 a barrel.

The slump in demand for oil triggered by the Covid-19 outbreak led to the collapse of cooperation between producers, primarily between Saudi Arabia and Russia, and has sparked an all-out price war for oil market share, with Saudi Arabia promising to opening up its taps to pump out as much as 12.3 million barrels a day (b/d) of oil for the rest of 2020, up from 9.7 million b/d in February.

“It looks like the oil price war that is now launched is a strategic move by Saudi Arabia to weaken or destroy shale oil,” says economist Nasser Saidi, founder and president of Nasser Saidi & Associates.

“It was bound to happen. There are two factors negatively effecting oil – renewables and shale. Shale was eating into the Opec plus share. They either wait and continue to lose market share or they act. They could choose now or later. They chose now.”

The subsequent collapse in oil prices to below $27 a barrel on 20 March from close to $73 a barrel on 3 January has shredded any fiscal plans that existed across the region. With stimulus spending initiatives on top of existing spending commitments, fiscal deficits are set to soar.

Many regional analysts are predicting a recovery in oil prices in the final quarter of the year. Few are confident.

“We are forecasting average for Brent in 2020 of $44 a barrel,” says a Riyadh-based analyst. “But with downside risk.”

With deficits in the GCC rising in 2020, perhaps as high as 30% of GDP, governments will fund their deficit spending through a combination of borrowing and drawdowns on reserves.

“I estimate that because of the losses, the GCC needs to raise $160bn-$180bn in 2020 to maintain current spending deficits and provide financial support to some industries such as aviation,” says Saidi.

Most of the funding is likely to come from increased borrowing. This will see national debt rising sharply as a percentage of GDP in addition to the deficits.

“I believe a mix of funding will be used to cover the deficits,” says Monica Malik, chief economist at Abu Dhabi Commercial Bank.

“Reserves are still high in global terms, but GCC countries entered this crisis in a weaker position than in 2015-16. The fiscal reforms have only gone so far. With weak global demand and a rise in supply, oil inventories will rise. The critical question is how long the oil price war lasts and what comes after.”

Capital expenditure is likely to be reduced to support spending on salaries, pensions and stimulus initiatives. And the strategic focus is likely to shift to new areas.

“Human capital building will increase in priority,” says Al-Ubaidly. “In light of the disruption to education, the need for a flexible, adaptable workforce is evident from this crisis.

“I will not be surprised if oil and gas investment in the Gulf is not significantly affected,” says Al-Ubaidly.

“If oil prices fall, oil investment outside the Gulf will collapse. So there is a big opportunity for Gulf investment in oil and gas. What will not get priority is the megaprojects. The big eye catching projects will fall down the pecking order.”

No significant announcements have been made about projects being delayed or cancelled in the region, but the projects sector will be significantly affected by cuts to capital spending.

“The likelihood is that many will be delayed or postponed,” says Saidi. “And the net result is that structural adjustment, in terms of diversification, will be more difficult unless they bite the bullet and open up privatisation and public-private partnerships (PPPs). To me, this is the time to provide incentives.”

The region, and the world, is focused on getting through a public health crisis with as much as possible left intact. At this stage, it is not possible to say how long this phase of the crisis will take. However, it is certain that the economic impact of the pandemic will take many years to overcome. What comes after will be a new ‘New Normal’ for the region.