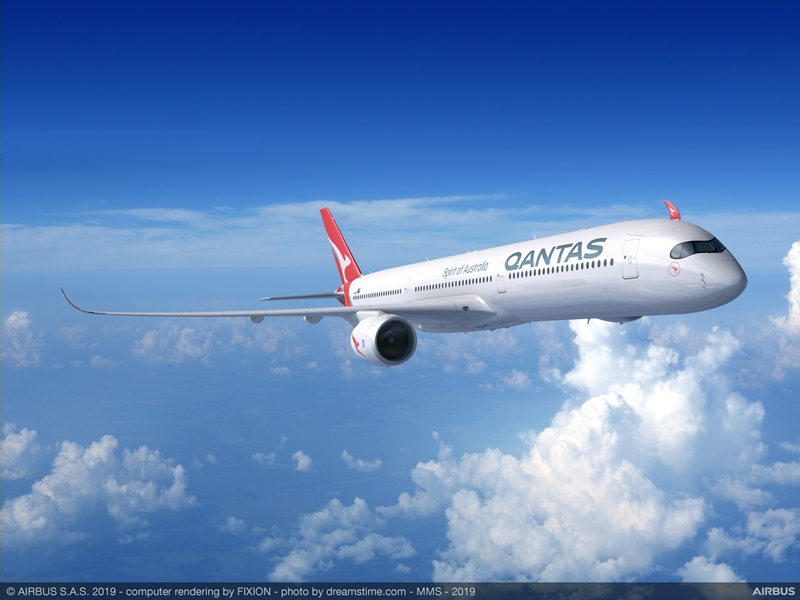 Qantas has selected the A350-1000 as the preferred aircraft if Sunrise proceeds. Credit: Qantas Airways Limited.

After detailed evaluation Qantas declared that the Airbus A350-1000 was their preferred aircraft, triumphing over the Boeing 777X offering.

The announcement comes two years after the challenge set by Qantas. This was to design an aircraft that could fly for 20 hours and in excess of 10,500 miles. Dubbed Project Sunrise, the new ultra-long haul routes proposed by Qantas are not feasible with current passenger jets.

Qantas is looking to purchase 12 aircraft by 2023, the proposed year for the new routes. Citi Bank predicted that the deal would cost between AUD3m ($2.2m) and AUD3.5m ($2.6), with investment phased over three years.

This will ensure Airbus is the leader in new ultra-long haul flying, leaving Boeing behind. Furthermore, it adds to ongoing troubles at Boeing and rapidly diminishing global reputation.

The Airbus victory comes in the wake of Boeing dealing with two fatal crashes and the subsequent grounding of the 737 Max fleet.

Peter Harbison, executive chairman of CAPA – Centre for Aviation, suggested the Qantas decision to opt for Airbus made sense. He argued that Boeing ‘would have been hard pressed to dedicate considerable time to a relatively small order like this at such a difficult time’.

The troubles have already delayed Boeing’s 777X program with the first delivery now not expected until 2021, despite 325 currently on order. This has led to concerns by major airlines who are considering alternative options.

In June, Emirates was rumored to be reconsidering its large order of 115 777-9s and 35 777-8s, particularly with new Airbus A380s now a viable alternative, due to the similar estimated 2021 completion date.

This demonstrates that Airbus is currently the more reliable company with Boeing causing frequent headaches for major airlines. The Qantas decision has undoubtedly been influenced by this, particularly due to the importance of its flagship project which has enough concerns of its own.

Project Sunrise is still not confirmed

Project Sunrise is aimed to attract consumers from rival airlines through non-stop flights connecting eastern Australia with premium destinations across the world.  It currently operates the one of the world’s longest routes from Perth to London which takes 17 hours and 20 minutes.

However, the airline has delayed the final decision on whether to confirm the project will go ahead until March 2020. This is due to the ongoing negotiations with pilots over new industrial relations which is required for the longer flights.

Qantas CEO, Alan Joyce, stated that the project will only go ahead if the airline is sure that it “will generate the right return for our shareholders given the inherent commercial risks”.

Despite this, the Airbus agreement seems to have brought the concept closer to reality and it would be a surprise if the plans were cancelled.