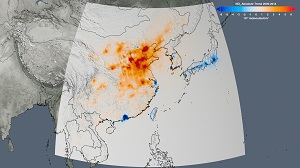 The US and Europe have shown a ‘dramatic’ reduction in nitrogen dioxide emissions between 2005 and 2014, although they continue to be the largest emitters of the poisonous gas.

China has seen an increase in levels by 20% – 50%, according to the findings of a Nasa team.

The findings were presented at the American Geophysical Union meeting in San Francisco and were published in the Journal of Geophysical Research.

The observations were made by a Dutch-Finnish ozone monitoring instrument onboard Nasa’s Aura satellite that detects the yellow-brown nitrogen dioxide gas.

Emitted from cars, power plants and industrial activity, nitrogen dioxide can transform into ground-level ozone, a cause of respiratory problems among the urban population.

The high resolution satellite captured data with better accuracy than previous low resolution ones, which missed variations over short distances.

Duncan said: "With the new high-resolution data, we are now able to zoom down to study pollution changes within cities, including from some individual sources, like large power plants."