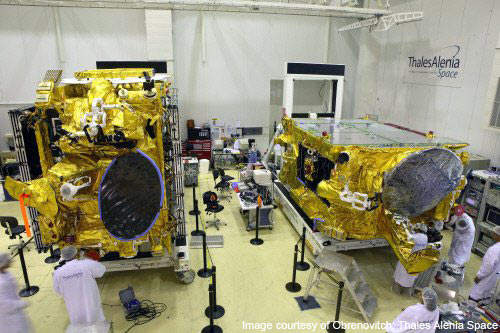 The Thales Alenia space clean room. The Thor 6 satellite is based on the Spacebus 4000 B2 platform by Thales Space. 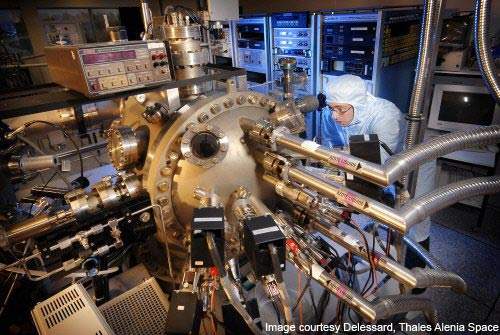 A Thales research worker. The Thor 6 spacecraft will increase the capacity in the Central and Eastern European regions. 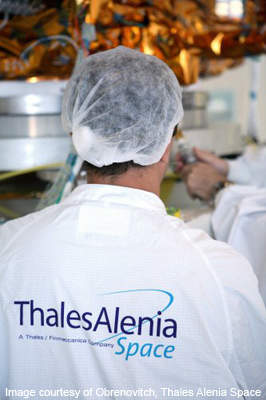 Thor 6 is manufactured by French company Thales Alenia Space, while Telenor Satellite Broadcasting AS is the owner and operator of the satellite.

Thor 6 is a telecommunication satellite primarily used for providing high-power direct-to-home (DTH) television broadcasting services from the 1° west orbital location. It was launched on 29 October 2009 by Ariane Space atop an Ariane 5ECA launcher from the Kourou Space Centre (Guiana Space Centre) in French Guiana. The satellite will provide services over the Nordic and Central European regions. The satellite is expected to be fully operational in space by early 2010.

Thor 6 is manufactured by French company Thales Alenia Space, while Telenor Satellite Broadcasting AS is the owner and operator of the satellite.

The satellite has been developed as a replacement for the Thor 3. Thor 6 is the final satellite ordered by Telenor under its replacement programme. It also offers the required satellite capacity for organic growth and expansion opportunities in the region.

Telenor is the leading satellite operator in the Nordic and European regions, providing 228 digital TV channels and 80 radio channels. Thor 3 and Thor 5 are the other satellites owned and operated by the company.

Thor 3 is the satellite that is currently providing DTH services in the Nordic, Central and Eastern European regions. The satellite comprises 14 Ku-band transponders and was designed for a life span of 12 years. It was launched in June 1998 and will end its services in 2010.

The Thor 6 satellite is based on the Spacebus 4000 B2 platform by Thales Space. The satellite has been designed for a life span of 15 years. The satellite weighs 2,999kg and consumes 5.9kW of power.

Thor 6 has around 36 channels and distributes 16 for fixed-base satellites and 20 for broadcast service satellites operating at transponder bandwidths of 27MHz and 33MHz respectively.

“The Thor 6 satellite has been developed as a replacement for the Thor 3.”

It included design, construction, tests and supplying the new geo-communications satellite, Thor 6. The order for Thor 6 is Thales Alenia Space’s first order for a satellite from Telenor. The total cost of Thor 6 is NKr1.3bn including the spacecraft, launch services and insurance.

Thales Alenia Space delivered Thor 6 to Telenor in September 2009. It was sent to Ariane Space in French Guiana on 1 October 2009.

Telenor has designed the ground station network to provide efficient media services such as TV, radio and data.

Telenor has three teleport locations for the satellite. The teleports in Sofia, Bulgaria operate antennas from four European locations. The Nitttedal Teleport near Oslo in Norway offers over 30 uplink systems and 40 antennas. It can operate satellites in the viewable arc from 45°W to 66°E (a third of all satellites).

The Central London teleport has approximately ten antennas positioning to satellites from 30º West to 50º East.