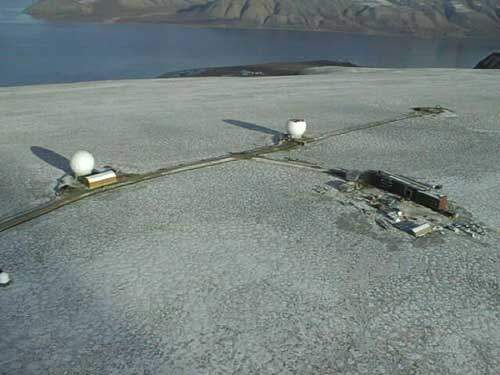 An aerial view of the Svalbard Ground Station. 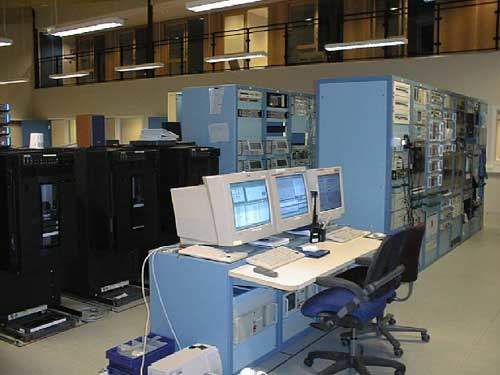 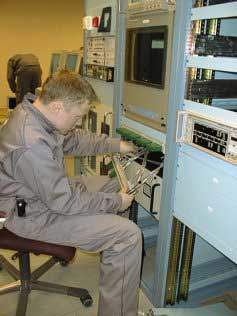 A technician installing part of the data processing equipment. 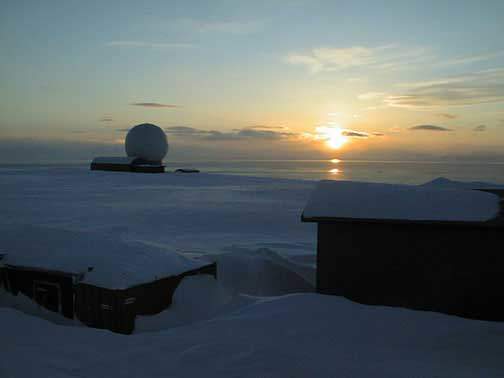 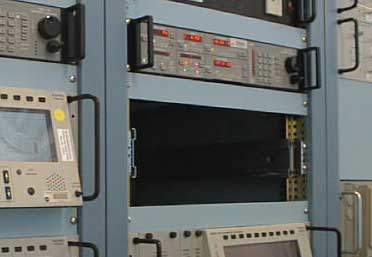 This gap in the equipment rack was later filled by a satellite status monitoring unit. 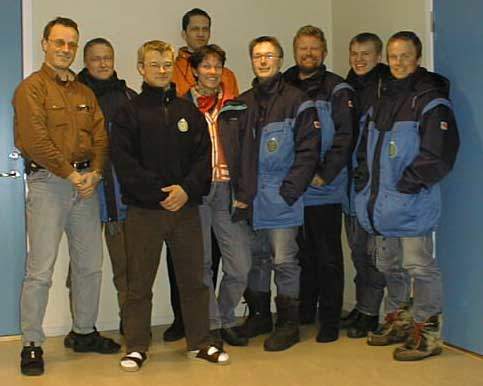 Eumetsat selected a site on Spitsbergen, a Svalbard island within the arctic circle as the site for a command and data acquisition (CDA) ground station for the Eumetsat polar system (EPS). Work started on the CDA station site in 1997, and the station plays a key part in the EPS ground segment infrastructure located in Norway – low-Earth polar orbiting satellites collect information during an Earth orbit, then download it all directly to a ground station when they are within line of sight.

The Svalbard ground station is owned by KSAT. It is principally used for data acquisition from early orbit support and LandSAT7. There are more than 15 apertures installed at the station – six large, three medium and and six small apertures.

The ground station at Svalbard is unique because it covers all 14 daily passes of polar orbiting satellites, allowing for a more continuous download of information. At this latitude one station provides complete coverage and two stations are no longer required. This is the main reason that the Norwegian Space Centre (NSC) has established SvalSat at Platåberget, near the town of Longyearbyen. SvalSat is a general-purpose station; operating, receiving data and disseminating information from polar orbiting satellites, and is also capable of tracking sounding rockets and early orbit support (EOS) for orbital launches. The Svalbard CDA site accommodation and station installation was completed in June 2003 and the first telephone call using the fibre cable system took place on 5 November 2003. It became fully operational on 1 February 2004.

“The Svalbard ground station is owned by KSAT.”

A new Iridium ground station was established at the KSAT Svalbard facility. The initial installation was fitted with two fully ground TAC terminals. A new SG4 antenna was installed and operated on 1 November 2004 to support the Integrated Program Office (IPO). It relays data acquired from the Windsat-Coriolis satellite to ground station.

Another six antennas that can communicate with polar orbiting satellites were installed at the Svalbard facility.

SvalSat became operational in 1997, and the first customer was Nasa, which uses it for its EOS satellites. Nasa has installed one 11m S-X band antenna system. The business idea for Svalbard satellite station is to provide cost-effective services to polar satellite operators. Smaller systems are served on a time and cost-sharing basis, while larger users may want to use dedicated equipment. This approach allows for flexible operation, which minimises operational costs.

NSC’s goal is to make SvalSat a key station in the global MTPE ground station system and the facility was proposed as a prime data reception station for the EOS follow-on satellites. Discussions were held between NSC and the Indian Space Research Organisation (ISRO) about the possibilities to locate a control station for the Indian IRS C/D and related missions at SvalSat. In 2004, the Korean Aerospace Institute (KARI) and the ISRO joined with the KSAT for accessing the ground station. The Indian Earth observation satellite system is growing significantly in size and complexity and SvalSat allows a 92% total coverage of seven Indian satellites. NSC is providing ISRO with TT&C (telemetry tracking and command) support 24 hours a day.

“The ground station at Svalbard is unique because it covers all 14 daily passes of polar orbiting satellites.”

The NSC provides the basic infrastructure, while Tromsø Satellite Station is the operator as an extension of its own satellite activities. Telenor provides telecommunication to and from SvalSat from the telecommunication node at Isfjord Radio and at the SvalSat site.

The antenna will be installed in August 2001 and is expected to be fully operational by the end of the year.

The antenna was fitted by KSAT to download, process, analyse, disseminate and store data for real-time and off-line Earth observation products and monitor services.