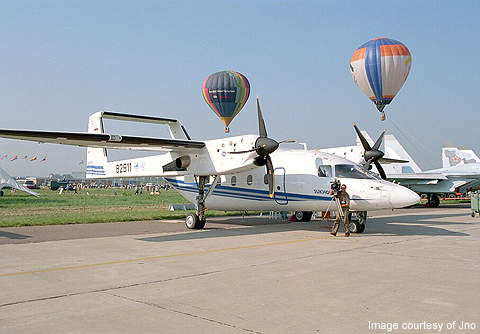 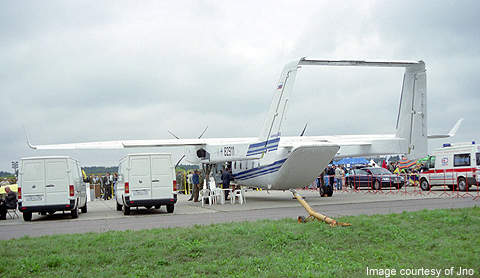 The rear view of the aircraft from where the cargo can be loaded or unloaded. 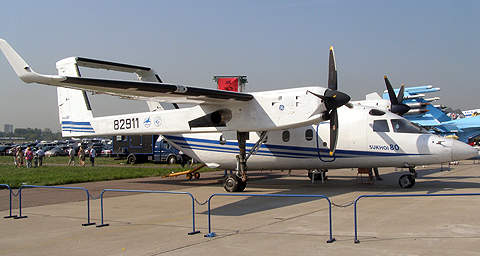 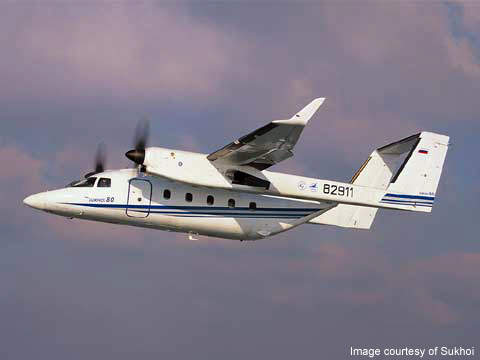 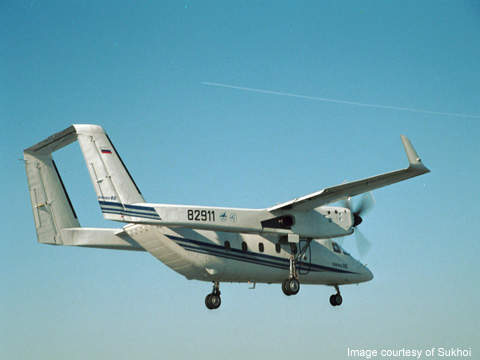 Su-80s have already been ordered by the air forces of China, Jordan and South Korea. 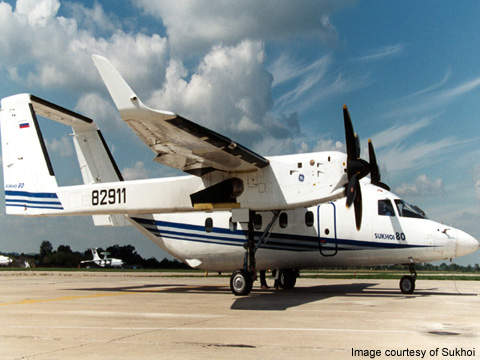 The Su-80 can accommodate up to 30 passengers, a pilot and a co-pilot.

Sukhoi Su-80 is a twin-engine, multi-purpose short take-off and landing (STOL) transport aircraft principally used for cargo and passenger transportation. It is designed and developed jointly by Sukhoi Company (JSC) and Komsomolsk-on-Amur Aircraft Production Association (KnAAPO), Russia. The aircraft can accommodate two crew (pilot and co-pilot) and cargo weighing 3,300kg. It is also known as the Sukhoi S-80.

The maiden flight of the aircraft took place on 4 September 2001. A total of eight Su-80 aircraft are currently in service worldwide. The Su-80 can fly either during day or night and any adverse weather conditions in commuter and regional air routes. It is certified under AP-25 airworthiness standards for transport aircraft.

The Su-80GP is a cargo or passenger aircraft. It can be easily converted from a passenger to cargo aircraft by equipping detachable roller tracks to the cabin deck and cargo ramp. The variant’s passenger version offers high comfort.

Another variant, the Su-80PT, is a patrol or transport aircraft used for national land and maritime border operations. It transmits high-quality relevant data to the ground station, acquits warning fire and destroys an intruder. The Su-80PT can also perform oil and gas pipeline monitoring, magnetometric measurement, and search and rescue operations.

The Su-80TD is a troop carrier or cargo aircraft designed to carry military units. It can be used to conduct parachute training, perform casevac / medevac missions and carry out other special missions.

“The aircraft can accommodate two crew and cargo weighing 3,300kg.”

The navigation system receives, processes and shows all flight data captured by the radars. It also alerts the crew about malfunctions and provides assistance in removing the errors occurred due to malfunction.

The Sukhoi Su-80 features a comfortable 27m3 cabin. The spacious and comfortable cabin can accommodate a pilot, co-pilot and 30 passengers with more leg room for all occupants. A single seat is also separately available for the flight attendant. Special equipment in the cargo bay of the aircraft allows it to use handling amenities.

“A total of eight Su-80 aircraft are currently in service worldwide.”

The aircraft is equipped with an aerial navigation and indication system, an aerial signals system, an automatic radio compass, a radio altitude-sensing and speed-measuring system, and distance measuring equipment.

The Su-80 features pressurised fuselage, which supports the wing and pylon. The fuselage section of the aircraft accommodates a radar bay, cockpit, avionics bay and mixed cargo cabin. The cargo ramp located in the fuselage section is used for loading and unloading cargo as well as to board passengers.

The height and width of the fuselage is 2.35m and 2.40m respectively. The fuselage clearance is 0.56m.

Among the eight aircraft manufactured, the first four pre-series were of short fuselage. Out of the remaining four aircraft, the fifth, sixth and seventh prototypes’ fuselages were extended by 1.4m (4ft 7in), providing an additional row of passenger seats.

The Su-80 is equipped with retractable tricycle landing gear along with a nose strut. The low-pressure tyres in the landing gear system allow the aircraft to land on small airfields, and unpaved, ice and snow-covered runways. It can operate in a wide range of temperatures and G-limits.

The dimensions of the tread and wheel base of the landing gear system are 6.3m and 6.34m respectively.

The Su-80 is powered by two General Electric CT7-9B turboprop engines in the bays at the front of the booms. Each engine can produce 1,305kW of electric power. The engine has been designed to be highly reliable and boost operational availability, thereby reducing the overall cost.

The length and diameter of the engine is 2.43m and 0.73m respectively. Each engine has six compressor stages and a dry weight of 366kg.