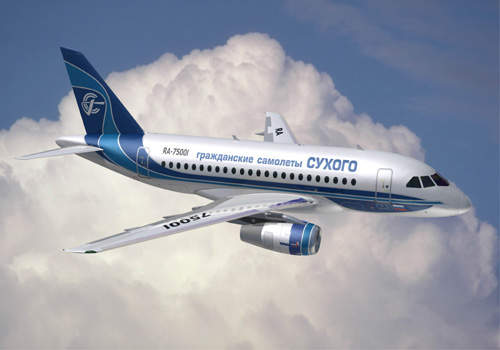 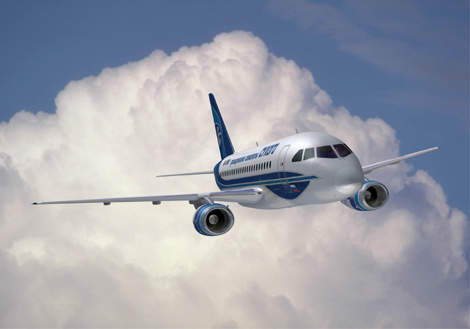 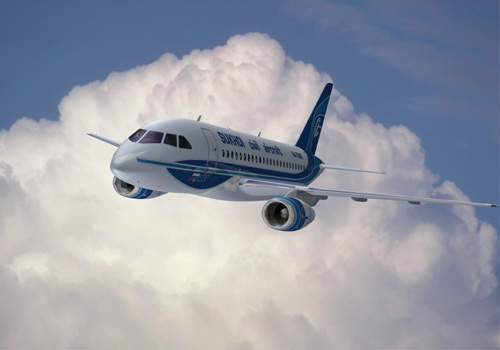 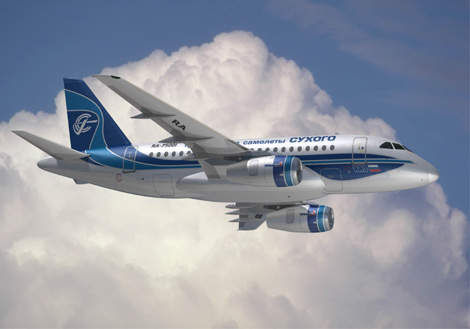 The launch customer is the Russian carrier, Sibir Airlines, which placed an order for 50 Superjet 100-95 regional airliners in July 2004. 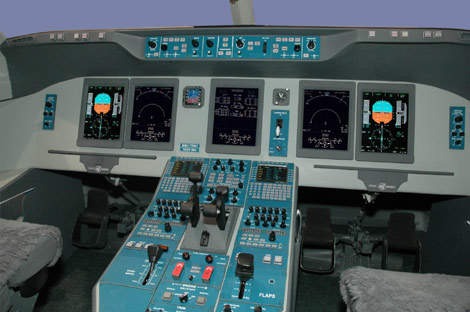 Thales is responsible for the Superjet 100 avionics suite, including displays, communication, navigation and surveillance systems.

The Sukhoi Civil Aircraft Company (AVPK Sukhoi) announced the Russian Regional Jet (RRJ) programme in June 2001. Sukhoi was responsible for design and manufacture of the aircraft. The Russian Aviation and Space Agency (Rosaviakosmos) and the Boeing Company agreed the joint development and marketing of the Russian Regional Jet and Sukhoi, Ilyushin and Boeing formally signed a joint industrial agreement in July 2001.

Ilyushin was responsible for certification of the aircraft. Boeing has been responsible for marketing activities (including sales and leasing) and after sales support (including operational logistics support, maintenance and spares). The aircraft was renamed the Sukhoi Superjet 100 in July 2006.

In March 2003, Rosaviakosmos announced the Russian Government’s selection of the Sukhoi RRJ to meet an initial build for 200 regional jets.

First flights of the Superjet 100

The 95-seat Superjet 100 was rolled out in September 2007 at the KnAAPO assembly plant in Komsolmosk-on-Amur, Siberia. First flight of the aircraft took place in May 2008. A second aircraft entered the flight test programme with first flight in December 2008. A third aircraft made its flight test in July 2009. 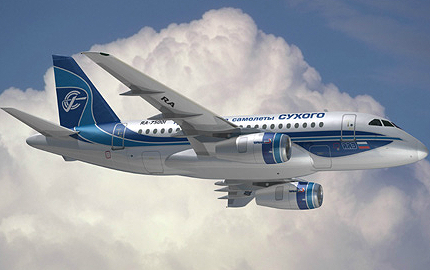 At the 2009 Paris Air Show, where the plane made its premiere flight, Hungarian national carrier Malev Airlines signed a statement of intent to purchase 30 Superjet 100 for €710m.

In September 2007, Sukhoi and Alenia Aeronautica set up a joint venture company, Superjet International. The company is owned 51% by Alenia and 49% by Sukhoi and is responsible for marketing and support of the aircraft in the West. A completion and delivery centre is located in Venice, Italy.

In July 2012, Interjet converted its five options under a contract signed in January 2011 into firm orders. All the five aircraft were delivered by February 2014.

The first aircraft was delivered to Armavia in April 2011. In June 2011, the aircraft entered commercial operations with Aeroflot. Aeroflot received sixth full-specification SSJ 100 aircraft in February 2014.

In October 2011, SuperJet International received a $200m order from Comlux The Aviation Group for two Sukhoi Business Jets (SBJ) plus two options. Deliveries are scheduled to take place in 2014.

The normal seating configuration is three plus two in economy class and two plus two in business class.

The Superjet 100-75 and -95 variants seat up to 78 and 98 passengers. Both variants are to be built in standard and long range versions.

The Superjet 100-95 was the first aircraft built. The aircraft variants have maximum commonality in design, for example in structural design, system fits, avionics, landing gear, electrical systems and power systems.

There are underfloor baggage hold compartments in the lower section of the fuselage beneath the rear and forward cabins. The baggage compartment volume in the RRJ-75 is 16.1m³.

The Superjet 100-95, overall length 30m, is a stretched version of the baseline Superjet 100-75 with two additional plugs in the fuselage sections forward and aft of the wing. There is also scope for the future development of VIP and cargo versions of the SSJ 100.

A business jet version of the aircraft was announced in June 2011. It is available in the VIP, corporate and government configurations.

Novosibirsk Aircraft Production Association (NAPO), a member of the Sukhoi Holding, manufactures about 40% of the RRJ, including the nose section, vertical and horizontal tail surfaces and the auxiliary power unit.

In March 2005, Sogitech of France and Sukhoi Civil Aircraft signed an agreement to jointly develop the specifications for creating interactive electronic technical publications for through life after-sales support.

In June 2005, Thales announced its selection by Sukhoi and the award of a contract to provide the avionics suite for the new Superjet 100 aircraft. The flight deck is of similar design to that on the Airbus A380 aircraft. The avionics suite includes the cockpit displays, communication, navigation and surveillance systems. CMC Electronics is the supplier for the CMA-9000 flight management system (FMS).

"The Superjet 100 is powered by two podded engines under the wings."

Leibherr Aerospace, based in Toulouse, and the Voscod Design Centre in Russia are responsible for the RRJ’s flight control system.

Leibherr is also developing the air control and conditioning system. 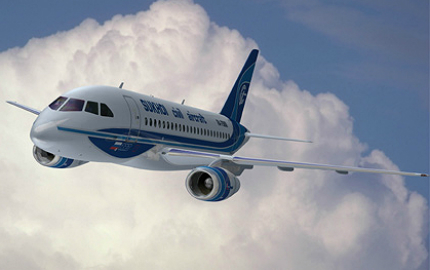 Snecma Moteurs and NPO Saturn have set up a joint venture, Powerjet, to produce the SaM146 turbofan engines.

The Sukhoi RRJ is powered by two podded engines mounted under the wings. Snecma Moteurs and NPO Saturn have set up a joint venture, Powerjet, to produce the SaM146 turbofan engines. Each SaM146 engine is rated at 62kN to 71kN and is fitted with Snecma full authority digital electronic control (FADEC). The engines’ low-pressure system is developed by NPO Saturn.

The Gromov Flight Research Institute signed an agreement with Snecma Moteurs to develop an Ilyushin Il-76 flying testbed for the SaM146 turbofan engines. Flight testing of the engine began in December 2007.

Intertechnique, based in France, is supplying the fuel systems. The aircraft has a fuel capacity of 13,135l.

The aircraft’s auxiliary power supply is designed by Honeywell and MMPP Salyut. The aircraft is equipped with Hamilton Sundstrand electrical systems and Curtiss Wright fire suppressors.

Superjet 100 is fitted with Messier-Dowty retractable twin-wheeled tricycle-type landing gear with a Sukhoi braking system and Goodrich wheels and brakes. Four-wheel bogies are offered as an option for the main landing gear units.