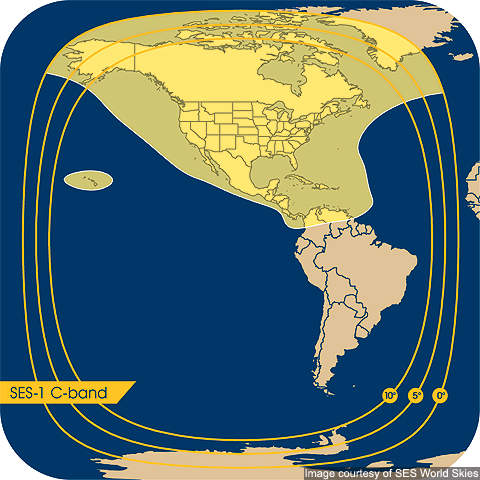 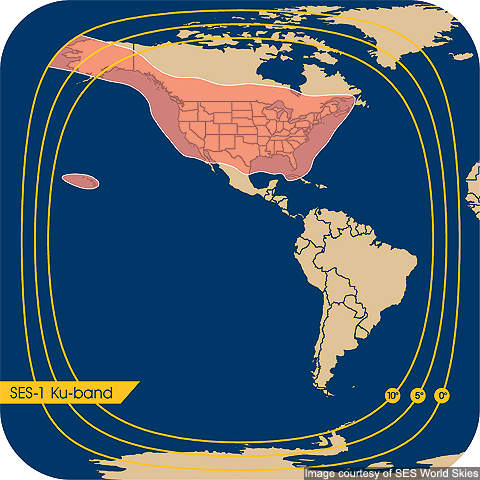 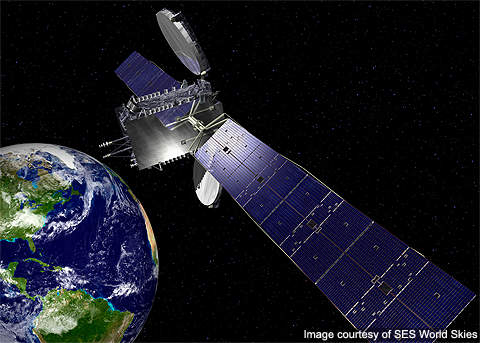 The SES-1 providing DTH service to VSAT in the US.

SES-1 is a telecommunication satellite principally used for providing high-power direct-to-home (DTH) and digital broadcasting services to very small aperture terminals (VSAT) in the US. It is currently being operated from the 101° west longitude.

The satellite, which is part of the SES fleet, was launched into geostationary orbit on 24 April 2010. SES-1 has replaced the existing AMC-2 and AMC-4 satellites located at 101° west. It is the 42nd satellite in the SES global fleet.

SES-1 was initially ordered by SES Americom. The satellite was renamed as AMC-1R in April 2008 and later as AMC-4R. It was finally designated as SES-1 when SES Americom collaborated with SES Skies.

SES-1 is the first satellite launched with SES designation after collaboration. The satellite will temporarily replace the AMC-11 located 131° west in May 2010.

SES World Skies ordered five similar SES satellites in 2007. Orbital Science Corporation is the prime contractor involved in manufacturing the SES fleet. The SES-1 was designed, manufactured and demonstrated at the manufacturing facility located in Dulles, Virginia. It has been designed to serve for a lifespan of 15 years.

“The Star 2.4 is the largest and powerful satellite bus principally used for geostationary communications.”

The satellite weighs around 3,152kg and consumes 5kW of power. Four solar panels are also fitted to the spacecraft for providing electricity to the satellite when one of the power systems fails. The solar panels absorb thermal energy from the sun and convert it into electrical energy.

Two additional satellites, including SES-2 and SES-3, are currently under construction at Orbital’s manufacturing facility in Dulles, Virginia. SES-1, SES-2 and SES-3 satellites together provide coverage to 50 states in the US.

A digital channel transponder satellite, the SES-1 provides communication capacity, connectivity and flexibility. 24 Ku-band and 24 C-band transponders of 36MHz capacity are installed in the satellite. Six channels in each band are cross connected to the opposite band for offering new service capability.

Manufactured by Orbital Science Corporation, the Star 2.4 is the largest and powerful satellite bus principally used for geostationary communications. The spacecraft bus is also equipped with two lithium-ion batteries of 4,840W capacity. The payloads, including earth-viewing instruments and thermal radiators, are fitted on the nadir facing deck.

The structure of the bus is made of aluminium facesheets and aluminium honeycomb core fitted with heat pipes and conductors. The nominal voltage of the bus is +36VDC. An altitude and orbit control system with star trackers is installed in the Star 2.4 bus.

The SES-1 was launched on the piggyback of International Launch Service’s (ILS) Proton Briz M launch vehicle. The vehicle is powered by Monopropellant (hydrazine) on-orbit system.

“The SES-1 satellite was launched on the piggyback of ILS’ Proton Briz M launch vehicle.”

The name of the launch vehicle has been derived from the ‘Proton’ rocket and ‘Briz M’ booster stage manufactured by the Khrunichev State Research and Production Space Center, Russia.

The launcher successfully released the satellite into geostationary orbit after 8 hours and 58 minutes of take-off time from the Khrunichev Research and Production Center in Baikonur Cosmodrome. It was launched by ILS.

The first signal was received from the satellite at a control station located in Perth, Australia. The complex and superior performance ground control system (GCS) was supplied by Orbital Science Corporation. The GCS is equipped with automated programmed hardware to provide stability and continuous operations.

The SES-1 operating in the Ku-band and C-band can be controlled and tracked by using telemetry tracking and command links (TT&C) system. The TT&C system is a technology used principally to track and control the satellite when deviating from its orbit. Communication between the SES-1 and the ground station takes place through the 36MHz (bandwidth) allocated to the service provider.