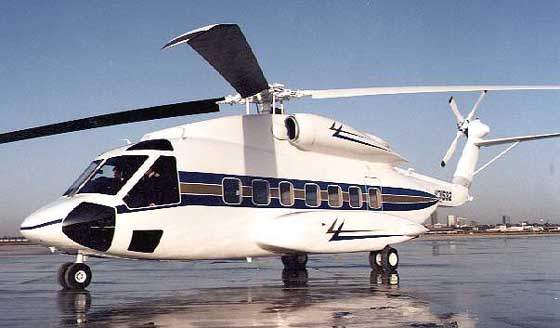 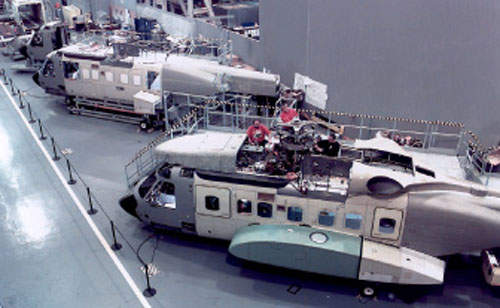 The S-92 being assembled at Sikorsky Stratford plant. 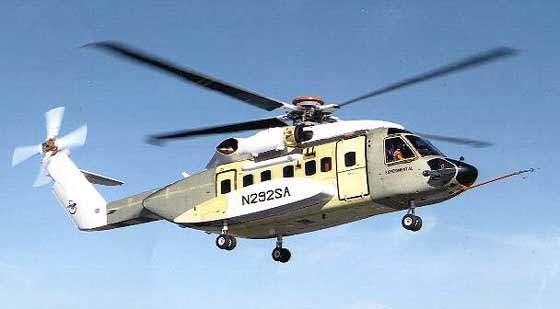 The S-92 prototype during flight trials.

The S-92 Helibus will have the capacity to carry 22 passengers. 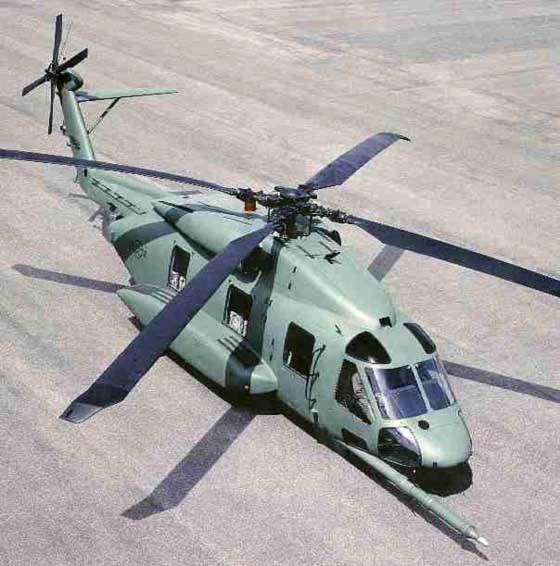 Sikorsky's full mock-up of the military version of the S-92 showing its air-to-air refueling probe.

The S-92 medium-lift twin-engine helicopter is manufactured by the Sikorsky Aircraft Corporation. The S-92 is an evolution of Sikorsky’s S-70 US Army Black Hawk and US Navy Seahawk helicopters and is available in a 19-seat passenger commercial, a 22 troop utility and a number of mission-specific configurations including search and rescue (SAR), government and VIP transportation.

The first S-92 was delivered to launch customer Petroleum Helicopters Inc (PHI) in September 2004. PHI has ordered six helicopters for offshore oil operations in the Gulf of Mexico.

Orders have been received for more than 75 helicopters, including: Cougar Helicopter (up to five), Era Aviation (three), Aircontactgruppen AS of Norway (six), Copterline of Finland, East Asia Airlines / Helicopter Hong Kong (one), CHC Helicopter Corp. of Canada (three), the government of Turkmenistan (two for presidential transport, delivery 2005-06), Gulf Helicopters (one for VVIP), Washington Times Aviation (five), the government of Turkey (one for VVIP), Irish Air Corps (three plus two options), Norsk Helikopter (four for offshore oil), Brunei Shell Petroleum (three), Eastern General Aviation (one) and Bristow Group (11). By the end of 2009, approximately 100 S-92 helicopters had been delivered.

“The Sikorsky
S-92 is a medium-lift twin-engine helicopter.”

An international team of companies has worked with Sikorsky on the S-92 programme. These include: Embraer of Brazil, Gamesa of Spain, Mitsubishi Heavy Industries of Japan, Jingdezhen Helicopter Group / CATIC of the People’s Republic of China and Aerospace Industrial Development Corporation (AIDC) of Taiwan. Major subcontractors include Hamilton Sunderstrand, Rockwell Collins and General Electric.

In October 2005, the S-92 received certification from the FAA for flight in known icing conditions. It is also certified by the European Aviation Safety Agency (EASA).

On 15 July 2008 Sikorsky also announced sale of an S-92 VIP helicopter to Azerbaijan Airlines which will use the aircraft for corporate VIP missions. Expected to be delivered in 2011, the contract also has provisions for two additional helicopters for offshore oil missions. Offshore oil customers form the major segment (about 66%) of the S-92 buyers while others have been using the helicopter for search and rescue operations (SAR), head of state, VIP and airline missions.

In February 2009, Sikorsky Aerospace Services, which is the aftermarket service provider for the S-92 helicopters authorised VIH Aviation Group to repair and overhaul the aircraft’s gearboxes.

In September 2009 Tata Advanced Systems Ltd (TASL) entered into an agreement with Sikorsky to produce cabins for the S-92 in India. Being built at a new TASL greenfield facility in Hyderabad, the first cabin will be delivered in late 2010.

Sikorsky has performed retrofit the gearbox oil bowl in all the S-92 helicopter fleet with steel mounting studs in March 2009 as a precautionary safety measure when it found broken titanium studs during a helicopter crash in Canada. By the end of 2009 Sikorsky had completed retrofits for most of the 91 S-92 helicopters.

In September 2009, Sikorsky introduced a fully coupled and automated approach capability to reduce cockpit workload for safer operations on offshore oil platforms under challenging weather conditions. The new platform-finding system helps the pilot to programme the approach into the autopilot. This feature is proving very helpful at night and in low visibility. The new system will be equipped in all S-92 helicopters that are in service. The system is being put to flight testing at the company’s Development Flight Center in West Palm Beach, Florida. The new system obtained FAA certification in late 2009.

Sikorsky plans to improve the durability of the main gearbox of the S-92 and increase the helicopter’s maximum gross weight from 26,500lb to above 27,000lb.

The S-92 is available in a number of variants. The civil transport version, S-92A, has an airliner-type interior which comfortably seats 19 passengers in a 20ft-long, 6ft-high and 6ft 7in-wide stand-up cabin.

“The civil transport S-92 has an airliner-type interior which comfortably seats 19 passengers.”

The utility transport version has 22 side-facing seats in a large, stand-up cabin with a full cabin-width rear ramp. The 733ft³ interior cabin area can also be configured to accommodate up to three airline-style LD-3 cargo containers.

Additional stowage space is available in the 140ft³ area located in the aft ramp compartment.

H-92 Superhawk is the military variant which has been demonstrated to the US Air Force, Marine Corps and Coast Guard. H-92 has more powerful GE CT7-8C engines, rated at 2,300kW (3,070shp).

The search and rescue variant provides space for seats, litters, auxiliary fuel and SAR emergency equipment. The Superhawk was selected by Canada in July 2004, for the maritime helicopter programme (MHP), 28 helicopters are required.

The civil S-92 has a metal and composite airframe. The four-bladed articulated composite main rotor blade is wider and has a longer radius than the S-70 Blackhawk. The tapered blade tip sweeps back and angles downward to reduce noise and increase lift.

In response to requests for additional cabin space, Sikorsky has increased the cabin length of the final prototype by 41cm, reduced the height of the tail pylon and relocated the horizontal stabiliser. Tethered hover flight has recorded 31,000lbs of lift generated, both in and out-of-hover effect. The S-92 rotor system is damage-tolerant and has a crashworthy fuel system to enhance safety. It has a four axis, fully coupled autopilot system.

A number of safety features such as flaw tolerance, bird strike capability and engine burst containment have been incorporated into the design. An active vibration system ensures comfortable flight and acoustic levels are well below certification requirements.

“The Sikorsky
S-92 is available in a 19-seat passenger commercial, a 22 troop utility and a number of mission-specific configurations.”

The system is being fitted first on the H-92 military variant for Canada but will be fitted on the S-92 later.

The first flight of the H-92 with fly-by-wire controls was in December 2007. Certification of the system is yet to be achieved.

The civil S-92 is powered by two 1,877kW General Electric CT7-8 turboshaft engines with dual channel FADEC (full authority digital engine control). The CT7-8 is a derivative of GE’s T700/CT7 family of turboprop and turboshaft engines. The engines provide a range of 400nm (with fuel reserves), a cruising speed of 151kt and a 15,000ft service ceiling.