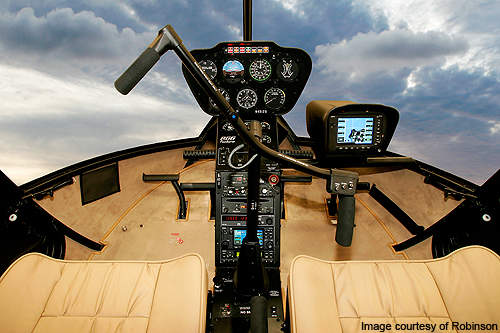 The seven-hole instrument panel of the R66. 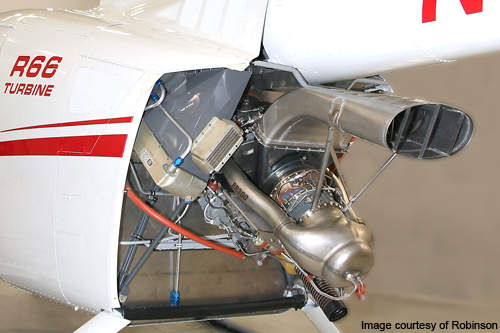 The R66 is powered by a Rolls-Royce RR300 turboshaft engine. 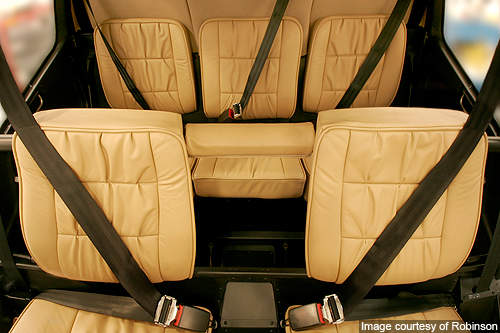 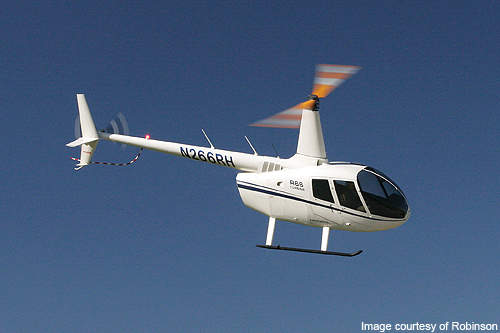 The R66 performing its maiden flight in November 2007. 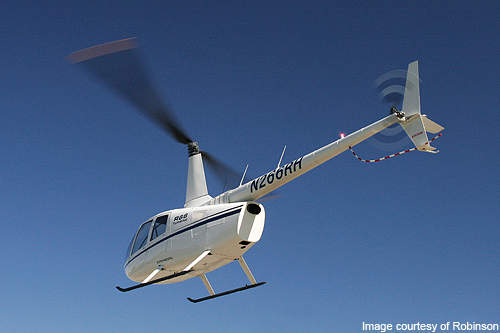 The two-blade main and tail rotor system of the R66 is made of aluminium.

The R66 is derived from its predecessor, the R44 helicopter. Three R66 prototypes are under development, and each will cost around $770,000.

RHC began to take orders for the R66 helicopter in February 2010. Deliveries to customers will begin in 2011. RHC is developing the basic model of the R66. It is expected to manufacture advanced police, electronic newsgathering and float versions in the future.

RHC began the preliminary design of the R66 helicopter in 2001. The Robinson R66 is being designed to perform medium-volume sightseeing missions. The helicopter is made of state-of-the-art composite materials, aluminium alloy sheet and chromoly steel.

The R66 was unveiled in March 2007, to compete with the larger Bell and Eurocopter helicopters. It took its maiden flight on 7 November 2007 at Torrance Airport, Southern California, in the US.

The certification of the helicopter was delayed due to failure in the conventional tail rotor design. It received Federal Aviation Administration (FAA) certification in October 2010 during a ceremony held at the Robinson headquarters in Torrance, California.

The R66 features an enclosed cockpit equipped with two side-by-side seats separated by T-bar central cyclic control. The widened back seat accommodates three passengers of 5ft 4in in height. The seats will have air bag seatbelts that meet general aviation aircraft standards. The aircraft’s cockpit also features a seven-hole instrument panel, fitted with a speedometer, altimeter, and a terrain avoidance and collision system.

A spacious baggage compartment is provided behind the seats for storing baggage or cargo. It can store a full-size suitcase, and be accessed through a single door on the passenger side.

The R66 is powered by a single Rolls-Royce RR300 turboshaft engine, which can produce 270hp (201kW) of output power. Its maximum continuous power is 225hp (167kW). Positioning the engine at a 370° angle saved headroom and provided space for a separate baggage compartment.

“The R66 is powered by a single Rolls-Royce RR300 turboshaft engine.”

The engine was specifically designed by Rolls-Royce for the R66 helicopter. It is small and light-weight compared to the Lycoming O-540 six-cylinder piston engine. The RR300 engine features a single stage centrifugal compressor, engine monitoring unit, transducers, starter or generator, sensors and terminal blocks.

The first Rolls-Royce RR300 engine was delivered to RHC in March 2008.

The R66 can climb at the rate of 1,000ft a minute. Its maximum speed is 222km. The range and service ceiling of the helicopter are 603km and 4,267m, respectively. The helicopter weighs around 580kg and its maximum take-off weight is 1,224kg.