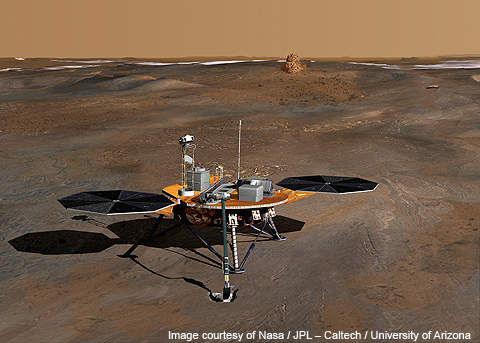 An artist's impression of the Phoenix Mars lander on the surface of the red planet. 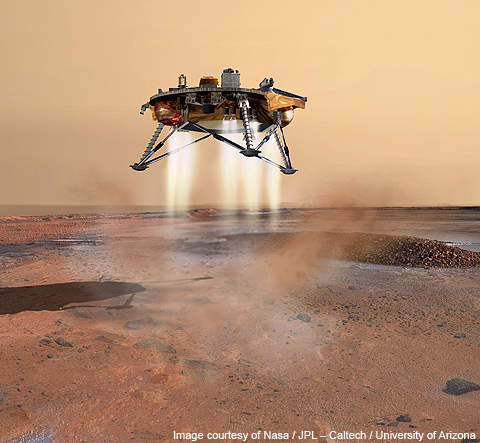 An artist's impression of the Phoenix lander as it makes its final descent. 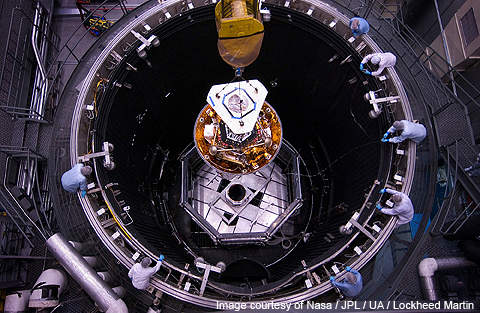 The Mars lander being lowered into the thermal vacuum. 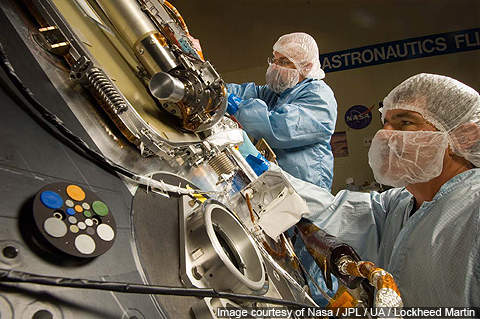 Technicians working on the science deck of the Phoenix lander. 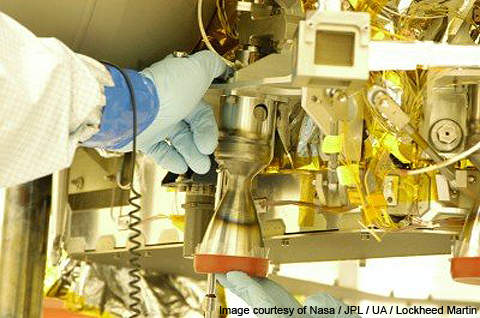 A technician works on the flight descent thrusters that allow Phoenix to land.

Phoenix was a Mars lander that was used for surface exploration. The robotic spacecraft probed the environment and conducted research on the history of water on the planet. Lockheed Martin was the prime contractor involved in the manufacture of the Phoenix Mars lander. It was operated by Nasa.

The spacecraft was 5.5m long. The diameter and height were 1.5m and 2.2m respectively. It weighed around 370kg. It was also fitted with an electrical system comprising two gallium arsenide solar array panels of 3.1m² area and batteries. These solar panels absorb energy from the sun and convert it into electrical energy.

Phoenix was developed to determine whether or not life had ever existed on Mars. The lander monitored and described the climate and geology of the planet. It excavated the icy layer in the circumpolar region of the planet with its robotic arm and collected samples of the soil for performing advanced scientific analysis with its on-board instruments. The Phoenix lander transmitted data from both poles to Nasa for analysis.

Phoenix was designed for a lifespan of three months but was operational for five months before seasonal ebb of sunlight terminated the mission.

“Phoenix was a Mars lander that was used for surface exploration.”

Preliminary design of the Mars lander was approved by Nasa in June 2005. It was designed and manufactured by Alliance Spacesystems. The robotic arm of the spacecraft was designed to dig 0.5m below the surface and could extend up to 2.35m away from the lander.

The Mars Odyssey Orbiter launched in 2002 determined the existence of hydrogen on the Martian surface through its gamma ray spectrometer. It also found that the only source of hydrogen on the planet was the frozen water in the form of ice below the surface. In an effort to identify the water on Mars, Nasa’s University of Arizona launched the Phoenix Mars lander in 2007 under a $420m Mars exploration programme.

Phoenix was launched on 4 August 2007 from Cape Canaveral Air Force Station, Florida, US. The spacecraft successfully landed on the northern polar region of the planet on 25 May 2008. The high-resolution imaging science experiment (HiRISE) camera of the Mars reconnaissance orbiter captured images of Phoenix as it landed on the surface of the planet. The existence of ice on Mars was confirmed by Phoenix in July 2008.

The spacecraft made its last communication with the Earth on 2 November 2008, as the solar power generation in the lander decreased with the Martian winter. Phoenix’s operations were terminated in May 2010.

“The Phoenix lander was developed to determine whether or not life had ever existed on Mars.”

Cameras and microscopes fitted on the spacecraft transmitted information on the landscape. Atmospheric pressure in the Arctic regions was monitored by a weather station fitted in the spacecraft.

The Phoenix Mars lander was launched atop a United Launch Alliance Delta II 7925 rocket launcher. The launch vehicle can lift medium-sized satellites and robotic explorers into the space. It is a three-stage rocket launcher fitted with nine strap-on solid rocket boosters and a 9.5ft payload fairing to safeguard its payload during the launch.

Phoenix was controlled and tracked from a ground station. A Doppler tracking data system tracked the spacecraft’s exact location and the RAD6000 computer system installed at the ground station transmitted commands to the lander.