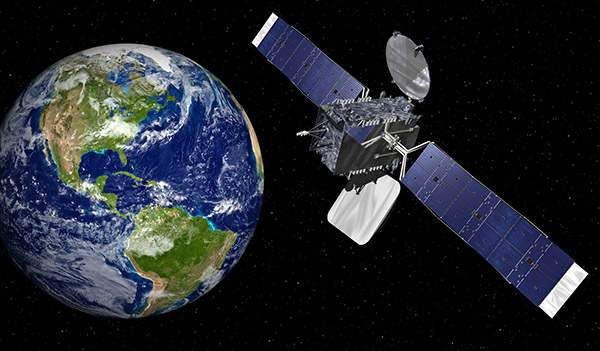 Bicentenario is positioned at 1,140&deg; West Longitude, and with an expected service life of 15 years, will serve Mexico and its surrounding waters. Image courtesy of Arianespace. 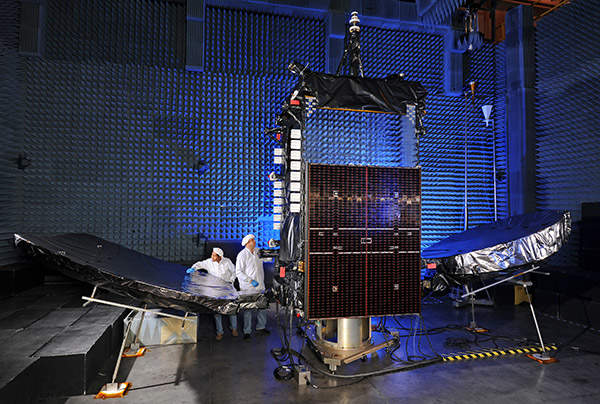 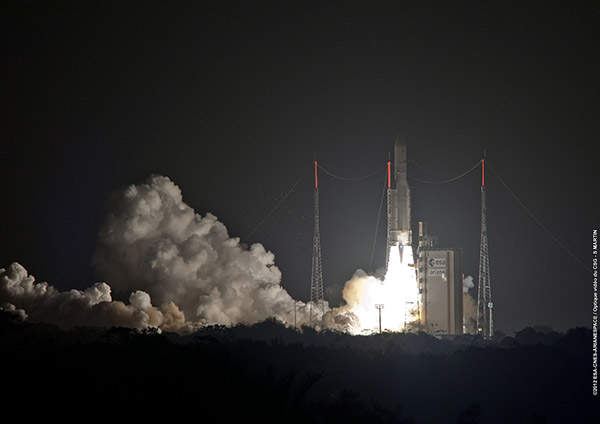 The satellite was launched with Skynet 5D on an Ariane 5 ECA rocket from Kourou, French Guiana. Image courtesy of Orbital Sciences Corporation. 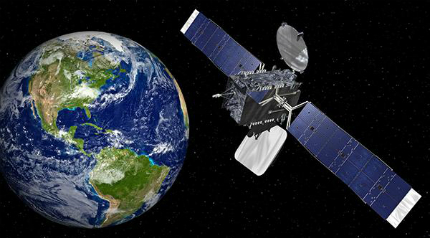 MEXSAT Bicentenario, launched through the Arian 5 ECA rocket in December 2012, is the first satellite in the series of three MEXSAT satellites and the only Fixed Satellite Services (FSS) provider among the three units ordered by the Mexican Secretariat of Communications and Transport (SCT).

Boeing, the main contractor for the construction of the MEXSATs, subcontracted the construction work of the satellite and ancillary ground equipments to Orbital Sciences. The critical design review of MEXSAT was completed in June 2012 and is based on Orbital’s GEOStar-2 platform.

"Bicentenario is positioned at 1,140° West Longitude and has an expected service life of 15 years."

The satellite was built at Orbital’s site in Dulles Virginia and transported for launch at Kourou in French Guiana through a Boeing 747 cargo aircraft.

The other two Boeing 702HP geomobile satellites in the MEXSAT series, Centenario and Morelos II, are scheduled for delivery in 2013 and 2014 respectively and will be constructed solely by Boeing.

Bicentenario is positioned at 1,140° West Longitude and has an expected service life of 15 years. It was given the name Bicentenario to mark the anniversary of Mexico’s independence from Spain.

The satellite has been designed to provide mobile, voice and data services for both military and civil activities and assist in humanitarian efforts such as disaster relief, telemedicine, rural education, government agency operations and emergency services.

It will provide services to Mexico and surrounding waters, including the Gulf of Mexico and Pacific Ocean.

Ariane 5 is a heavy-load launcher, designed to put commercial satellites into geo-stationary orbits at low-cost.

The Bicentenario Geosynchronous Earth Orbit (GEO) communications satellite generates around 3.5kW of payload power and has a launch mass of 2,900kg.

It is powered by solar arrays with a total capacity of 14kW, comprising three panels and each using Ulyra Triple Junction (UTJ) gallium arsenide solar cells. It is also powered by two Li-ion battery packs.

MEXSAT Bicentenario uses the GEOStar-2 satellite bus built by Orbital Sciences. The satellite bus is capable of withstanding extreme environments and is made of a modular structure, with a payload mass of 500kg and a dry mass of up to 1,500kg.

The bus has been designed for a lifespan of 15 years and is driven by Li-ion batteries and solar arrays comprising Multi-junction GaAs cells. It can provide 5.55kW of power.

The satellite was launched with Skynet 5D, the fourth satellite in the Skynet 5 series built by Astrium, aboard an Ariane 5 ECA rocket.

The launcher measures approximately 53m in height and 5.4m in diameter and has a double launch liftoff mass of 780t, with and a payload mass of 10mt to geostationary transfer orbit (GTO). The launcher applies the ESC-A cryogenic upper-stage powered by an HM7B engine.

It is an improvised version of Ariane 5 Generic launcher, with the upper segment of its boosters carrying 10% more propellant. It includes a new nozzle, a Vulcain 2 engine, a tank with lowered bulkhead, and strengthened forward skirt and thrust frame structures.

"The first ground control station at Iztapalapa in Mexico began operations in November 2012."

The first ground control station at Iztapalapa in Mexico began operations in November 2012.

Command and control ground equipment, including the software, training and operational documentation for the first satellite were provided by Orbital Sciences.