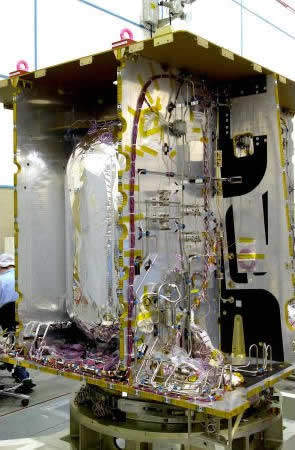 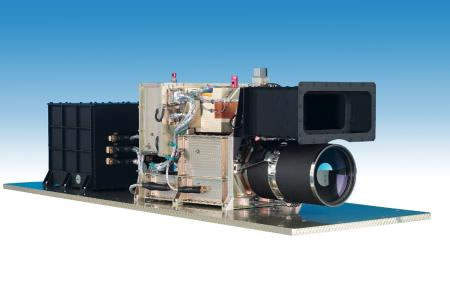 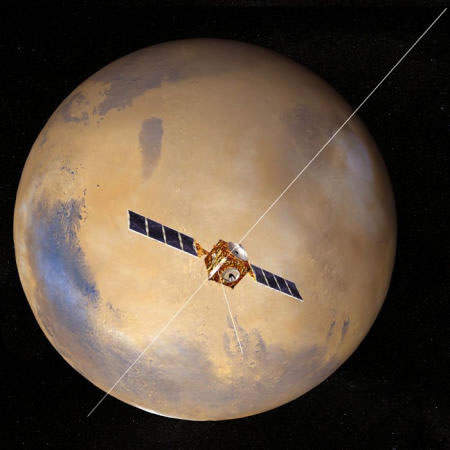 Mars Express in orbit around the Red Planet. Courtesy of the European Space Agency, © ESA 2001. 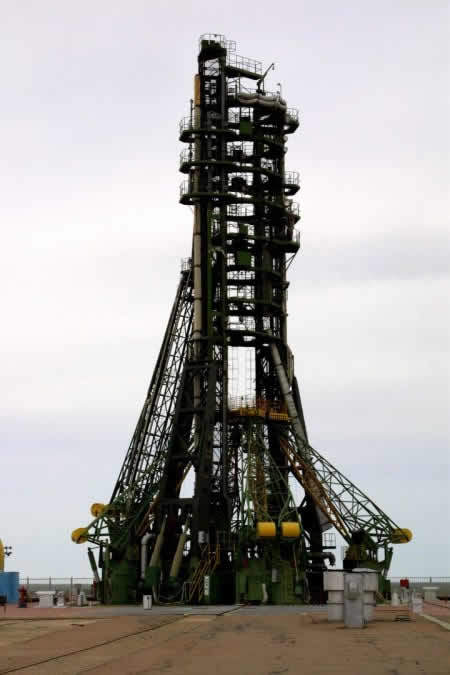 Mars Express will take off from the launch platform at the Baikonur cosmodrome. Courtesy of the European Space Agency, © ESA 2001. 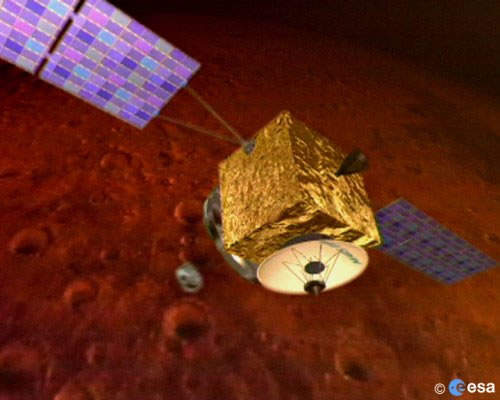 The spacecraft's electrical systems are powered by two adjustable solar panels that will be deployed shortly after the launcher housing has separated itself from Mars Express. Courtesy of the European Space Agency, © ESA 2001.

Mars Express is ESA’s Mars mission and also the name of the spacecraft that will transport the Beagle 2 Mars lander and act as an orbiting probe and telecommunications relay satellite for Beagle 2 and other landers due to land on the Red Planet between 2003 and 2007. The mission’s main objectives are to deposit the lander on the surface and search for sub-surface water from orbit. The spacecraft contains a range of remote sensing scientific instruments to collect data concerning the planet’s atmosphere, structure and geology.

The launch window opens on 1 June 2003 and lasts for eleven days, during which a Soyuz Fregat launcher will begin the journey to Mars which should be completed by December.

The instruments onboard Mars Express include a stereoscopic camera from Germany, a geological mapping device from France and an atmospheric sounder from Italy. The radar instrument that will search for water at depths of a few kilometres below the surface is being built jointly between Italy and the Jet Propulsion Laboratory in California. The Beagle 2 landing craft is being designed and built in the UK.

Upon arrival at the Red Planet the Beagle 2 will separate from the orbiter before the spacecraft begins manoeuvres to place itself into a Martian polar orbit. The planned orbit will provide periods of daytime observation for optical instruments and periods of nighttime observation (at roughly six-monthly intervals) for radar instruments. One orbit will take 6.7 hours and Mars Express will come to within 250km of the surface from a high point of 11,583km. This orbit will provide differing heights from which the instruments can take measurements at different resolutions and scales.

At the pericentre of the orbit, Mars Express will face its high gain antenna towards the planet to receive data from Beagle 2 but when further away the antenna will point towards Earth for communication with the ground stations.

The majority of the power needed by Mars Express to get to Mars will be provided by the Soyuz Fregat launcher which will place it on the correct trajectory for the Red Planet after leaving Earth’s atmosphere. On-board propulsion systems are to be used solely for achieving the correct Mars orbit.

The main engine is attached to the underside of the spacecraft bus and uses a mixture of two propellants, each contained in a 267l tank, that can provide a force of 400N.

Mars Express will also be able to make corrections to its trajectory en route to Mars by firing two or more of its eight 10N attitude thrusters which are fuelled by the same mixture as the main engine.

Mars Express must maintain a pointing accuracy of 0.15° in order to communicate with Earth and conduct its experiments. Two star trackers, two coarse sun sensors and three laser gyros allow the spacecraft to know exactly where it is and in what direction it is pointing. The spacecraft can then make adjustments to its orientation by changing the rotation of spinning reaction wheels attached to the bus.

The spacecraft’s electrical systems are powered by two adjustable solar panels that will be deployed shortly after the launcher housing has separated itself from Mars Express. With a surface area of 11.42m2, they will be able to provide 650W at the furthest point they will reach from the sun, which is more than enough to supply the systems’ maximum demand of 500W.

1,400 eclipses lasting anything up to 90 minutes will occur throughout the mission’s lifetime so the solar panels will also charge up a lithium-ion battery for power supply during these times.

Attached to the spacecraft bus is a 1.8m diameter high gain antenna for two-way communications with Earth from long distances and a 40cm long low gain aerial for short distance communication.

The high gain antenna will face Mars for approx. six hours of every 7.5 hour orbit so that the on-board sensors can make observations. When facing Earth, though, it will transmit data from on-board experiments, status updates and also information collected from Beagle 2. This will all be relayed to Earth at a rate of up to 230kbps in the X-band (7.1GHz).