2 or 3 (pilot, navigator and onboard operator) 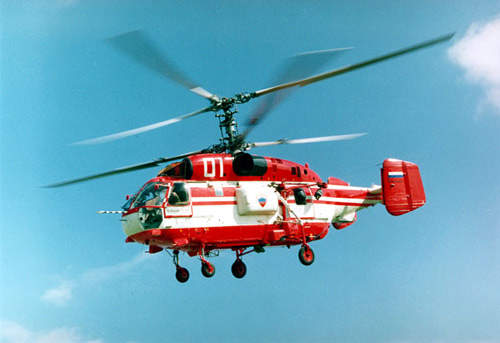 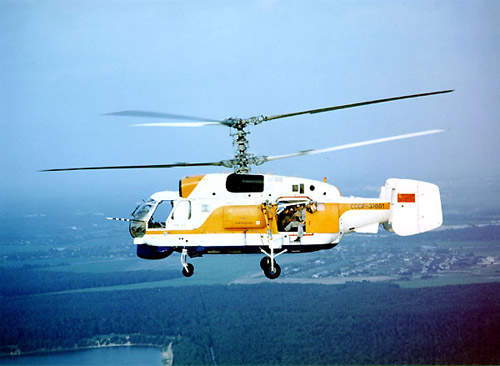 Special variants have also been built: the Ka-32A1 and Ka-32A11BC for fire-fighting and the Ka-32A2 for airborne police operations. 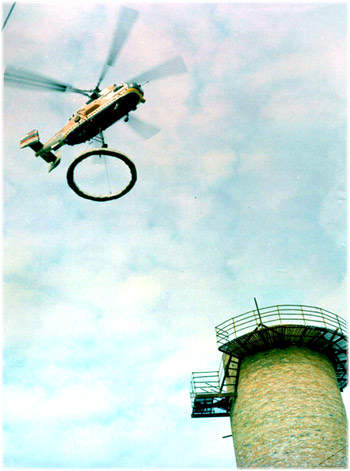 One of the Ka-32's main roles is as a flying crane for building construction. 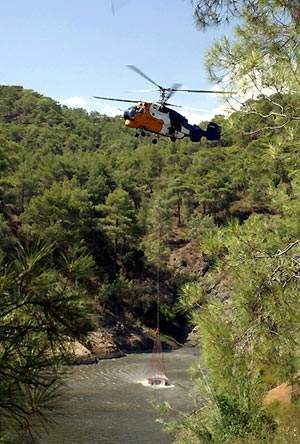 Ka-32 being used for firefighting. It has an external water tank with a 5,000l capacity. 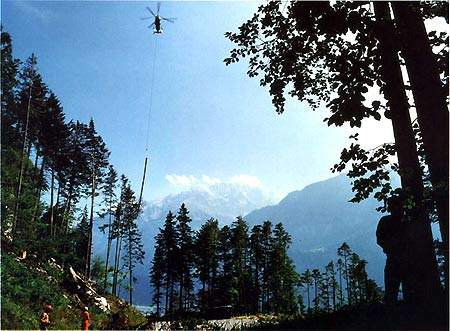 The helicopter is in service with Vancouver Island Helicopters of Canada, for logging operations. 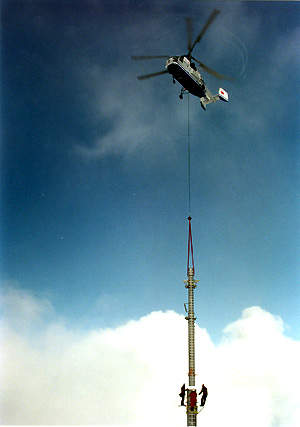 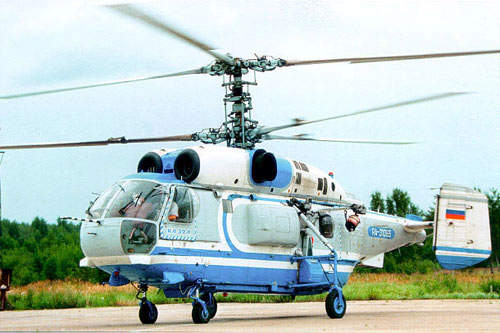 The coaxial rotor has two three-bladed all-composite rotors. which can be folded for compact storage. 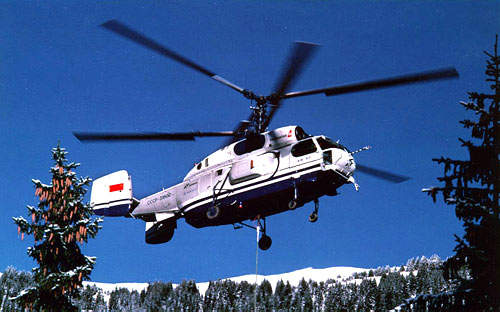 The helicopter can transport bulky cargo up to 5t, carried on an external sling.

The Kamov Ka-32A is an autonomous high-power-to-weight-ratio compact air transporter that can operate independently of ground support. The main roles of the Ka-32A civil helicopter are as passenger and cargo transport, a flying crane for building construction, transport for bulky cargo up to 5t carried on an external sling, logging, search and rescue, medical and emergency evacuation, loading and unloading ships at sea and offshore operations.

The helicopters have been used for the installation of power transmission lines and cable railway towers at hotels for the mountain ski holiday industry.

The Ka-32 is based on the Ka-27 (Helix) naval helicopter. First flight of the Ka-32A civil helicopter took place in 1990. Special variants have also been built: the Ka-32A1 and Ka-32A11BC for fire-fighting, and the Ka-32A2 for airborne police and federal operations. The Ka-32A11BC obtained European Aviation Safety Agency (EASA) certification in October 2009. The certification will facilitate the helicopter to fly in the skies of European Union (EU) countries.

Over 140 Ka-32 family helicopters have been produced and the helicopter is in service with operators in Russia (Ministry of Emergency Situations, Chief Department of Home Affairs of the City of Moscow), Canada (Vancouver Island Helicopters for logging), Germany (Helog), Switzerland (HeliSwiss), Taiwan, Tenerife (PANH for firefighting), Papua New Guinea (Heli Niugini for offshore operations), Myanmar, South Korea and a number of other countries.

The helicopter construction, largely of titanium and composites, is highly corrosion resistant and therefore suitable for maritime roles.

The Ka-32A has a contrarotating coaxial rotor rather than a main rotor and tail rotor. The coaxial rotor has two three-bladed rotors of diameter 15.9m. The blades are all-composite and are folded for compact storage when the helicopter is based on a ship deck.

“Over 140 Ka-32 family helicopters have been produced.”

The co-axial contrarotating rotors allow very controlled, stable and precise flight, allowing the helicopter to carry loads with minimum deviation from the designated location, for example in narrow canyons and to allow precise placement of heavy loads for construction. The absence of the tail rotor contributes to the safety of the helicopter in manoeuvring near obstacles and in decreased sensitivity to changes in wind force and direction.

The Ka-32 has the capability to lift and transport 5t cargo loads on the external sling.

The flight deck accommodates the pilot on the portside and navigator on the starboard side. A seat for a third crew member, such as a rescue hoist operator or a loadmaster, is installed behind the navigator. The cockpit and cabin are air-conditioned. The windscreen is fitted with an alcohol de-icing system. The crew can access the cabin from the flight deck.

The flight deck is equipped with a three-axis autopilot with an electromechanical flight director. The autopilot operates in automatic approach mode and can hover at a predetermined height over the designated landing area.

The main cabin can be configured for transport of up to 16 passengers or freight. Access to the main cabin is by the sliding door on the port side just aft of the main landing gear. An emergency door is installed on the starboard side of the cabin.

The two Klimov TV3-117MA turboshaft engines are installed side-by-side above the main cabin and forward of the rotor drive. The engines are rated at 1,633kW each

The primary role of the Ka-32A2 police helicopter is in the provision of air mobility for law enforcement and special groups to counter criminal and terrorist activity. The roles include the search and detection of criminal groups, landing of law enforcement groups and special forces in an area of operations, suppression of hostilities and maintaining surveillance and presence in the period of normalisation after hostilities.

The police helicopter, which can accommodate 12 police or soldiers, is equipped with mission communications equipment, external loudspeakers and an L2AG floodlight installed beneath the nose. The cabin is equipped for abseiling from both the port and starboard sides. Pintle mounted guns can be installed in the port side rear main cabin door and also in the starboard side rear window position.

The helicopter is armour protected. Self-sealing fuel tanks give protection against fuel loss and explosion in the event of a major impact.

The helicopter is fitted with a four-wheel-type landing gear. It features oleo pneumatic shock absorbers and castoring nose wheels. The dimension of the main wheel tyres and nose wheel tyres are 600mm×180mm and 400mm×150mm.