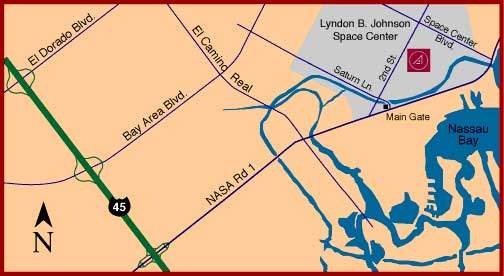 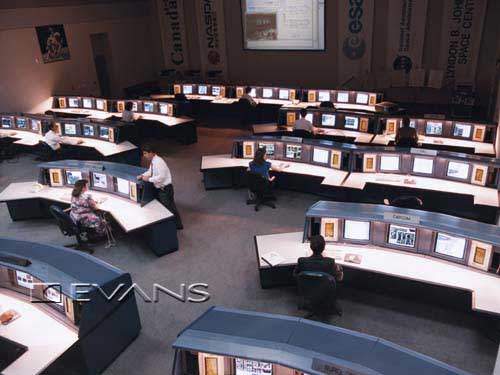 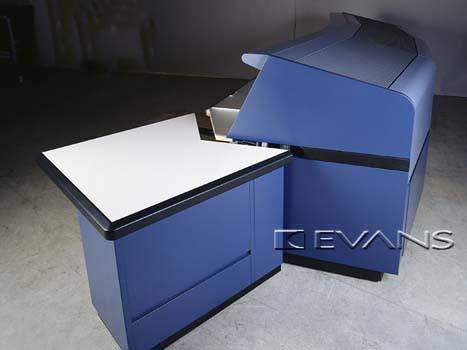 Desk module at the Mission Control Center in Houston. 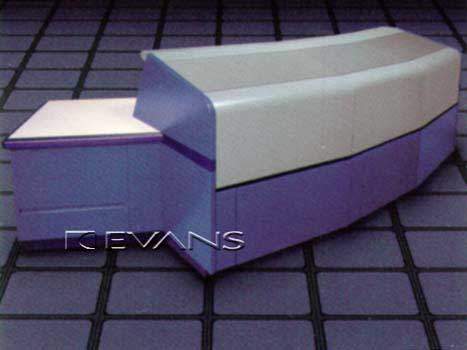 Curved rear-panel and open top grill at the MCC. 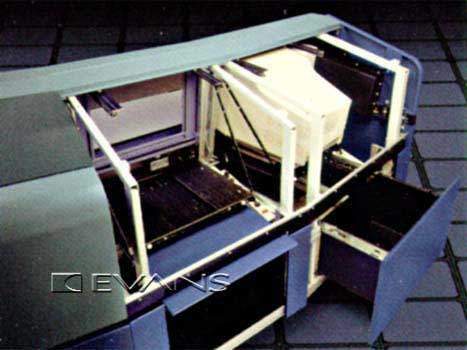 A rear pull-out storage drawer accommodated by the console system at the new MCC in Houston.

For the first time since NASA’s original Mission Control Center was established in 1965, flight controllers worked out of the new facility for portions of the STS-70 Space Shuttle mission. The new MCC was developed at a cost of about $250 million. The facility is located in Houston, Texas, USA.

The old Mission Control Center, built in the 1960s, employed approximately 80 people. They were required around the clock during shuttle missions to operate the equipment and cary out maintenance on the MCC. For such maintenance, NASA had to keep specialists on hand who knew the old equipment in detail because similar technology was long ago purged from the commercial world.

The new centre eliminates the uniqueness of the NASA equipment and the massive hardware orientation of the old Mission Control Center. It replaces it with a modular, software-oriented design that uses standard, commercially available equipment. The MCC’s new design offers unprecedented flexibility in flight control operations, allowing the facility to be changed from controlling a Space Shuttle to controlling any other spacecraft. The commercially available equipment and up-to-date technology used in the new MCC will greatly reduce maintenance costs for the facility as well.

During STS-70 mission, tracking and data relay satellite deploy and entry operations were conducted from the old flight control room, but after the completion of the deploy, the flight control team moved to the new MCC for the remaining on-orbit operations.

The new MCC uses workstations interconnected via a local area network, doing away with the older mainframe approach and bringing it in line with the systems most commonly in use today. Manufacturers can maintain the equipment on a modular basis, pulling out and replacing entire workstations rather than intricate parts, a change that will reduce the maintenance personnel required for Mission Control by about 180 positions as the current control centre is phased out.

In the new MCC, a total of 197 workstations can be used to control both the Space Shuttle in flight and the International Space Station launched in 1997. In the past, 204 workstations were required for shuttle flight operations alone. The number of equipment racks needed in the new MCC is half the amount in the old Mission Control. The networks in the new MCC are linked by 125,000 feet of fibre optic cable, making it the world’s largest fibre data distributed interface network.

The majority of software packages used in the new MCC are standard, commercially available products as well. Only a “thin layer” of software that is inherently required to accomplish tasks unique to shuttle flight control has been developed by NASA. The software also makes use of intelligent systems to assist flight controllers in monitoring the health of the shuttle, although the flight controllers themselves are, as always, the primary mechanism for detection of malfunctions and attempts to resolve them.

The White Flight Control Room is located in a new wing of the MCC, down the hall from the current Mission Control. The Multi-Purpose Support Rooms, back rooms that support the various flight control positions in the old Mission Control, also will move to a room adjacent to the White Room.