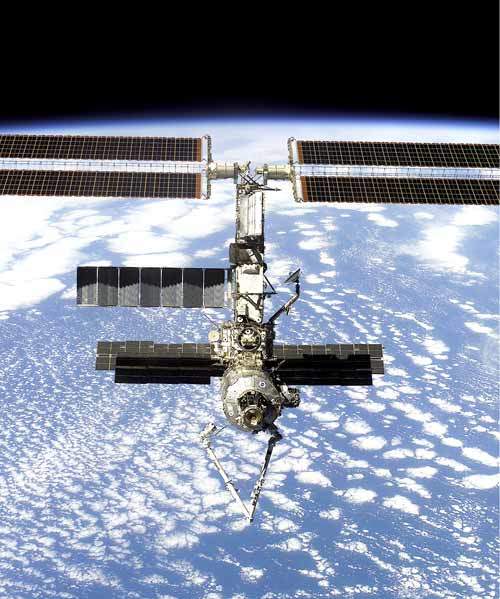 The International Space Station (ISS) is the largest international co-operative project in history. 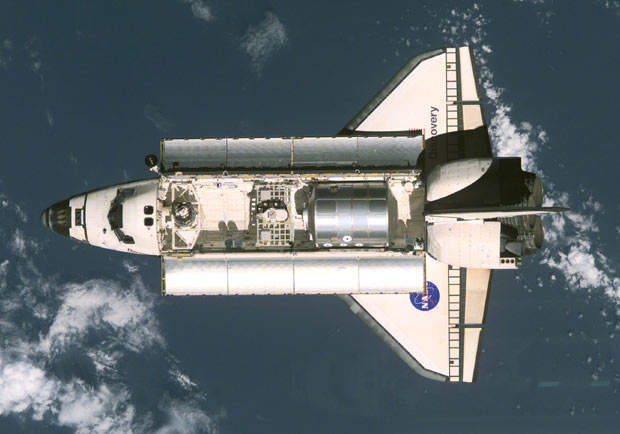 The $100 billion cost of constructing the ISS is being shouldered by the USA, Russia, Japan, Europe, Canada, Italy and Brazil. 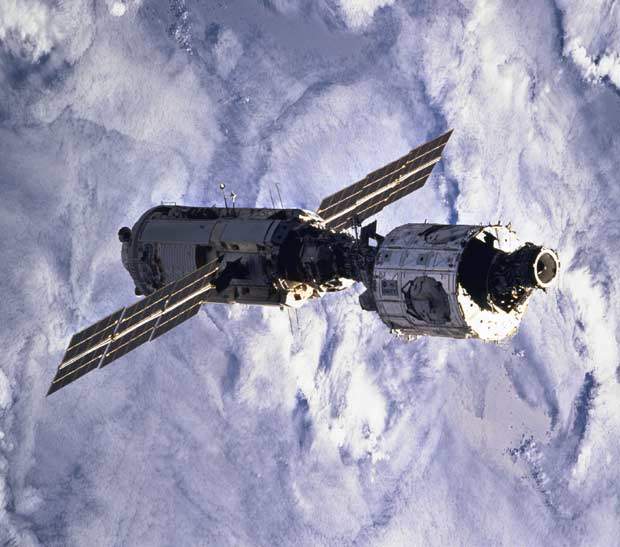 The Zarya and Unity modules, shortly after having been joined and released from Endeavour. 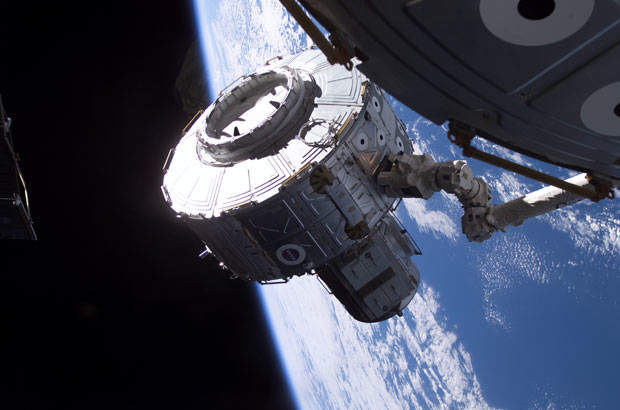 Quest airlock in the process of being installed onto the starboard side of Unity Node 1 using the Space Station Remote Manipulator System (SSRMS). 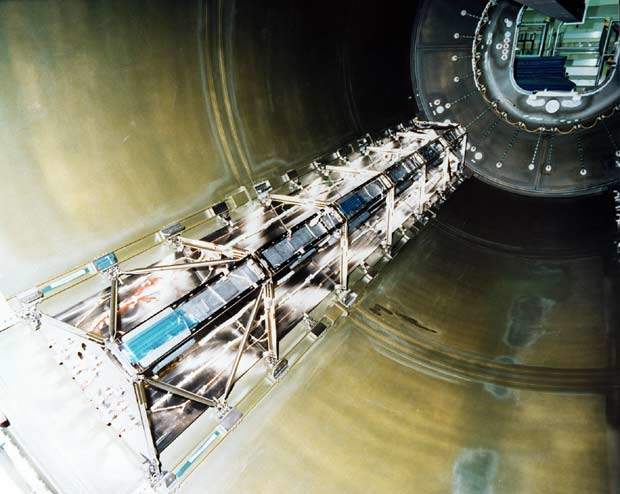 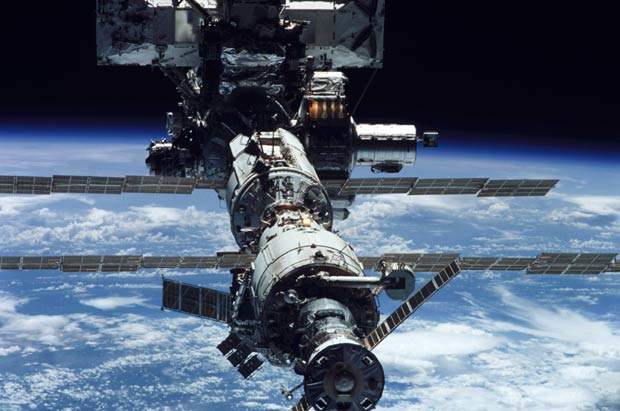 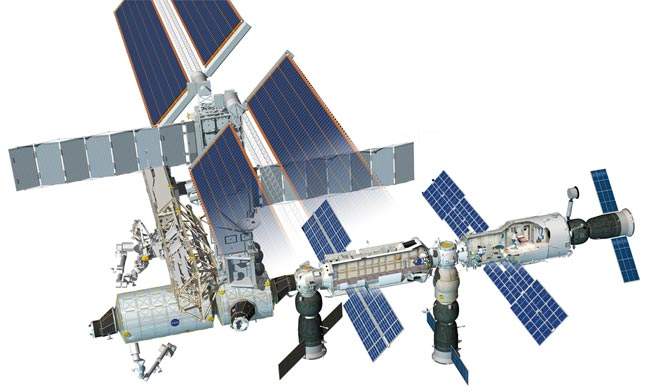 Cutaway diagram of the completed ISS. 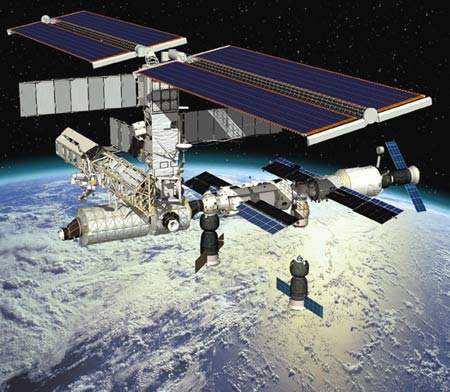 Artist's impression of the completed ISS.

The International Space Station (ISS), once completed, will be the greatest laboratory available. 1,200m³ of pressurised space will be used by up to seven astronauts to perform experiments in an environment free from gravity.

The ISS is being built by an international partnership of countries and space agencies, each contributing various modules from which the station will finally be completed. The partners are USA, Russia, ESA (European Space Agency), Japan and Canada. In addition, Brazil and Italy are contributing equipment through agreements with the USA.

The ISS is being built in stages. Work began in 1998 to place the first modules of the 455t station into orbit 400km above the Earth. The first components were the Zarya functional and cargo module and the Unity connecting module, which were successfully joined in December 1998.

Since then, nearly 20 launches have propelled other modules and components into orbit to the station. These include the Zvezda service module (Russia), the Destiny laboratory (US) and the Photovoltaic module (US). Aside from the main modules, every part of the station’s hardware that will require maintenance or replacement has been designed as an Orbital Replacement Unit (ORU) which allow simple removal and replacement during orbit.

The first solar arrays on the ISS were part of the Zarya module and they were not supplemented until 2001 when the next photovoltaic module was added to the station. Upon completion the ISS will have eight solar arrays, each 112ft x 39ft, providing a total of 110kW.

The power management and distribution subsystem disburses power at 160VDC around the station through a series of switches. These switches have built-in microprocessors that are controlled by software and are connected to a computer network running throughout the station. To meet operational requirements, DC-DC converter units step down and condition the voltage from to 120V to form a secondary power system to service the loads. The converters also isolate the secondary system from the primary system and maintain uniform power quality throughout the station.

Since the ISS is hidden from the Sun for up to 36 minutes of each 92-minute orbit, it uses rechargeable nickel-hydrogen batteries to maintain electrical energy supply. 38 cells are packaged together in series with monitoring instrumentation (temperature and pressure) inside an ORU enclosure.

The Destiny Lab was launched on 7 February 2001 and is an 8.5m-long, cylindrical, pressurised module. It has a capacity of 24 rack locations and will accommodate 13 laboratory racks.

Kibo is Japan’s first manned space facility and will allow up to four astronauts to perform scientific experiments. Kibo consists of four components: two experimental facilities (one pressurised and one exposed), logistics modules attached to each of them and a manipulator arm to be used for experiments and ORU changeout tasks.

The Columbus Laboratory is a 6.8m-long cylinder that contains 75m³ of internal space. Broadband video and data links will allow scientists on Earth to control the mini laboratories that will be housed on International Standard Payload Racks. The module can accommodate ten such racks and has a further four external mounting points that will allow experiments to be conducted in the vacuum of space. It is due to be launched in October 2004.

The Italian MPLMs (Leonardo, Donatello and Raffaello) are unmanned reusable modules that are designed to bring new laboratory racks to the science modules and carry away old ones. They are removed from the Space Shuttle after it has docked, have their contents changed and are then replaced for their return to Earth.

In order to function as both station modules and cargo transports, the MPLMs include components that provide life support, fire detection and suppression, electrical distribution and computer functions. Eventually, the MPLM will carry refrigerators or freezers for transporting experiment samples and food to and from the station.

The first crew of three arrived at the ISS in November 2000, since when the station has been permanently inhabited. At the same time as the crew arrived, a Soyuz vehicle was docked to the ISS as the crew rescue vehicle. Its maximum capacity of three is the major limiting factor in the number of people that the ISS can currently support.

In order to bring its population up to seven, the station was eventually to be fitted with a dedicated crew return vehicle. However, cuts in NASA funding have crushed that project and the only other US equivalent is the orbital spaceplane which will not be ready until 2010 at the earliest. The most likely situation will be that two Soyuz capsules are docked to the station, allowing emergency evacuation for six. Since three people are required just to run the station, this is the only short-term solution that will allow meaningful research to be carried out.