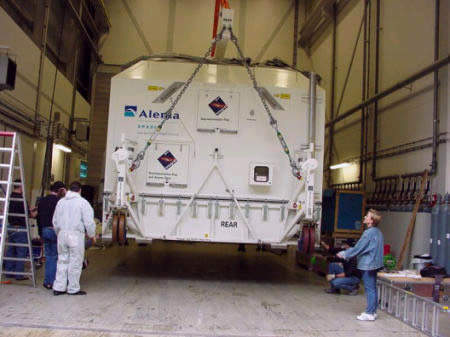 The Integral spacecraft was delivered in July 2001. 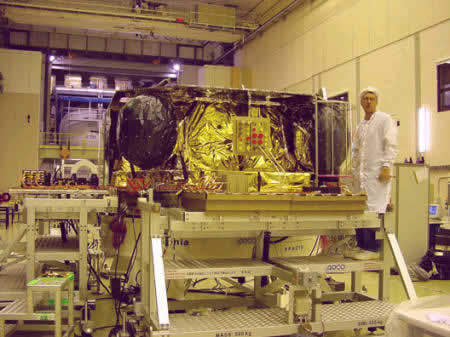 The Integral service module being prepared for Electromagnetic Compatibility tests. 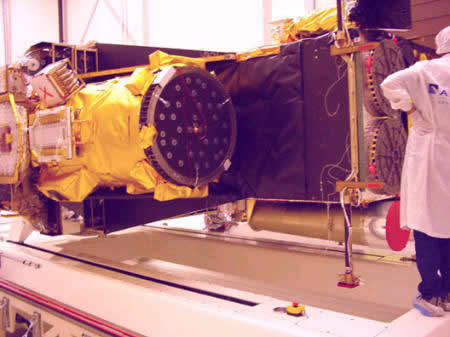 The payload module with the spectrometer SPI. 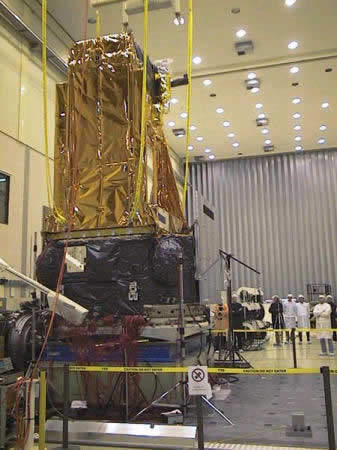 The Integral spacecraft during one of the many vibration tests at ESTEC. 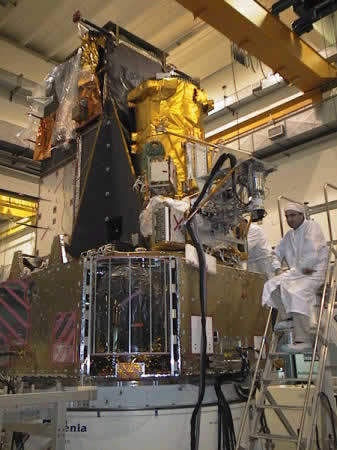 The Integral spacecraft in Alenia Spazio clean-room being prepared for journey to ESTEC. 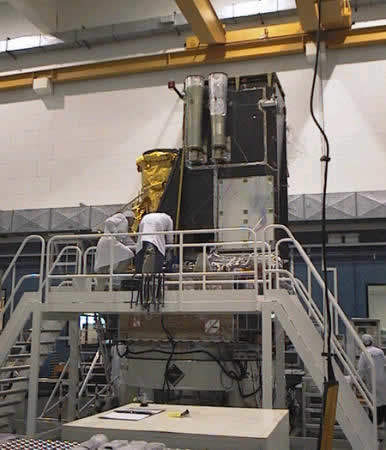 Integral spacecraft at Alenia before trip to the Netherlands, showing on its near side the two star trackers

Initially scheduled to end on 16 December 2010, the Integral mission was extended till 31 December 2012 by the ESA’s Science Programme Committee in November 2007.

The Integral spacecraft has two gamma ray detectors: an imager and a spectrometer. Two monitor instruments support these instruments: an X-ray monitor and an optical camera. The operation is controlled from the European Space Operations Centre (ESOC) in Darmstadt, Germany.

Integral captures gamma rays that emanate from supernova emissions and radioactive elements. It also studies neutron stars. It detects, on an average, one gamma ray burst a month. It has provided the first map of 511keV emission from electron-positron annihilation and measured the line emission of radioactive isotopes 26Al at 1809keV.

The European Space Operations Centre (ESOC) in Darmstadt, Germany, is the mission operations centre where the raw data is gathered and turned into physical units. This data is distributed to the observer and archived for later use by the scientific community. The satellite is tracked from ground stations in Redu in Belgium (ESA) and Goldstone in the US (Nasa).

The satellite goes into an eccentric 72-hour orbit around the Earth at an altitude of 10,000km-153,000km outside Earth’s radiation belts to minimise background radiation effects. The inclination is 51.6°.

The spacecraft consists of a service module and a payload module. The service module provides the power generation, conditioning and control, stabilisation and ground-satellite link and the payload module hosts the instruments. The interface between the two modules was designed to be as simple as possible. This approach allows working in parallel on the service and payload modules, thereby reducing the time needed for developing, assembling and testing the spacecraft.

The orbit, power and data rates of Integral are very similar to ESA’s XMM-Newton project, so the service module is a rebuild of the service module for that project. Power is generated by a deployable, double wing solar array and the energy is stored in two nickel-cadmium batteries. Hydrazine thrusters control the spacecraft. The new module varies from XMM-Newton in that the tanks are not internal and contain a diaphragm separating the liquid propellant from the pressurisation gas.

The payload module consists of an equipment platform accommodating the detector assemblies and an empty box supporting the “upper floor” at a height of about 4m. The so-called coded masks, which remove nearly all background radiation are also installed there. The backbone supporting the instruments in the payload module is an H-shaped structure. It is made of strong and stiff composite material and ensures that the instruments will have the structural stability necessary for their accurate pointing. The satellite is 5m high and has a diameter of 3.7m. It weighs 4.7t.

Instruments on the Integral satellite

The four instruments on the Integral satellite are co-aligned and will observe the same region of the sky simultaneously. This allows the clear identification of gamma-ray sources, a key feature in studying high-energy processes in the violent universe.

The Spectrometer will gauge gamma ray energies with exceptional precision. It will be 100 times more sensitive than the previous high-spectral-resolution space instruments.

It will perform spectral analysis of gamma ray point sources and extended regions over an energy range between 20keV and 8MeV with an unprecedented energy resolution of 2keV at 1MeV. This will be achieved by 19 hexagonal high-purity Germanium detectors.

The lead contractor responsible for the design, integration and testing of the satellite was Italy-based Alenia Aerospazio. Components for different parts of the spacecraft were manufactured by 28 companies from all over Europe. The total cost of the project, excluding design and development of the servicing module, which is common with XMM-Newton, is €353m.