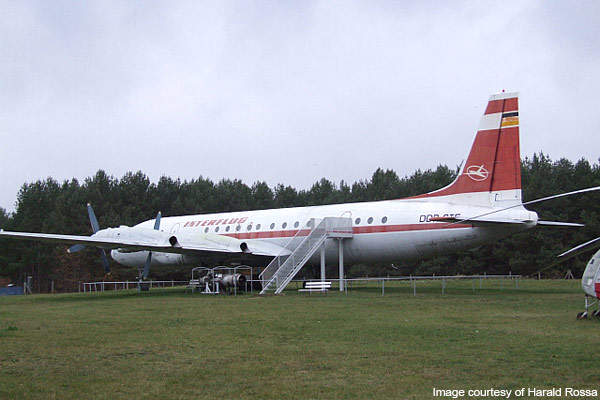 An IL-18 displayed at Borkheide museum in Germany.

An IL-18 showcased at Sheremetyevo International Airport in Moscow.

An IL-18 featured at Sinsheim, Germany. 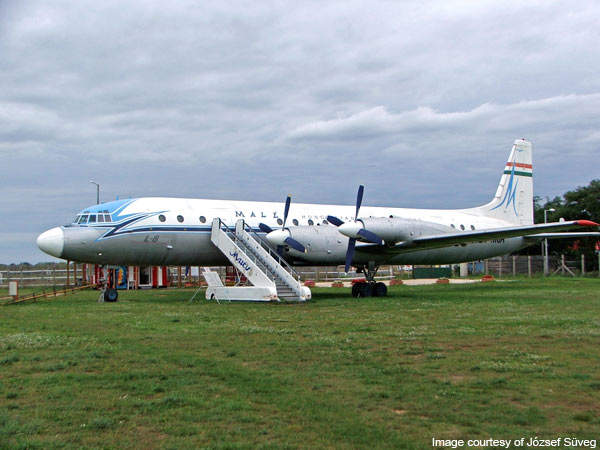 The IL-18, a medium-range passenger jetliner, is manufactured by Ilyushin Aviation Complex, Russia and its NATO reporting name is COOT. The maiden flight of the aircraft took place on 4 July 1957 and it entered into service in 1959.

The IL-18 is one of the most popular aircraft in Russia as well as other countries worldwide. It is capable of accommodating 100 passengers. The aircraft, currently being operated from Sheremetevo Airport located in Moscow, has achieved an aircraft operational certificate.

The aircraft was developed to meet the operational requirements of Aeroflot and Air Koryo. During 1958 and 1990, it broke 25 world records. Around 125 IL-18 planes were purchased by 17 foreign air liners.

The Kuznetsov NK-4 or Ivchenko AI-20 turboprop engine is incorporated at the fuselage section of the IL-18A variant. The IL-18B features only 84 passenger seats.

The IL-18V, an Aeroflot version, entered into service in 1961 and has the capacity to accommodate 80 to 100 passengers. Four Ivchenko AI-20K turboprop engines are installed in the fuselage section of the variant.

“The IL-18 is one of the most popular aircraft in Russia.”

The IL-18I can accommodate 122 passengers and is powered by Ivchenko AI-20M turboprop engines.

An extra fuel tank fitted at the fuselage section of the IL-18D enhances the aircraft’s range. Four 3,169kW (4,250hp) Ivchenko AI-20M turboprop engines are incorporated in the variant.

The IL-18E varies from the IL-18D as the former aircraft is not fitted with an extra fuel tank. An Aeroflot aircraft version, the IL-18T was transformed into a cargo transport aircraft.

The IL-18 was developed in two models. The first model was fitted with propellers in 1946, however the programme was deserted after performing flight tests for a year. The second model has similar features of Lockheed L-188 Electra and Bristol Britannia, and is powered by four turboprop engines.

“The IL-18 accommodates five crew, including a pilot, co-pilot and flight engineer.”

The IL-18 became more popular in the Union of Soviet Socialist Republics (USSR) because of the possibility to increase the number of passenger seats and enhance the flight range.

The aircraft features two glass windows, blisters and three downward open windows for optical devices. Four hardpoints are mounted on the wings of the aircraft for deploying PMS sensors. Other systems incorporated in the aircraft encompass inlets for air sampling, aboard system for ground power supply, a system for shooting out squib, a system for seeding solid carbon dioxide, and cement and acquisition systems.

The flight deck of the IL-18 accommodates five crew, including a pilot, co-pilot, flight engineer, navigator and cabin attendant.

The avionics installed in the aircraft includes an inertial navigation system (INS), global positioning system (GPS) and air and temperature signal system. The INS helps to monitor the position and velocity of the aircraft without any external devices (GPS receiver or a human operator). The GPS receiver was designed and developed by the US Department of Defense (DoD) for defence operations.

The aircraft is powered by four AI-20 M turboprop engines, which each produce a maximum power output of 3,169kW (4,250hp). The engine was designed and developed by Ivchenko Progress. The engine meets the requirements of the ICAO standards.

“The aircraft is powered by four AI-20 M turboprop engines.”

The lifespan of the engine is 22,000 hours and its propeller diameter is 4.5m. The engines are fitted in the fuselage section of the aircraft, the diameter of which is 3.5m.