Howard 500 demonstrating at Coventry airport in 2000. 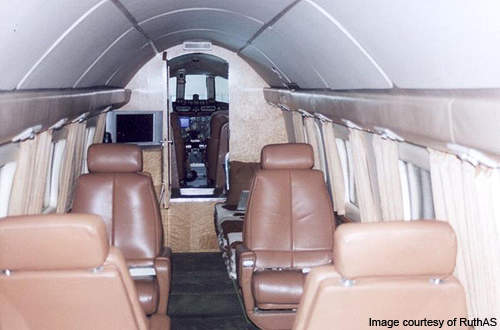 The interior of the Howard 500. 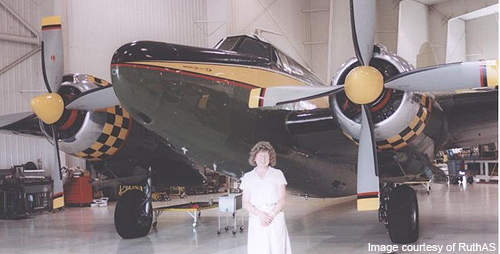 The Operational Howard 500 of the Herrick Collection, based near Minneapolis in 2008.

The Howard 500 is a twin engine propeller executive transport aircraft manufactured by Howard Aero, Texas in the US in the early 1960s. It was designed by Dee Howard and Ed Swearingen. It is also the final radial-type engine passenger transport aircraft ever built.

In the 1950s and 1960s, Howard Aero was re-constructing military aircraft (Lockheed Lodestars and Lockheed Venturas) for the executive market. The Howard 500 is similar to these aircraft with new design and new fuselage.

The first flight of the prototype was in September 1959. The certification was achieved in February 1963.

The Howard 500 was put into service in 1963. The aircraft received the Contemporary Grand Champion Lindy Award at the EAA Oshkosh Convention in 1997.

The firms that operated the aircraft include Republic Steel, Green Construction based in Indiana, Pacific Petroleum based in Canada, Northern Natural Gas and US Metal Refining Company. A total of 17 Howard 500s were manufactured and produced in the beginning and a further eight aircraft were transformed from earlier PV-2 aircraft to nearly the same standard.

Just two aircraft out of the 17 built to full Howard 500 standard remain in the current fleet. One is owned by the US as of 2008. The second Howard 500 was reconstructed in the UK and left Exeter in May 2010 departing to Coventry airport. The aircraft’s last flight before this was in August 2000. Since then it was refurbished at Exeter until its departure to Coventry.

The plane refurbished for enhancements after the Howard N500HP was bought by North Pacific Management Corporation in 1995. The refurbishment included new engines, a complete rewiring of the electrical system and avionics, new brakes, reconstruction of the integral fuel tanks in the wings, and the addition of a refined interior having birds-eye maple woodwork, Connolly leather seats and rare kangaroo hide wall panels.

“The Howard 500 was developed without many alterations in the airframe plan.”

The special features of the aircraft are boosted controls, which are hydraulic aided, modified and advanced avionics, anti-skid brakes, auto-squaring props, lean-back leather seats and a stand-up bathroom with running water.

The rudder boost and elevator boost system in the aircraft assist the pilot in supporting the plane on single engine demos. An AC electrical system is fitted in the plane, providing everything from heated windshields to hot food in the galley.

The nitrogen systems back up the brakes and gear system. The landing gear in the 500 is one of the fastest deploying gears.

The Howard 500 was developed without many alterations in the airframe plan, but changes to the electrical system and hydraulics were made.

The main components of the aircraft were taken straightaway from the Lockheed forebears. The external wing panels were from surplus Venturas and undercarriage framework from Harpoons. Lockheed developed the wing and fuselage jigs which are used as forms for jigs in the Howard 500.

The cabin is comfortable and spacious. It is a fully pressurised 6ft 2in stand-up cabin with Rolls Royce leather seats. The aircraft has low cabin sound levels and the absence of frequency interference creates a comfortable environment, which is a tributary to relaxed conversation. The cabin can accommodate 12 people and has a series of windows that give excellent views for every passenger.

For pressurisation the fuselage is far different from the Ventura aircraft in design. The aircraft wings are designed wet. A differential of 6.75lb was held by the pressurisation system, which was more than any other turboprop aircraft in the industry at that time. The sea level cabin pressure was maintained at up to 16,000ft.

The main feature of the cockpit is IFR and VFR flyable from pilot or co-pilot positions. The multiple pop-up panels are available for one or more displays and a zoom panel for main gauges for easy legibility under any conditions. The clarity is equal to the 2D panel. Night-time readability is also possible with the backlit gauges, which have great legibility during night flights.

The engine fitted in the aircraft is a high-power and light-weight version of the Pratt & Whitney R-2800/CB-17. The engine is rated at 2,500hp with a dual stage compressor and a water injected ADI. The propeller hubs chosen for the Howard 500 were from F4U Corsairs aircraft. The four-blade propellers and spinners were from DC-7s.

The Landing gear is similar to that of PV-2 aircraft, but with some vast modifications such as the airframe bonding.