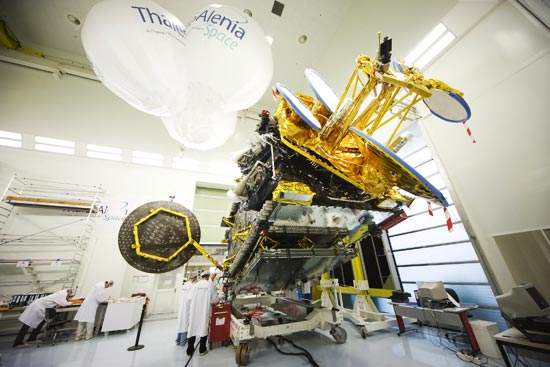 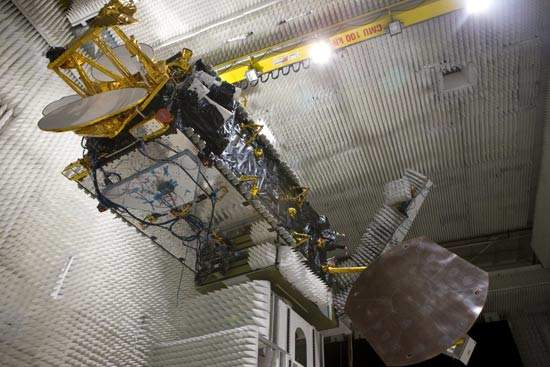 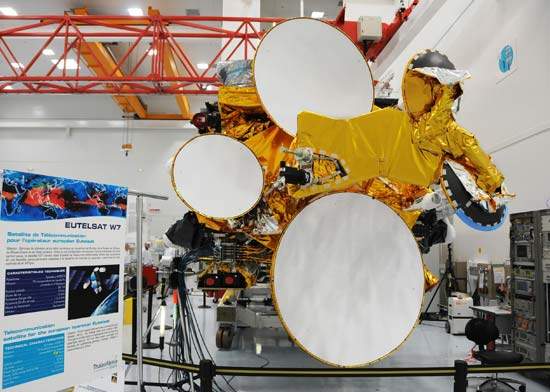 The Earth face of the Eutelsat W7 satellite. 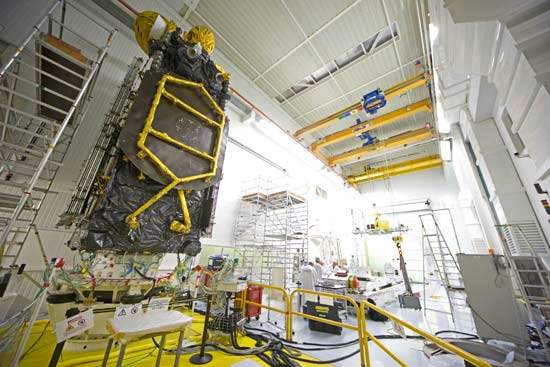 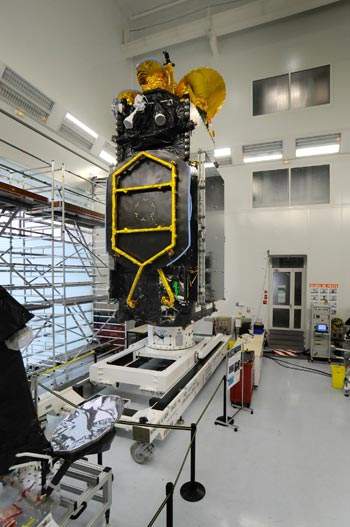 Eutelsat W7 is a telecommunication satellite principally used for providing high-power, direct-to-home (DTH) and digital broadcasting services to more than 450 channels from 36° East. Eutelsat W7, which is part of the W-series, was launched into orbit on 24 November 2009 to replace the existing SESAT 1 satellite launched by Eutelsat on Proton rocket in early 2000.

Since Eutelsat W7’s launch into orbit, the SESAT 1 has continued its commercial service at an alternative location. It is being operated by Eutelsat Communication of France.

It has also replaced the total capacity of SESAT 1 satellite, which assists Europe, North Africa, the Middle East and central Asian regions, adding fresh capacity to South Africa via a high-powered fixed beam, and central Asia through a spot beam that can be changed in orbit.

The satellite was launched through the Spacebus-4000C4 platform on the piggyback of a Proton-M Briz-M vehicle. The apogee motor of the W7 satellite was ignited three times over five days to rotate its orbit and solar panels.

The antennas were installed in October 2009. The W7 satellite entered into service for commercial applications in January 2010 after completion of its in-orbit tests. It has doubled the available resources provided by the SESAT 1.

In January 2010, MultiChoice Africa signed a 15-year contract with Eutelsat to use 20 Ku-band transponders of the W7 satellite to broadcast multi-channel pay-TV across sub-Saharan Africa.

Eutelsat signed a five-year agreement with UPSTAR Comunicacoes in March 2010 to lease five Ku-band transponders on the South African beams of W7 spacecraft. The high power beam of W7 will allow the ZAP pay-TV platform to be broadcast across Angola. UPSTAR Comunicacoes is a joint venture of ZON Multimedia and SOCIP.

ACS Angola signed a five-year lease contract with Eutelsat in April 2010 to increase its utilisation capacity on W7 satellite. The contract will facilitate ACS to expand its commercial services to private and business operators in the energy, financial and manufacturing industries across Angola.

In June 2011, Vizada Networks signed an agreement with Eutelsat to increase its utilisation capacity on the W7 satellite to enhance its internet and data services provided to Europe, North Africa and Middle East. The contract enables Vizada to use the services of W7 until 2014.

Alcatel Alenia Space was awarded a contract by Eutelsat Communications to manufacture and supply the Eutelsat W7 communication satellite in December 2006.

The W7 satellite is manufactured at Cannes Mandelieu Space Centre by Thales Alenia Space. It was designed for a lifespan of 15 years.

The satellite design also offers potential data and voice solutionsfor the specific use of the oil and gas sector in Russia, central Asia and west Africa.

W7 is a digital channel transponded satellite that provides communication capacity, connectivity and flexibility. Around 70 Ku-band transponders installed in the satellite can be connected to five beams – for the European, Russian, African, Middle East and central Asian areas. The satellite also envisages highly efficient fixed and steerable beams principally for DTH applications.

Manufactured by Thales Alenia Space, the satellite bus Spacebus-4000C4 is mainly used for geostationary communication. It was derived from the 3000 series. An altitude and orbit control system with star trackers is installed in the Spacebus-4000C4.

The Spacebus-4000C4 is 5.5m tall. It consumes more than 16kW of power using its solar panels. The satellite bus was used to launch the Canadian satellite Ciel 2, two Eutelsat spacecraft, W2A and W7 satellites on the Proton Briz M.

The name of the launch vehicle was derived from the Proton rocket and Briz M booster stage manufactured by the Khrunichev State Research and Production Space Centre in Russia. The launcher successfully released the W7 satellite into geostationary transfer orbit after nine hours and 12 minutes from take-off from the Baikonur Cosmodrome.

W7 is the sixth satellite to be launched from the ILS Proton rocket. Another satellite, the DirecTV 12 commmunication satellite, was launched on the back of the Proton Briz M launch vehicle for DirecTV on 29 December 2009.

“The W7 satellite is manufactured by Thales Alenia Space.”

The satellite launched into orbit can be controlled by five operational centres in Europe, Russia, Africa, the Middle East and central Asia, using ground equipment hardware and software.

The W7 satellite operating in the Ku-band can be controlled and tracked by a global satellite configuration and control element (GSCCE) using telemetry tracking and command links (TT&C) system.

The TT&C system is primarily used to track and control the satellite when it deviates from its orbit. Communication between the satellite and ground station takes place through the bandwidth allocated to service provider.