Height to Top of Rotorhead

Hover Ceiling out of Ground Effect 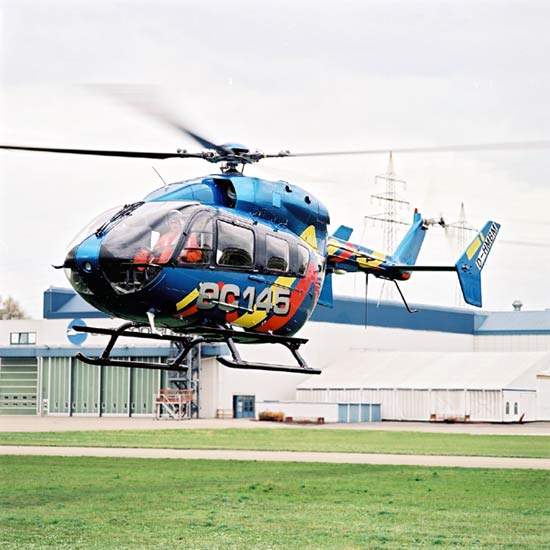 The EC 145 multi-role helicopter has been jointly developed by Eurocopter and Kawasaki Heavy Industries of Japan. 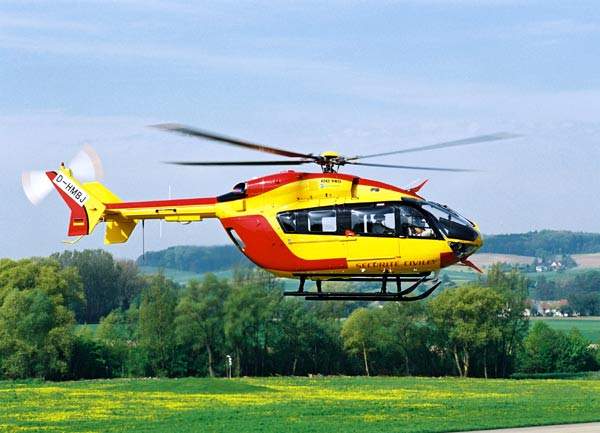 Launch customer for the EC 145 is the S&#233;curit&#233; Civile, the French civil defence and emergency preparedness organisation. 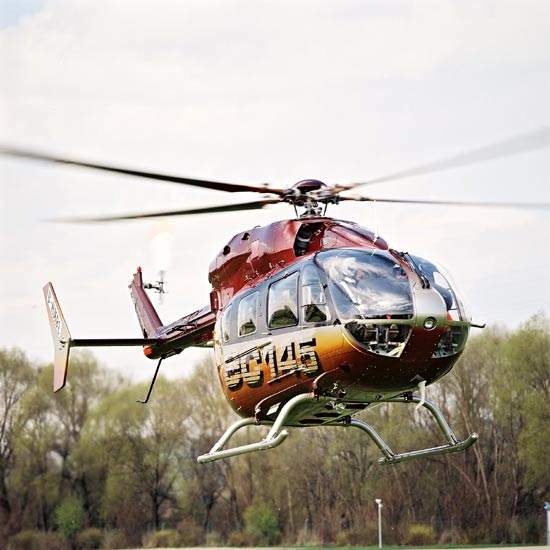 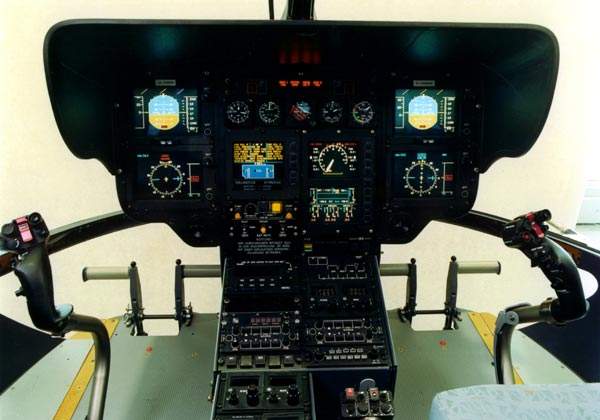 The helicopter is fitted with an all glass Thales Avionics Meghas avionics suite. 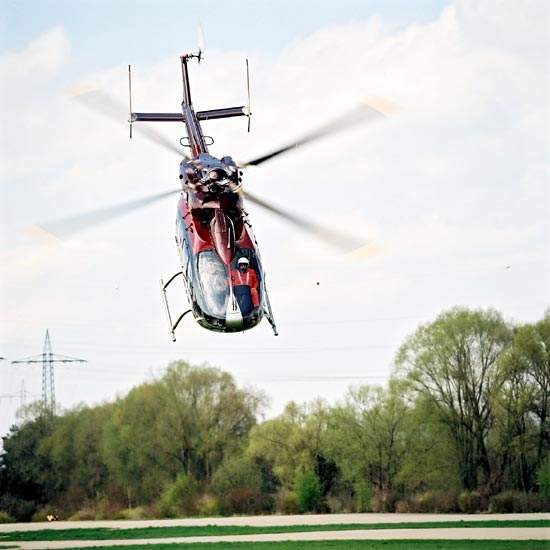 The cabin can be configured for eight passengers in a standard 3+2+3 arrangement or up to 11 passengers for high-density operations. 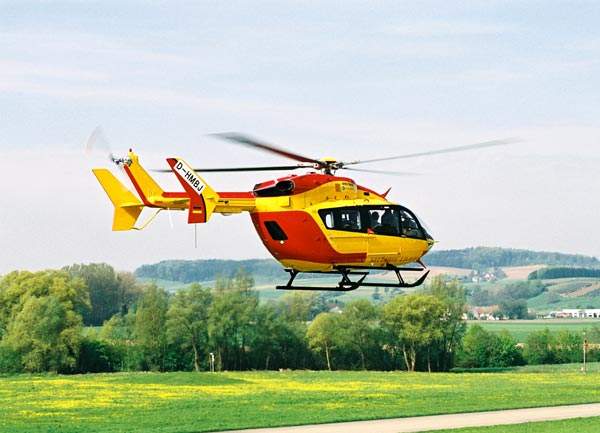 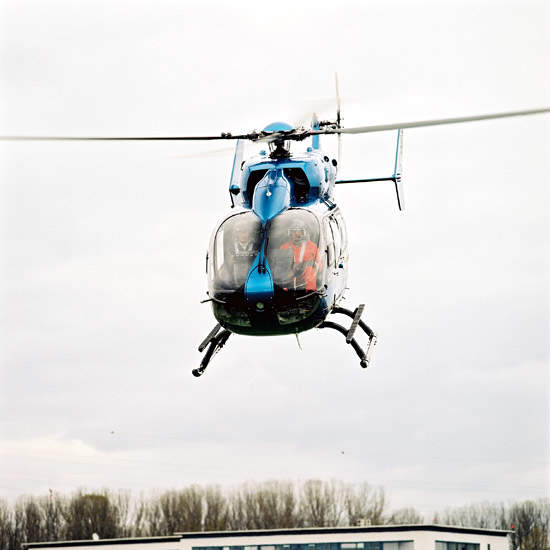 The EC 145 has increased take-off weight and cabin volume, compared to the BK 117 C-1, its predecessor. 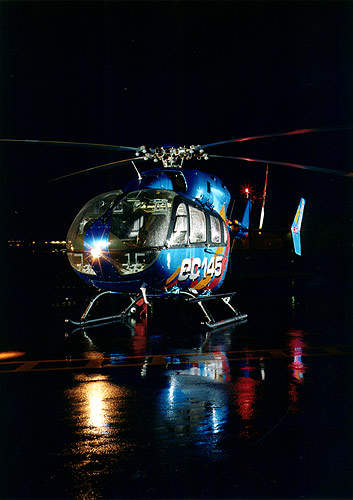 The first EC 145 was delivered to the Sécurité Civile in April 2002 and deliveries were completed in May 2005.

Orders have been received for a total of 95 aircraft, of which 75 have been delivered.

Five helicopters are in service with the REGA air rescue organisation of Switzerland. Other operators include ADAC Air Rescue, Deutsche Rettungsflugwacht (DRF) and the Hesse state police of Germany. In April 2004, the first EC 145 was delivered to a customer in North America, Lee County Emergency Medical Services in Florida.

In June 2006, the EC145, designated UH-145, won the US Army’s Light Utility Helicopter (LUH) competition. EADS North America was awarded a contract for the first eight of 322 helicopters. A further 34 were ordered in November 2006. The first helicopter, re-designated UH-72A Lakota, was delivered in December 2006.

The helicopter can be kitted out for a number of missions including search and rescue, police and federal roles, surveillance, firefighting, mobile command centre, cargo, passenger and VIP transport, search and rescue, medical evacuation, training and
offshore support.

The helicopter has a mission endurance of three hours 25 minutes with 30 minutes reserves. The fast cruise speed is 245km/h.

The forward fuselage and nose section are based on the design of Eurocopter’s EC 135 helicopter and give the pilot improved visibility. The rotor blades have the same profile as used on the EC 135 helicopter. The blades provide a significantly reduced
vibration profile inside and outside the helicopter.

The helicopter is fitted with an all-glass Thales Avionics Meghas avionics suite with four-axis dual digital autopilot and is configured for dual- or single-pilot Instrument Flight Rules (IFR) operation. Meghas is part of Thales ‘Avionique Nouvelle’ suite
which is used in modular form on Eurocopter EC 120 and EC 155 helicopters.

The flight control display system comprises four SMD45H 4in x 5in LCD smart multifunction displays for navigation and flight control. It is controlled by a Pelican modular rack with modules
tailored to the application. Thales Avionics also provides the primary air data references (ADU 3000 air data unit and temperature probe), as well as the control panels.

The EC 145 can be fitted with EADS HELLAS obstacle warning system. HELLAS is based on an eyesafe laser radar.

EC 145 helicopters in service with the government of Georgia for VIP transport are being fitted with the EADS Defence Electronics Airborne Missile Protection System (AMPS), which includes MILDS missile warner and a countermeasures dispenser.

Mission systems for the police air support role can include: Wescam MX-15 electro-optic surveillance system, SkyQuest touch-screen video management system and the Gigawave digital video link, enabling the helicopter to be used as an incident command and control platform.

The cabin can be configured for eight passengers in a standard 3+2+3 arrangement or up to 11 passengers for high-density operations. The EC145 is fitted with Martin-Baker Aircraft’s passenger seats.

“The helicopter has a mission endurance of three hours 25 minutes with 30 minutes reserves.”

The cabin, cockpit and cargo compartment have a level floor throughout to give a spacious and easily reconfigurable cabin. The cabin is nearly 46cm longer and 13cm wider than the BK 117 helicopter.

The centre posts and door posts of the BK 117 C-1
have been removed and outsize lateral doors on both sides of the aircraft and wide opening rear clam shell doors give easier access. Wide windows give crew and passengers clear visibility.

A rescue hoist with variable winch speed and 90m of cable, rated at 270kg load, can be installed. An external cargo hook is rated at 1,500kg.

In the medical evacuation role the helicopter can carry two stretcher patients, a team of six medical attendants and medical equipment.

The tailboom is attached to the engine deck and the engine deck is above the cargo compartment roof. The helicopter has two Turbomeca Arriel 1E2 turboshaft engines each rated at 516kW maximum continuous power.

Four flexible bladder tanks are installed in the fuel compartments under the cabin floor. The fuel capacity is 757l which gives the helicopter a range of 670km at maximum take-off weight.