One x Turbomeca Arriel 2B1 turbine

Hover ceiling, out of ground effect 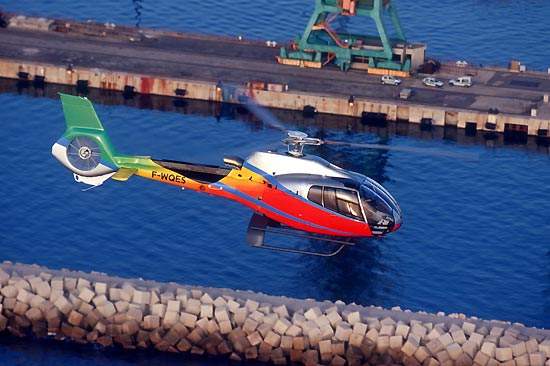 The single-engine EC 130 B4 is the latest member of Eurocopter's Ecureuil family of helicopters. 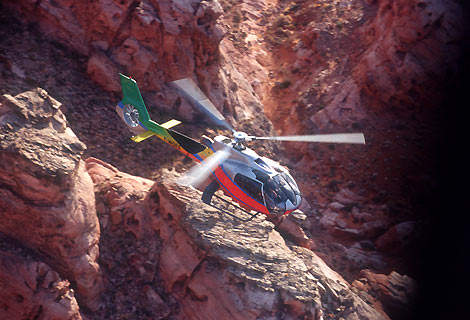 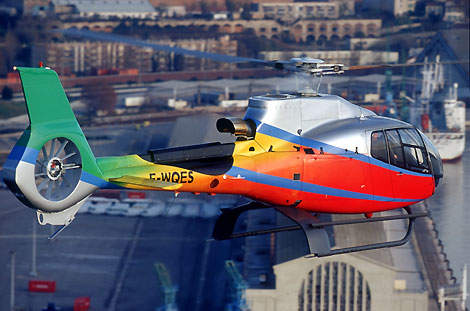 The EC 130 complies with all new noise reduction regulations, including US 'Grand Canyon National Park' standard. 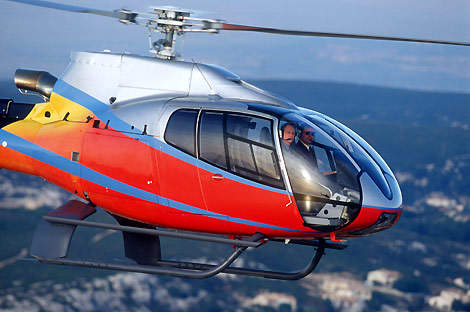 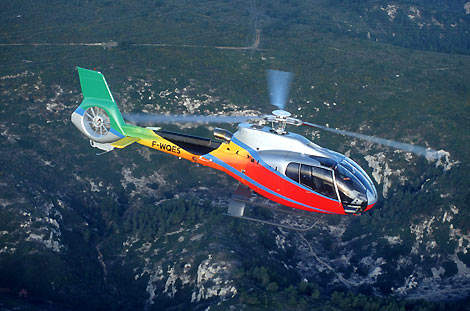 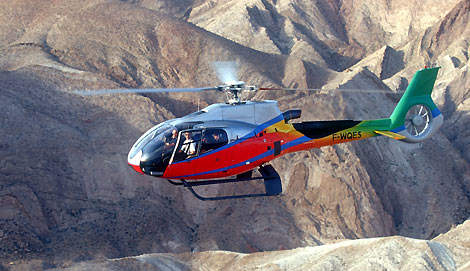 The EC 130 features a larger canopy with increased cabin visibility. 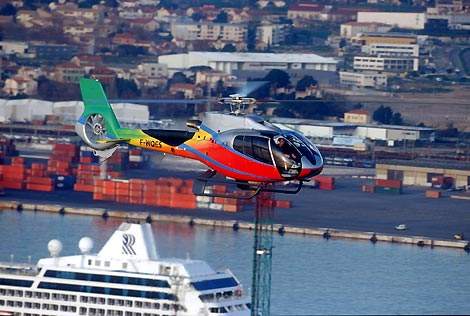 The single-engine EC 130 B4 is the latest edition of Eurocopter’s Ecureuil (Squirrel) helicopter family of light multi-mission helicopters. The helicopter can seat six or seven passengers and has a range of 640km and cruise speed of 235km/h.

The EC 130 entered service in June 2001 with the launch customer, Blue Hawaiian Helicopters, based in Hawaii. The 100th EC 130 helicopter was delivered in December 2004 to Kendall-Jackson Wine Estates of California.

Recent orders include three for Heli-Air Monaco, which operates scheduled services between Nice and Monaco, and three for Taylor Energy. Maverick Helicopters of Las Vegas ordered a further ten EC130 B4 helicopters in March 2007, which will bring the Maverick EC130 fleet to 45. In March 2007, Papillon Grand Canyon Helicopters ordered ten plus five options to add to its current fleet of ten.

The EC 130 has a number of features that ensure a noise level 7dB below ICAO’s Chapter 8 level. The noise levels meet or exceed all the current and planned legislation (including the US Grand Canyon National Park standard) for the next ten years. The
helicopter incorporates Eurocopter’s low-noise patented Fenestron tail rotor.

The array of ten blades in the Fenestron are arranged asymmetrically and are spaced at different intervals which substantially reduces the helicopter noise. In conventional
helicopters, most noise is from the tail rotors but, with the Fenestron rotor, the main source of noise on the EC 130 is engine exhaust and blade-tip noise.

Low-noise parameters have been designed into the flight systems, including the Full Authority
Digital Electronically Controlled (FADEC) engine and the controlled variable speed rotor.

The helicopter is a derivative of the proven AS 350 B3 design and uses many of the key components such as the main airframe, mechanical assemblies, main rotor, engine and the command controls. The main difference between the French-built EC 130 and
the German built AS 350 is that it has the Fenestron instead of the conventional tail rotor and rotor blades that rotate in the opposite direction.

“The EC 130 cockpit displays have been integrated to reduce the pilot workload and include a VEMD.”

The main airframe and rotorhead are constructed of glass fibre and high tensile strength aramid material. The main rotor blades, diameter 10.69m, are of composite materials.

The tailboom is fitted with an extended blast shield that protects the tail rotor drive. There is an additional layer of protective cover between the blast shield and the drive shaft cover. The top of the tail rotor is an operational wing which
creates lift along its leading edge and pulls the helicopter tail into the proper flight position.

The cowlings are of carbon fibre in order to achieve a low weight. The lifting ability is similar to that of an AS 350 B3. The aircraft keel is of high-strength chemically milled beams rather than stamped metal.

The single pilot helicopter is fitted with a conventional collective control. The cockpit displays have been integrated to reduce the pilot workload and include a Vehicle and Engine Management Display (VEMD) and a first flight limit indicator which
combines the three torque, true heading (T4) and gas generator rpm (Ng) displays.

The helicopter is equipped with a Honeywell ground proximity warning system integrated with a Garmin 430 global positioning system and a KMD-550 flight display to provide a three-dimensional image of the terrain.

The cabin, at 2.05m wide, is 25cm wider than the AS 350 and with 10% more cabin space allows seating arranged as four-across rear seats with two or three passenger seats at the front. In cargo carrying configuration the helicopter can carry the pilot,
up to 3.7m³ of cargo in the cabin and up to 1,160kg attached to the external sling.

For medical evacuation, the EC 130 can comfortably transport up to two stretcher patients and two doctors or medical staff.

“More than 3,150 helicopters of the Ecureuil / Fennec family have been ordered.”

The engine, the Turbomeca Arriel 2B, is rated at 632kW. The engine is equipped with dual channel Full Authority Digital Engine Control (FADEC) with a single analogue backup.

A high level of redundancy is built into the flight systems. There are dual
flight computers, multiple engine sensors and the metering valve is fitted with a dual stepper motor on a common shaft. The helicopter is also fitted with dual hydraulics systems.

The landing gear fairings are larger than on previous Ecureuil designs, which helps stabilise the back end of the helicopter and also creates lift under the aircraft.

The configuration and rigging of the controls results in the EC 130 landing flat, unlike the AS 350 which lands right rear first.