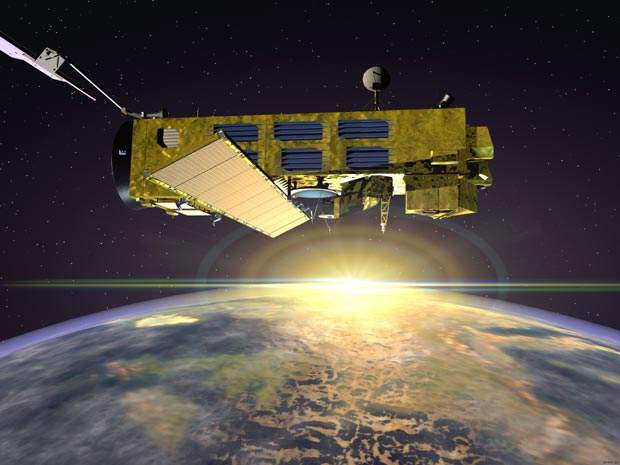 Envisat is an advanced polar-orbiting Earth observation satellite that was launched in March 2002 on an Ariane 5 rocket by the European Space Agency (ESA). 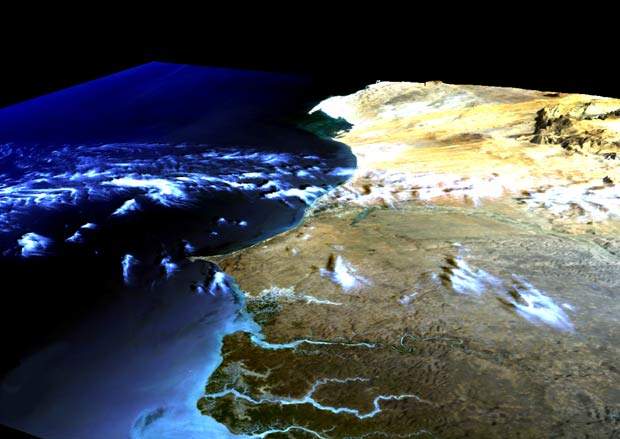 At that time of launch, Envisat was the largest European satellite ever to be launched. 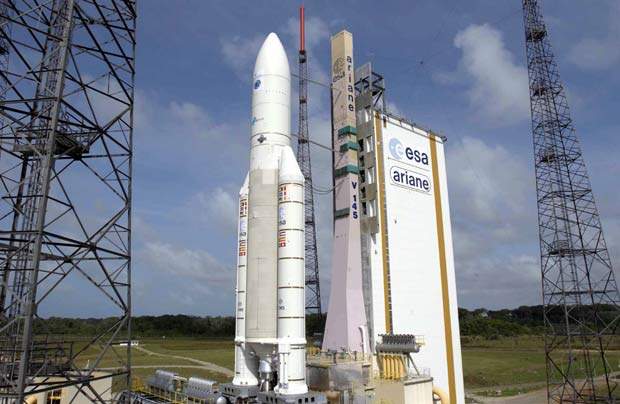 The Envisat satellite went through its last testing in January 2001 before being shipped to the French dependency Kourou for launch. Transportation was a major task involving the transport of machinery by air, land and water. 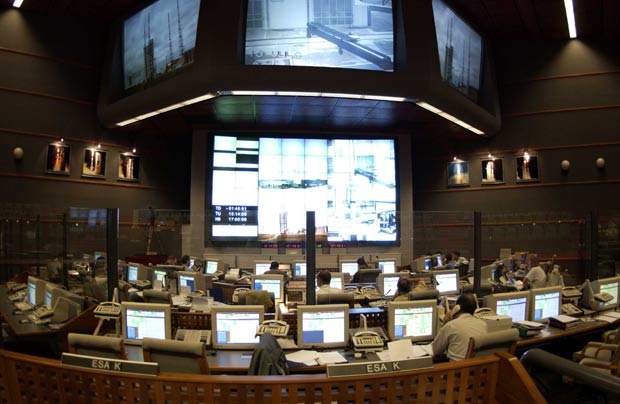 The flight operation ground centre has command and control of the satellite. The ground stations are at Kiruna, Fucino, Svallbard and Villafranca. The flight operations control centre (FOCC) is located at ESOC in Darmstadt, Germany. 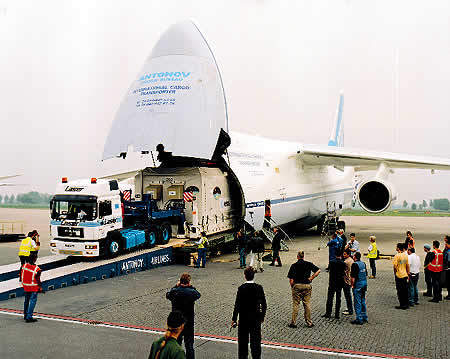 Loading the payload module on to Antonow 124 at Schiphol Airport, Amsterdam. 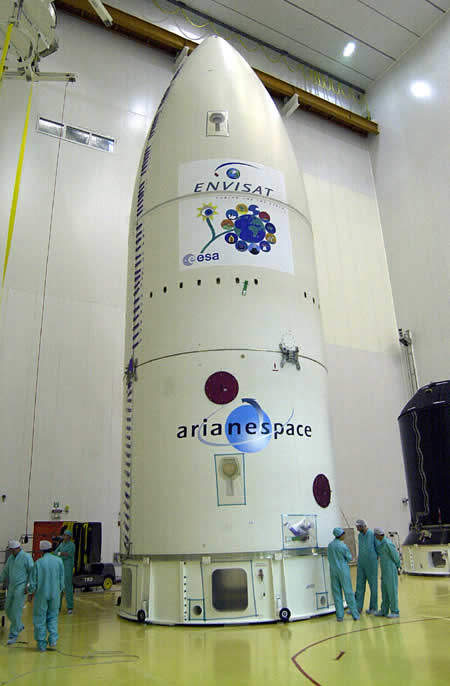 The Envisat launcher was assembled in Kourou in August 2001.

Envisat is an advanced polar-orbiting Earth-observation satellite that provides measurements of the atmosphere, ocean, land and ice. It was launched in March 2002 on an Ariane 5 rocket into an 800km polar orbit by the European Space Agency (ESA). Originally planned for five years, the life of Envisat has been extended till 2013.

The polar platform (PPF) has two elements: the service module (SM) and the payload module (PLM). The SM houses the main satellite support functions, such as command and control, communications with the ground, power, attitude and orbit control, and propulsion. The PLM houses Envisat instruments and PPF payload support equipment (data management and communications, and electrical distribution).

Around ten optical and radar instruments are carried by Envisat to gather data on the Earth’s atmosphere, the oceans and the polar icecaps. It also provides information on the various changes occuring in climatic conditions.

The ASAR provides maximum coverage, range of incidence angles, polarisation and modes of operation by operating in C band.

MERIS measures the solar radiation reflected by the earth with a spatial resolution of 300m, with 15 spectral bands in visible and near infrared and programmable in width and position. MERIS covers the entire globe every three days.

Envisat data will support Earth science research and allow monitoring of the evolution of environmental and climatic changes. It will also facilitate the development of operational and commercial applications.

The Envisat satellite went through its last testing in January 2001. The tests were conducted at the ESA Test Centre in Noordwijk, the Netherlands, before the satellite was shipped to Kourou for launch. For transport, Envisat was put into two large containers: a payload module container and a service module container. Getting all the equipment out to the French dependency was a major task involving the transport of machinery by air, land and water.

The launch had originally been intended for July 2001, but this date was thrown back after problems were discovered in the upper stage of the rocket. The ignition of the rocket’s Aestus engine was unsatisfactory. The satellite was finally launched in March 2002.

“Envisat was launched in March 2002 on an Ariane 5 rocket into an 800km polar orbit by the European Space Agency (ESA).”

When the satellite is not visible, the ground stations receive data through the ESA data relay satellite system Artemis. The flight operations control centre (FOCC) is located at ESOC in Darmstadt, Germany.

Envisat also has a number of other companies involved in the construction. Thomson-CSF Services & Systemes Sol Spatiaux is prime contractor responsible for overall programme management, central procurement of hardware and software, system engineering, and system validation and acceptance for the payload data segment.

The PPF construction is led by Matra Marconi Space in Bristol, UK, which is also responsible for the final satellite integration and preparation for launch. Dornier Satellitensysteme, Germany has major development responsibility for payload equipment bay, which is part of the payload module, and Matra Marconi Space in Toulouse, France, is leading the service module development.