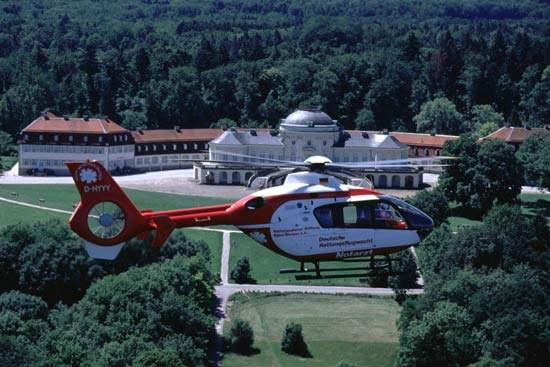 The EC 135 twin-engined helicopter, shown here in service with the German Air Rescue. 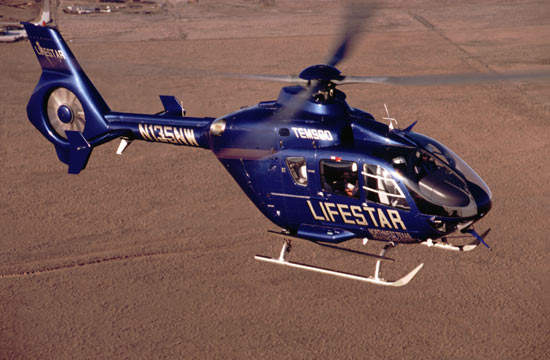 The EMS version in operation with LIFESTAR of Northwest Texas. 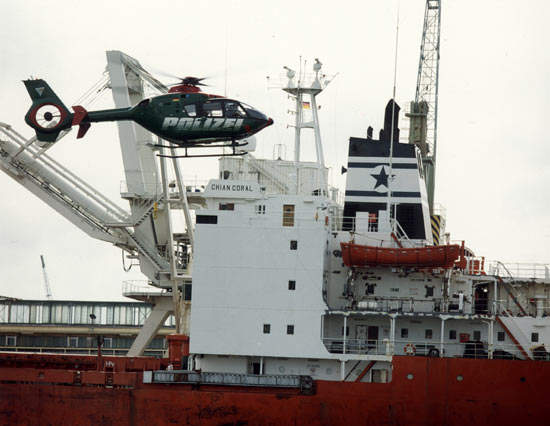 The EC 135 can be fitted with a choice of mission systems for law enforcement. 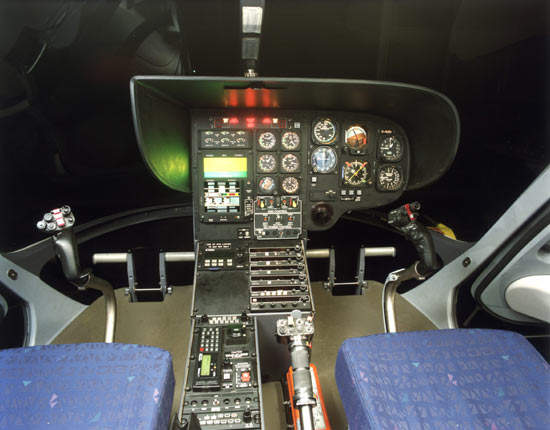 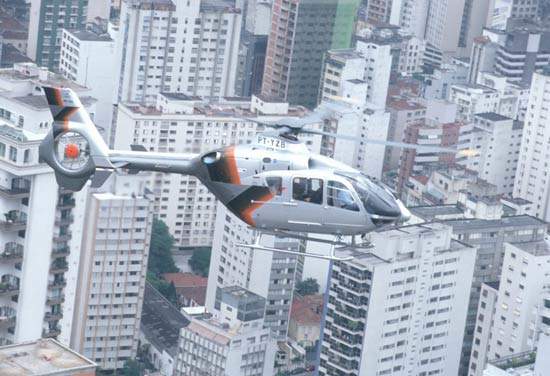 Over 250 EC 135 helicopters have been delivered since it entered service in 1996. 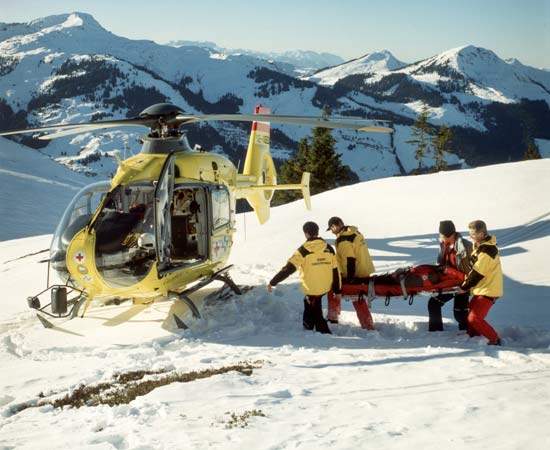 EC 135 in the fleet of OAMTC air ambulance service of Innsbruck, Austria. 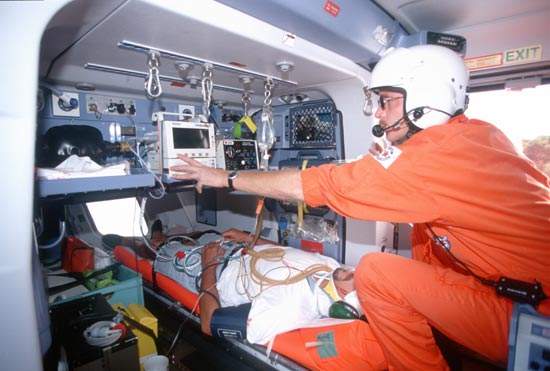 The EC 135 can carry two stretcher patients and up to three medical attendants. 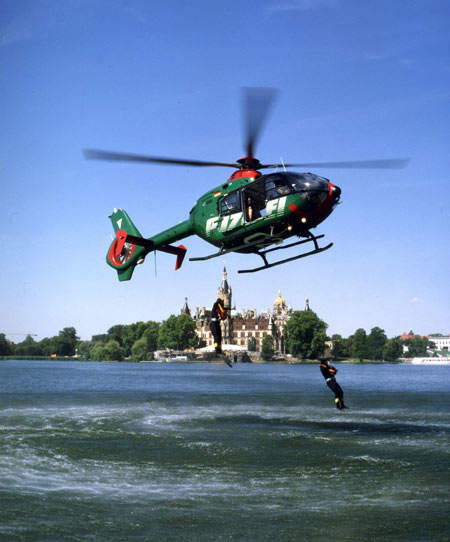 The EC 135 is offered with either Turbomeca Arrius 2B2 or Pratt and Whitney Canada PW206B2 engines. 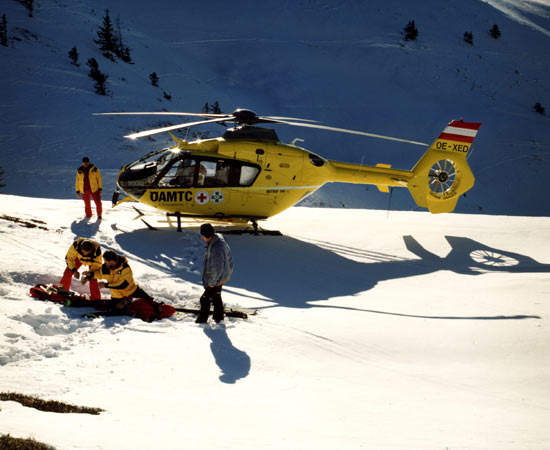 Over 90 EC 135 are being used in air rescue operations worldwide.

Eurocopter’s EC 135 is a very powerful lightweight twin-engine multipurpose helicopter and is operational worldwide. Over 680 have been delivered since the helicopter entered service in 1996 with German Air rescue company Deutsche Rettungsflugwacht and the helicopter is flown by over 100 customers in 27 countries. A military version, the EC 635, has also been developed and has entered service with the Royal Jordanian Air Force.

In November 2003, Eurocopter signed an agreement with Eurocopter Romania (a joint venture with IAR) for local assembly of the EC 135 in Brasov.

In October 2007 the Austrian police ordered eight and, in November 2007, the Netherlands Police ordered six EC135.

The helicopter is available as the EC 135T2, powered by the Turbomeca ARRIUS 2B2 engine or the EC 135P2, powered by the Pratt & Whitney PW206B2. The EC 135 can be configured for passenger and VIP transport with up to eight seats, law enforcement, emergency medical service, search and rescue and other roles.

In February 2006, Eurocopter announced a major upgrade for the EC135. The new helicopter, designated EC135 T2i/P2i, has an increased take-off weight of 2,910kg and a reduced empty weight of 1,445kg, allowing a payload increase of 80kg.

This increased useful load translates to either one additional passenger, more fuel for 100km extra range or 30 minutes more endurance. Other improvements include an additional 180kg in hover weight and 2,000ft in hover altitude.

The new helicopter received EASA certification in February 2006 and deliveries begin in September 2006. The upgrade is also available as a retrofit.

The helicopter incorporates Eurocopter’s low-noise patented Fenestron tail rotor. The array of ten blades in the Fenestron are arranged asymmetrically and are spaced at different intervals which substantially reduces the helicopter noise.

The four-bladed, bearingless, main rotor system is made of fibre-reinforced composite. The built-in anti-resonance isolation system also contributes to low vibration and noise level. The external noise level is 6dB lower than the regulatory specification and allows the operation of the helicopter in highly populated areas and in close approach to hospitals.

Police and federal versions of the EC 135 are operational with the Basque Police Force of Spain, the Federal Border Police of Germany, State (Lander) Police of Bavaria and Saxony in Germany, Travis County Police in USA and police forces in Sweden, Ireland, Kuwait, Chile, Kuwait and the UK. The helicopters are used for patrol, airborne surveillance, VIP and dignitary transport and firefighting.

Television and video systems can be installed in the cabin. Cabin doors and viewing windows suitable for surveillance operations can be fitted.

The Emergency Medical Service helicopter can be flown by one or two pilots. The helicopter can carry one or two stretcher patients and up to three doctors and medical attendants. Different medical installations are tailored to the operating organisation’s need.

Loading and unloading is carried out quickly and easily through the extra large sliding doors and the rear clamshell doors. In winching operations, the patient is readily and safely transferred into the hovering helicopter. A combination of an externally mounted load mirror and a backed-up double hook system is installed to ensure safe and secure rescue missions for the patient, flight and medical crew.

Baggage and cargo can be loaded through the rear clamshell doors.

“Eurocopter offers a choice of two engine types for the
EC 135.”

EC 135 helicopters of the German Federal Border Guard are being fitted with the EADS Dornier Hellas helicopter warning system. Hellas is based on a laser radar and received certification in Germany in October 2003. The first Hellas-equipped helicopter was delivered in March 2007. Czech Police helicopters have been fitted with EADS / Dornier DKG4 moving map system.

The standard fuel tanks have a capacity of 673l which gives a range of 620km. An additional long-range fuel tank can be fitted as an option which extends the range to 880km.